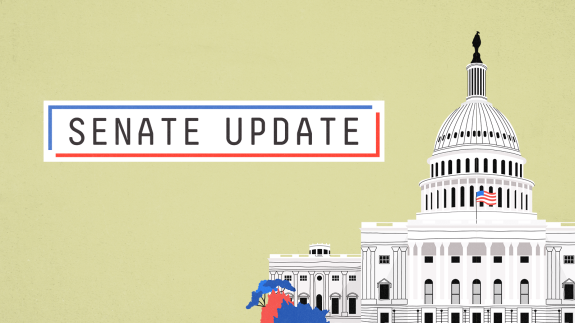 Democrats are favored to take back the Senate this year, according to our forecast. And that’s true, regardless of which of the three versions of the forecast you look at.

In fact, the Lite (polls only), Classic (polls and fundamentals), and Deluxe (polls, fundamentals and expert race ratings) don’t currently show that much difference. In our Deluxe version of the forecast, which is the default version, Democrats have a 74 in 100 chance of winning a majority, and in both the Classic and Lite versions, Democrats have at least a 77 in 100 shot.

This reflects the fact that both the polling and fundamentals contain good news for Democrats. If we dig deeper into the different versions of our forecast, we can see whether polls show more or less competitive races than the fundamentals and election handicappers’ ratings suggest.

Topline take away: In these competitive races, Democrats have a greater than 1 in 2 shot in winning in 9 of these races, according to the Deluxe version of our forecast. And in many of them, Democrats’ odds might be even higher based on the latest polls. Georgia’s special election is a weird exception, since there are more than two major-party candidates running, but Georgia’s other Senate race plus the contests in Maine and North Carolina show that Democrats have gotten some really good polls recently. This is notable because all three are Republican-held seats where Democratic victories could be enough to spell a Democratic majority in the Senate — depending on the presidential race — as the GOP currently has a 53 to 47 majority.

Let’s start with Georgia’s other Senate race (the one that isn’t a special election). This race, which pits incumbent Republican Sen. David Perdue against Democrat Jon Ossoff, falls in the “toss-up” zone in the Lite edition of our forecast — where neither party has a 60 percent chance or better of winning — while it leans toward the GOP in the Deluxe version. That difference comes down to Georgia’s traditional Republican lean, which is at odds with some polls that show Ossoff leading Perdue, but it’s possible that these polls are picking up on a move away from the fundamentals in Georgia. According to our adjusted average of Senate polls in this race, Perdue only leads by 0.7 points.

In Maine and North Carolina, meanwhile, the different versions of the forecast agree that Democrats have an advantage, but in both states the polls point to a much stronger edge. Take Maine. If we look just at the polls-version of our forecast, Democrat Sara Gideon’s odds jump from around 6 in 10 to about 3 in 4 thanks to Gideon’s 6-point lead in our adjusted average of Senate polls. This could prove important for Gideon, too, because of Maine’s ranked-choice voting rules, which reallocate votes based on voters’ second choice (or third choice, etc.) until one candidate has a majority. The bigger the lead for Gideon, the harder it will be for Sen. Susan Collins to catch up, even if the incumbent is the second-choice candidate for many third-party voters. (Of course, this assumes no one wins a majority of first-choice votes, which could happen). And in North Carolina, it’s a similar story if we look at just the polls: Democrat Cal Cunningham’s odds jump from around 3 in 5 to almost 3 in 4. He was involved in a sexting scandal in early October, but that doesn’t seem to have greatly altered the trajectory of the race.

Some other contests also see meaningful Democratic improvement in the Lite version of our forecast, albeit not as much as in those other three states. In Arizona, Democrat Mark Kelly has long outpaced appointed Republican Sen. Martha McSally in the polls, and as such, his chances get only better in the polls version of our forecast, even though the Deluxe version takes into account his incredible fundraising edge. And in Michigan, the polls give Democratic Sen. Gary Peters a slightly cushier edge against Republican John James, who has managed to run nearly even with Peters in fundraising. In the GOP-held seats in Alaska and Kansas, the Democratic candidates are pretty clear underdogs, but their chances do tick upward in the polls-only version of the forecast.

But the polls don’t give Democrats a better shot at winning everywhere. Importantly, the Lite version of our forecast points to Alabama Democratic Sen. Doug Jones being even more of a goner than the Deluxe version. Jones was always going to have a difficult time in a state that President Trump might win by 20 points at the top of the ticket, and his 11-point deficit against Republican Tommy Tuberville in our adjusted average of Senate polls in this race looks like too much to overcome. A GOP pickup in Alabama will force Democrats to have to pick up a fourth seat the GOP currently holds if they want to have a shot at the majority, too.

Beyond Alabama, the polls also give Republicans a slightly better shot in two more peripheral races: Minnesota and New Mexico, seats currently held by Democrats. In Minnesota, Democratic Sen. Tina Smith won a special election in 2018 but is now competing for a full term, and she faces former Rep. Jason Lewis. Smith has a clear fundraising edge, but she leads by a little less than 8 points in our adjusted polling average of the race, so the Lite version doesn’t view her as quite so sure a bet. The same is true of Democratic Rep. Ben Ray Luján in New Mexico, where he’s favored against Republican Mark Ronchetti. With Democratic Sen. Tom Udall’s retirement, the lack of an Democratic incumbent defending the seat should help Republican chances, but even with that, the polls think it’s a more competitive race than either the fundamentals or experts.

All in all, though, the polls-only Lite version of the forecast gives Democrats a better shot at winning many critical seats in the battle for Senate control. And that has an impact not only on their overall chances of winning the Senate, but also on just how big of a majority they might be able to win. Whereas the Deluxe version gives Democrats an 80 percent chance of winning between 48 to 55 seats, the Lite version gives them an 80 percent chance of capturing 48 to 57 seats. In other words, if the polls are a better predictor than the fundamentals and experts this year, Democrats may be able to win a bigger majority than we might otherwise expect.