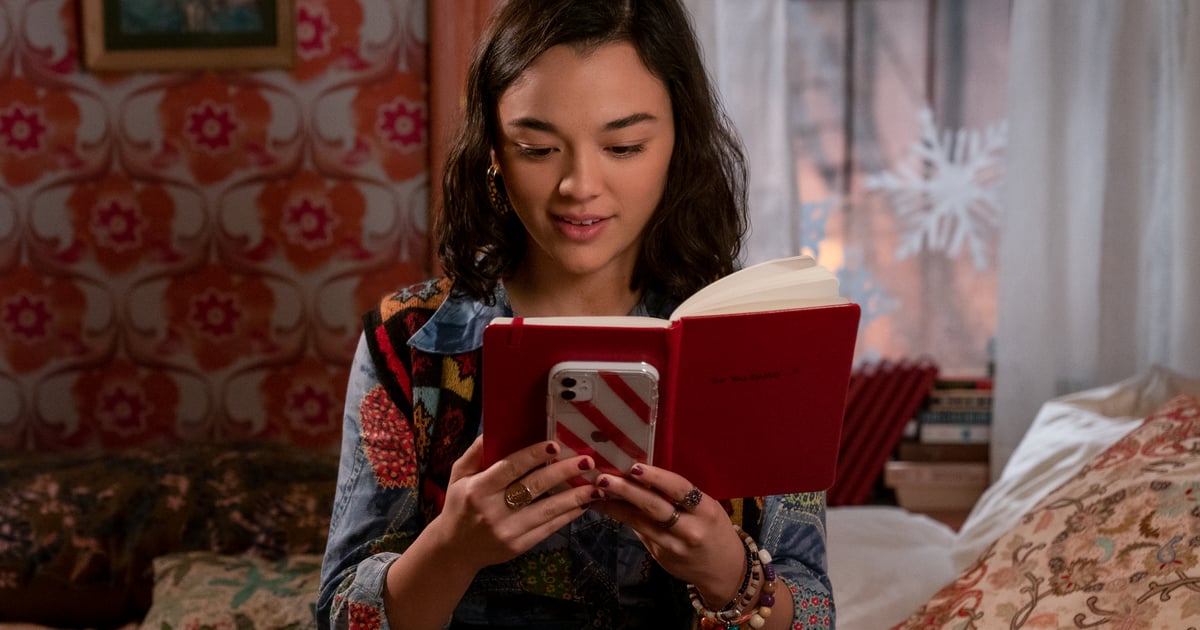 The magic of Christmas can take shape in different ways: spending more time with loved ones, investing in meaningful gifts, or feeling a communal sense of joy and kindness. For Midori Francis, it manifested in the form of a television role. The 26-year-old actress, who you might recognize from 2019’s Good Boys, is bringing her love of the holiday season to Netflix’s Dash & Lily, an adaptation of Rachel Cohn and David Levithan’s 2010 novel, Dash & Lily’s Book of Dares.

The show — premiering on Nov. 10 — stars Francis as the titular Lily, a fun-loving Christmas enthusiast who connects with a jaded cynic named Dash (Austin Abrams). Their relationship is out of the ordinary, seeing as it develops when they start penning messages and prompts to each other in a secret notebook that they leave at locations throughout New York City. It’s a much more enjoyable, albeit time-consuming, version of a dating app set against the backdrop of Christmastime in the Big Apple.

“Lily’s very verbose, and you don’t often see young women speaking a lot or having a lot of thoughts. I think that’s changing, but that immediately jumped off the page.”

The charm of NYC during the holidays is partially what attracted Francis to the project. She hadn’t heard of the book prior to learning about the show, but she eventually delved into all things Dash & Lily when she became interested in the role. “I had a sort of epic summer of jobs, and I was taking a little two-week rest. So, I got an audition,” Francis told POPSUGAR. “I saw ‘Christmas,’ then I read the scenes, and I was like, ‘Oh, this girl has spirit. I have to go for this.’ I was joking with my family and my friends like, ‘Well, today, I went in for someone who loves Christmas. Can you believe that? That’s crazy.’ Because everyone knows that I love Christmas.” Francis then bought the book as the audition process progressed and fell in love with the source material.

Francis was also intrigued by her character’s lively energy. “Lily’s very verbose, and you don’t often see young women speaking a lot or having a lot of thoughts,” she noted. “I think that’s changing, but that immediately jumped off the page. For my audition, she was talking to a guy in the bookstore about Franny and Zooey and Seymour: An Introduction, which are two books that she liked, and she’s just spitting out information. I liked how much she had to say.”

Lily’s effusive ways present an amusing contrast to Dash’s weary, reserved aura. She’s a breath of fresh air not only within the series, but within the sphere of YA rom-coms. “A lot of the shows that are out now about young adults — some of my friends are on them — are very dark, which is amazing because it gives people a place to see that reflected, and it doesn’t shy away from those truths,” Francis said. “However, I think that we can be oversaturated with pain, darkness, and all that. So, when I saw this, I was like, ‘Wow, something hopeful and optimistic.’ There was love, and it wasn’t in a corny way.”

Given the premise, Francis and Abrams didn’t spend much time filming together, so they had to cultivate a bond in their own special way. “We started a Midori/Austin notebook to parallel Dash and Lily,” Francis revealed. “We got to know each other via writing to each other. Then on days when we overlapped, we were like, ‘Oh, hey, Austin,’ and ‘Hey, Midori,’ and then we’d sit down and talk about how things are going.” The two would also meet up for lunch or dinner to discuss the show, which helped them become good friends despite their different filming schedules.

“It’s been amazing to get out of my apartment, go to work in the city I live in, and find — this is going to sound funny — but find magic here.”

Francis formed a new relationship with NYC, as well. Although she lives in the city, Dash & Lily helped her appreciate the concrete jungle’s allure even more. “You can sort of take it for granted when you live here,” she said. “You get bogged down by the daily grind or you have a day off, and you just want to stay inside.” However, Francis was able to see NYC in a new light during production, fully taking in spectacles like Central Park and the constellation-painted ceiling at Grand Central Station. “It’s been amazing to get out of my apartment, go to work in the city I live in, and find — this is going to sound funny — but find magic here,” she said.

Another work perk Francis recalled was letting loose during her favorite scene: a dance sequence, which she said “you will be graced by soon enough.” She’s quick to warn that she’s not a professional, saying, “I, Midori, am not a dancer, and I find it very scary. I love to dance alone in my room, but I truly find it disturbing.” But she was able to toss her cares aside to capture the spirited moment after showrunner Joe Tracz connected her with a choreographer, whom he knew from working on the Broadway musical Be More Chill. “He was all about finding moves that felt like me,” Francis said. “I did this leg swing that people liked, and as I started to get into it, the whole room got into it. Then [in the scene], I get named a queen and thrown up in the air — something that would never happen in my real life. But it was fun to do something that I’m scared of in front of everyone.”

Needless to say, Francis is excited to gift viewers with a cheerful watch and readers with an endearing adaptation. “We start in the world of the book for sure, and it’s very much an adaptation, but there are definitely things in the series that don’t happen in the book or happen differently,” she teased. “Maybe Dash does something in the book, but in the TV show, we decided that it would be more beneficial for Lily to do it.” And as nerve-wracking as it can be bringing a beloved novel to life, Francis is confident that fans will love it. “Austin’s really amazing, and I don’t think we’ll let them down,” she said.