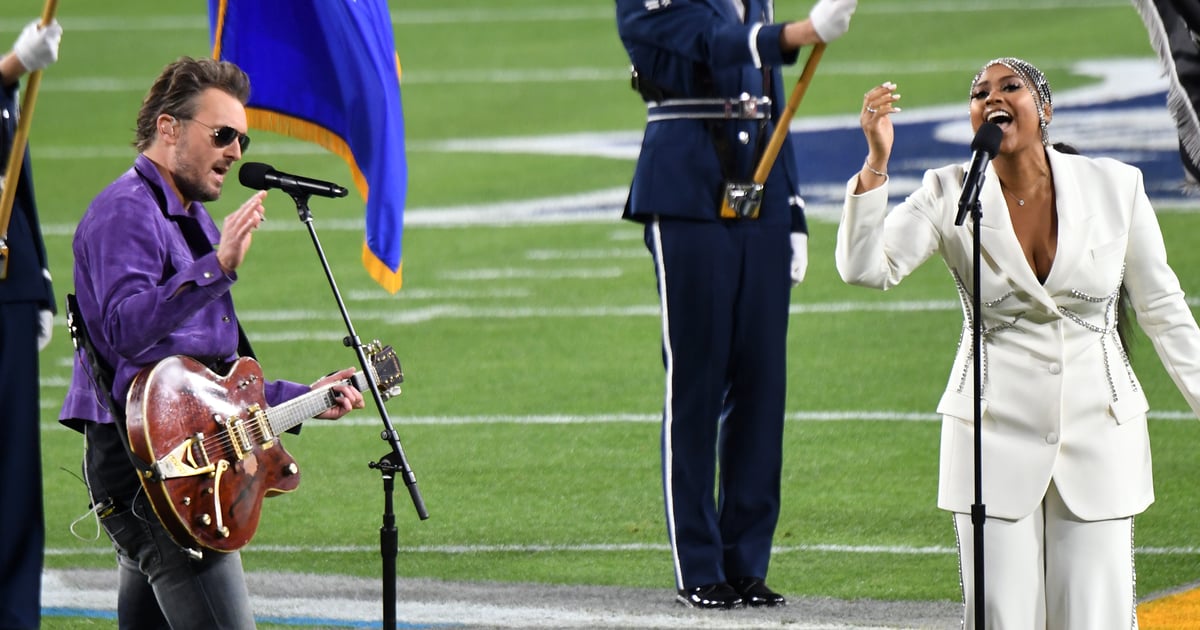 All eyes were on Jazmine Sullivan and Eric Church as they performed the national anthem before Super Bowl LV on Sunday, and they most certainly rose to the occasion. The R&B star and country crooner teamed up for the first time ever to sing “The Star-Spangled Banner” ahead of the championship game between the Tampa Bay Buccaneers and Kansas City Chiefs, each bringing their own musical styles to the vocally demanding gig.

Situated in the middle of the field and surrounded by thousands of fans at Raymond James Stadium in Tampa, FL, the Grammy-nominated artists took turns singing verses of the song as fireworks erupted overhead. Sullivan dressed to the nines for the occasion in a white embellished pantsuit and shiny diamond headpiece, while Church wore a purple jacket and played guitar for the performance.

A little over a week before the big game, Sullivan opened up to Entertainment Tonight about how she hoped her joint performance with Church, an admittedly polar-opposite artist, sends a poignant message to viewers. “I just hope that it brings unity and it shows that you can be from two different parts of life and come together for a good common cause.” Meanwhile, Church revealed that he originally “never” wanted to be a national anthem singer because it’s such a challenging task, but he totally changed his mind after witnessing Sullivan’s vocal chops. “I’m not missing a chance to sing with her,” he said. “Once I heard her voice, I said, ‘Okay, I’m in.'”

Sullivan and Church’s Super Bowl team-up comes one year after Demi Lovato nailed the national anthem before the Kansas City Chiefs took on the San Francisco 49ers in the 2020 Super Bowl. Watch their stirring rendition in full above, and then catch up on all the entertaining Super Bowl commercials you may have missed.