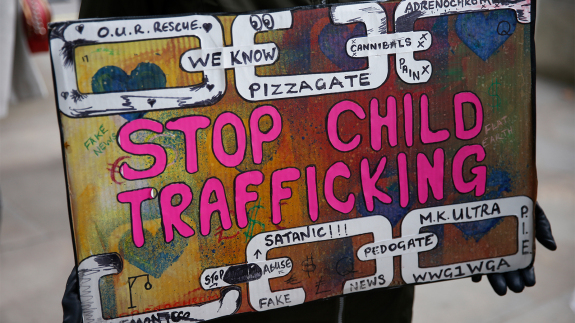 It’s hard to argue against a phrase like “save the children.” Which, presumably, is why QAnon uses it as a hashtag. The growing online conspiracy cult has co-opted the phrase to push falsehoods about pedophiles who run the world. But in promoting its radical worldview, QAnon has made life difficult for the organizations actually trying to save children. And the results could be putting kids at risk.

QAnon is a baseless conspiracy regardless of how deep you go, but its fixation on pedophilia is particularly unmoored. Devoted QAnon followers believe — to varying levels of detail — that there is a secret cabal of powerful elites who run an underground pedophilia ring, and that President Trump is currently working to bring these evildoers to justice. If you go all the way down the rabbit hole you’ll find theories about Bill Gates injecting tracking devices into every citizen, blood libel, devil worship and draining kids of a chemical compound called adrenochrome to become immortal. But the underlying connective tissue of QAnon is that bad people, mainly Democrats, are trafficking children and Trump is the only one who can stop them.

Over the summer, Q followers began using #savethechildren to spread the conspiracy theory, and it worked. From Aug. 9 through Aug. 15, more than 12,000 public Facebook posts used the hashtag, according to the social media tracking tool CrowdTangle. The rest of the year, the hashtag tended to garner fewer than 200 posts per week.

But most of the content shared using #savethechildren was based on a Q-fueled and completely warped picture of what child trafficking looks like in this country. And that has made life difficult for the people who actually do anti-trafficking work.

“It’s extraordinarily frustrating,” said Lisa Goldblatt Grace, co-founder and executive director of My Life My Choice, an anti-trafficking nonprofit. “We’ve worked so hard for the last 18 years to shift the narrative and have people understand this is happening in our communities. QAnon instead gives folks this incredibly sensationalized ‘other’ to fear and be angry about.”

In reality, child trafficking in the U.S. doesn’t look like a bunch of Hollywood and D.C. elites performing satanic rituals on children they stole from suburban playgrounds. Instead, kids who are sexually exploited are often poor, children of color, immigrants, or some combination of the three, and they’ve often been in the child welfare system or run away from home. In 2018, 1 in 7 kids who were reported as runaways to the National Center for Missing and Exploited Children were likely victims of child sex trafficking, according to UNICEF.

“We see minors who are in a vulnerable position — maybe they’ve run away from home, maybe they’ve been kicked out of their home — and then engage in sex acts for money in order to have food to eat and a place to stay,” said Jean Bruggeman, executive director of Freedom Network USA, an anti-trafficking group. “Almost never is there any kind of abduction or solely a use of physical force or locking people away. It’s generally much more subtle coercion.”

The spectre of pedophilia and child sex trafficking has been a part of the QAnon lore since the very beginning. Q, the anonymous poster who feeds the conspiracy by claiming to “drop” highly classified government information on image boards known for attracting white supremacists and violent misogynists, has been alluding to underground child trafficking rings in his messages for years. “Perhaps [Trump] could not stomach the thought of children being kidnapped, drugged, and raped while leaders/law enforcement of the world turn a blind eye,” reads one message from November 2017.

“Some of the earliest drops are about what the Clintons do to children, what the deep state does to children, satanic trafficking and sacrifices,” said Mike Rothschild, a conspiracy theory researcher currently working on a book about QAnon.

The #savethechildren hashtag, however, didn’t come onto the QAnon radar until this year. The hashtag had been used before (notably to promote the charity Save The Children, which has been around for a century and is unaffiliated with QAnon), but in July and August, the number of posts using it surged, and a major portion of those posts were Q-affiliated. This was likely due in part to the pandemic, Rothschild said: With more people stuck indoors, out of work and feeling hopeless, it’s easy to get sucked into an online world that claims to have all the answers. But it also coincided with a crackdown from Twitter to remove Q-related content. Suddenly, Q followers couldn’t spread their message as openly as they had before, so it’s possible that’s why they adopted a hashtag that was so wholesome, social media sites couldn’t possibly ban it. It was more of an organic growth than any kind of coordinated campaign, said Annie Kelly, a PhD candidate at the University of East Anglia who studies far-right political movements and digital culture.

“It’s incorrect to frame it as some kind of mastermind pulling the strings,” Kelly said. “The #savethechildren evolution wasn’t a coordinated effort to hide QAnon’s agenda, but it had the effect of drawing in people to QAnon without realizing it’s QAnon.”

To some extent, this growing population of people concerned about child trafficking has translated into a genuine support for organizations that work to end it. I spoke to representatives from six anti-trafficking groups and four told me they have seen a recent increase in donations. Freedom Network USA, for example, received 102 donations totalling $23,200 from April to September this year, more than 50 times the amount it received in the same period last year, when it got five donations totalling $428. Other organizations declined to give specific figures but said they had seen an increase in donations this year, particularly over the summer.

That said, it’s really hard to say for sure how many, if any, of those donations were from Q followers. “Nobody was sending in donations with a note saying ‘In Q we trust,’ you know?” Goldblatt Grace said. And the increased attention has come with plenty of drawbacks. Polaris, the charity that operates the National Human Trafficking Hotline, had to issue a statement discouraging people from reporting that children were not being sold inside expensive cabinets online because callers were flooding its phones with a Q-adjacent conspiracy.

The inundated hotline is one example of a problem each of the anti-trafficking representatives I spoke to raised: Even if QAnon is bringing people’s attention to child trafficking in general, it’s focusing that attention specifically on a sensationalized, largely inaccurate picture of what trafficking looks like. And that can pull focus and resources away from the actual problem.

“It can lead to not only a misunderstanding of the issue, but also a wrong response,” said Borislav Gerasimov, the program coordinator for communications and advocacy at the Global Alliance Against Traffic in Women.

As an example, Gerasimov cited the gunman who fired inside a pizza shop in 2016 because he wrongly believed it was the location of an underground pedophile ring, a conspiracy theory called Pizzagate that is a precursor to QAnon. “If you portray human trafficking as something that a secret cabal is doing, the solution becomes guns and surveillance. This is totally not the solution to trafficking.”

The solutions that anti-trafficking groups advocate for aren’t about raiding pizza shops or decoding Justin Bieber’s headwear choices, they’re about improving social programs so kids don’t fall through the cracks and end up in situations that leave them vulnerable to exploitation. That’s not as easy of a sell to the QAnon crowd.

“I don’t find that I’m able to translate the kind of fervor and excitement and investment people get for #savethechildren into an investment and focus and excitement in caring for the most marginalized among us,” said Goldblatt Grace.

Each of the nonprofit representatives I spoke to said they’re grateful for any donation and are hopeful the increased attention can create opportunities for outreach and education. But for that to happen, Q followers would have to give up on some of their most cherished beliefs and admit that the real problem, while no less concerning, looks less like the action movie playing in their head and more like the rest of America’s problems.