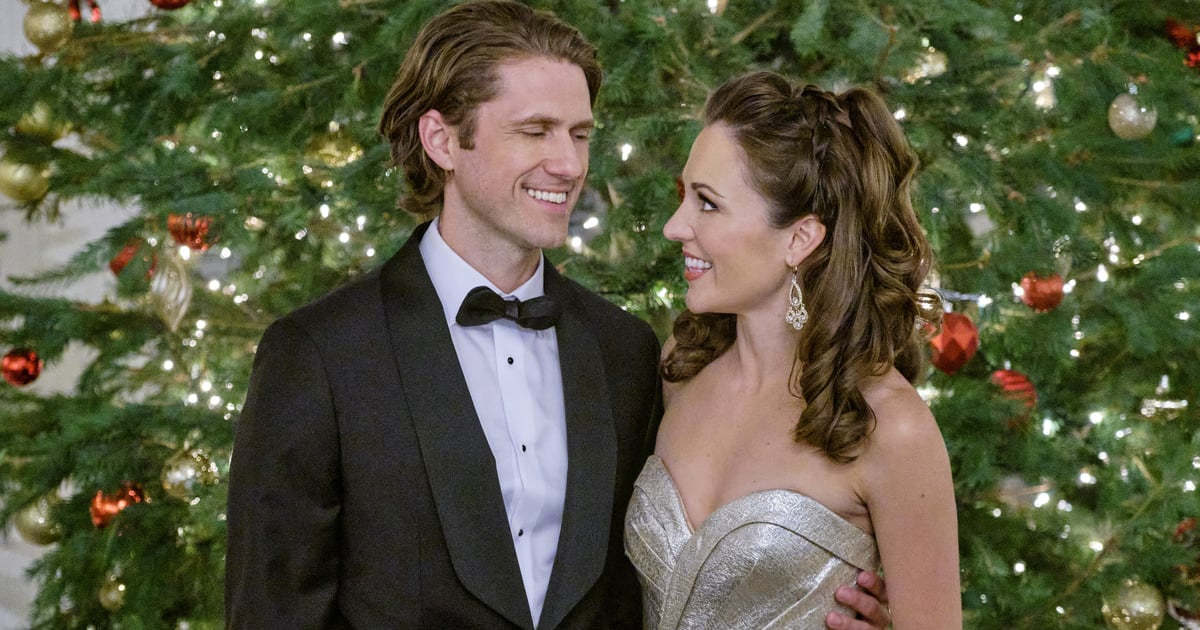 Anyone who has ever heard Aaron Tveit sing knows he’s basically a Disney prince in real life, so it’s perfectly fitting that he plays royalty in his first Hallmark movie. In One Royal Holiday — which premieres on Oct. 31 on the Hallmark Channel — the actor plays a prince named James who begrudgingly finds himself stranded in New England days before Christmas due to a snowstorm. After a chance encounter with a bubbly nurse named Anna (Laura Osnes), though, James ends up spending the holidays at her family’s Connecticut inn, and a sweet romance slowly begins to unfold.

Having known Osnes for a long time, Tveit said he was excited to work with the fellow Broadway star in the movie. Even though the two have sung together on various occasions, Tveit noted that they had “never worked together properly.” Plus, the fact that Osnes has a few Hallmark movies under her belt was an added bonus. “She was showing me the Hallmark ropes,” he told POPSUGAR. Of course, Hallmark couldn’t have a movie starring Broadway actors like Tveit and Osnes without incorporating a musical number. The two sing “Winter Wonderland” for the film. “It was amazing,” Tveit said about recording the holiday track. “I’ve always secretly wanted to record a Christmas album. Maybe that’s something I will still do one day. So it was so fun, and the people at Hallmark were so open to that. Laura and I were talking about it, and she kind of had this idea of like, ‘Why don’t we sing something?’ And we presented it to [Hallmark] as one of the credit sequences, and there were no questions asked, [and they were] immediately on board and made it all happen.”

Another treat for fans is Tveit’s accent in the movie. Though Prince James hails from a fictional country called Galwick, his accent was inspired by real-life royalty. “We looked at Prince William and Prince Harry in terms of the wardrobe palette and things like that. We wanted to look to those people to see how a little bit of heightening and wardrobe and being a little more traditional could help sell that we were royalty. In terms of the accent, there’s just something about British RP, a traditional British accent, that I think does the same thing. There are things in the script that are very much written in that cadence, and if said [without] the accent, come off a bit strange. I was very fortunate that when I was preparing for the Les Misérables movie, I had almost six weeks of one-on-one dialect training for that movie, and that was all RP. So it was nice to kind of pull those notes back out. I kind of leaned on this gift that I was given those years ago. So hopefully it came out OK.”

While Tveit’s fans are certainly excited to see him in a holiday Hallmark film (and cozy sweaters), one thing that drew the actor to the film was the heartwarming story. “This was kind of a perfect storm because I’ve always been a fan of [Hallmark] movies, especially their Christmas movies,” he said. “I read the script, and I just thought it was just a beautiful, simple story that was kind of timeless. I was actually very moved by the script, and I just thought it was just such a bright, warm story. Especially with the backdrop of everything happening in our world, it’s just a great time to be able to come together and enjoy a nice evening with a great story.”

“I’m always looking for characters and people that have a journey to go on.”

Having played a range of different characters over the years — from Mike Warren on Graceland to Christian in Broadway’s Moulin Rouge, which recently earned him his first Tony nomination — Tveit noted that he’s always been drawn to characters who change. “That’s what I love in this one script and great films and great stories and great plays, it’s all about characters changing,” he said. “I’m always looking for characters and people that have a journey to go on.”

Though he has tackled many different genres and mediums in his career, he noted that he’ll always have a soft spot for musical theater. “I do really love them all equally, but there’s something about being on stage [and] having that experience with the audience every night, hearing the applause, [and] that laughter. There’s just such an energy on stage and in a theater, in a live performance, that you can’t get anywhere else. As much as I love being on set and I love the craftsmanship and artistry that that takes, if you’re in a comedy, nobody’s laughing because they can’t. There’s just nothing like being on stage. But then the trade-off to that of course is being on stage and doing a show eight times a week is the hardest thing you can probably do as an actor. So it’s a delicate balance, and I’m just very grateful that I’ve kind of gotten to walk in all of these different avenues.” Seeing how Tveit effortlessly masters each project he works on, I for one can’t wait to see what he does next. Fingers crossed it’s a Christmas album!