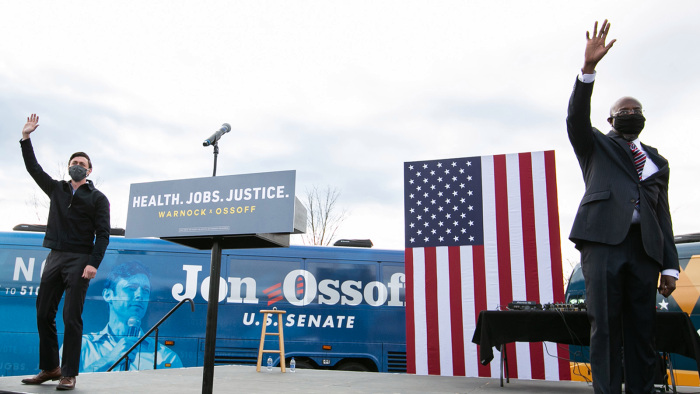 It’s hard to overstate how precedent-shattering this election was. Going into 2020, it was a political axiom that Democrats always fared worse in runoff elections than in the general; Republicans had improved on their margins in seven out of the eight previous runoff elections in Georgia history. But this week, Ossoff and Warnock won despite Republicans getting more votes than Democrats in both races in November.

That might have been made possible by the fact that turnout was completely off the charts. Over 4.4 million people voted in Tuesday’s election — more than double the number who voted in Georgia’s 2008 Senate runoff, which was previously the highest-turnout runoff in Georgia history. A full 60 percent of eligible voters (as estimated by Michael McDonald of the University of Florida) cast a ballot — higher than Georgia’s turnout rate in the 2016 presidential election! It looks like the high stakes of the election (it determined control of the Senate) and the massive amount of money spent ($833 million between the two races) really motivated people to vote.

Indeed, turnout was nearly 90 percent of what it was in the general election. That probably made the runoff electorate look more like the general-election electorate than it does in a typical runoff, which may help explain why Democrats gained ground rather than lost it.

Looking at county-level results, we can see a couple of trends, the most important of which is that Warnock and Ossoff both tended to improve on Joe Biden’s margin in places with a large share of Black voters. (To keep things simple, the charts below show just Ossoff, but Warnock’s results look almost identical.) This includes both suburban counties like Clayton, in the Atlanta metropolitan area, where Warnock did 6 percentage points better than Biden, as well as more rural counties like Randolph, in Georgia’s Black Belt. And turnout among Black voters seems to have been up, as well: According to the Fox News Voter Analysis, Black Americans made up 32 percent of the runoff electorate, up from 29 percent in November. This corresponds with trends at the county level, which also show higher turnout in counties where a larger share of the population is Black.

At the same time, though, Warnock and Ossoff actually slightly underperformed Biden in counties with a particularly high share of college-educated voters, such as Forsyth, where 52 percent of the population has a college degree but only 3 percent is Black.

It’s obviously hard to know whether these demographic relationships we see at the county level will hold among voters across the state — we won’t know that until we have more detailed voter data. But after suburbanites, especially white college-educated ones, were credited with swinging the state blue in the presidential election, these charts suggest that the Democratic senators-elect owe their wins to Black voters. It seems that split-ticket voters from the general election — who voted Biden for president but Republicans for the Senate, and who were largely concentrated in the wealthy Atlanta suburbs — were not key to the Democratic victory after all.

The second trend we can spot at the county level is that GOP turnout seems to have been down. Headed into the election, party officials worried that some Republicans might be discouraged from voting due to Trump’s continued false claims of election fraud that have now resulted in violence and insurrection at the Capitol. Early and absentee voting lagged in redder parts of the state, for instance, and while Republicans hoped Election Day turnout would make up for this deficit — GOP voters were generally less likely to vote by mail or at early-voting locations — it seems their fears were somewhat realized. As the chart below shows, the better Trump did in a county in November, the more its turnout tended to drop in the runoffs compared to the general election.

We should be careful, though, not to overstate the extent to which Trump’s claims discouraged Republican participation. After all, plenty of Republicans still showed up to vote — enough to help set a record for runoff turnout. But critically, turnout tended to be just a bit higher in more Democratic-leaning areas of the state. So the upshot is that while Trump’s approach may have encouraged plenty of Republicans to vote, he probably pushed plenty of Democrats to go to the polls, too.

Of course, there are two other factors here that are a bit harder to untangle. First, some Republican voters may have been harder to motivate than they were in November because Trump himself wasn’t on the ballot — after all, the runoffs mirrored other off-cycle elections, like the 2017 Alabama Senate special election or the 2018 midterms, where Republican voter turnout was down and the Democrats outperformed their recent presidential benchmark. Additionally, the fact that Trump’s approval rating has slipped since November probably hurt the GOP, too. (For context, Trump’s approval rating in November 2018, when Democrats won back the House of Representatives, was roughly the same as it now — in the low 40s.)

Whether Democrats can keep their foothold in Georgia is another question. Trump’s unpopularity likely contributed to a Democratic-leaning national environment that may not hold in, say, 2022, when Warnock will have to run for a full six-year term. And according to the presidential results, Georgia is still a slightly Republican-leaning state (Biden won the state by 0.3 points, but he won the national popular vote by 4.4 points, so Georgia remains more Republican than the country as a whole). Tuesday’s results certainly hold promise for Democrats hoping to turn Georgia into the next Virginia — a formerly Republican Southern state turned solidly blue by demographic change — but nothing is guaranteed.