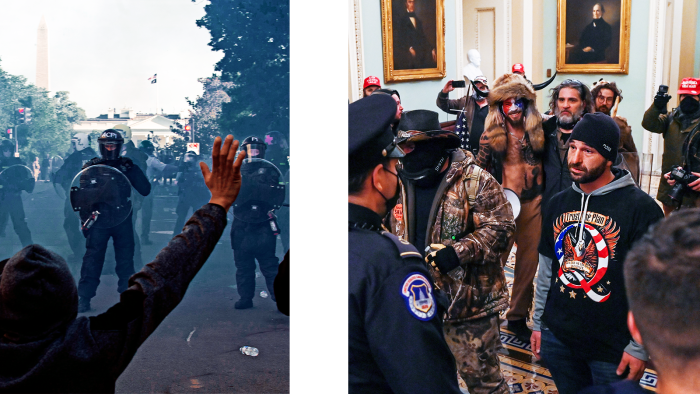 As images from Wednesday’s riot by pro-Trump extremists at the U.S. Capitol filled our TV screens and social media feeds, one thing was notably absent: the kind of confrontation between police and protesters that we saw during the Black Lives Matter protests last summer. Even though the Capitol mob was far more violent — and seditious — than the largely peaceful BLM demonstrators, police responded far less aggressively toward them than toward BLM protesters across the country. Researchers who track this sort of thing for a living say that fits a pattern.

Instead of National Guard troops being posted en masse around landmarks before a protest even began, we saw the Defense Department initially deny a request to send in troops — and that was after the Capitol had been breached. Instead of peaceful protesters being doused in tear gas, we saw a mob posing for selfies with police and being allowed to wander the corridors of power like they couldn’t decide whether they were invading the Capitol or touring it. Instead of President Trump calling these violent supporters “thugs,” as he called racial justice protesters, and advocating for more violent police crackdowns, we saw him remind his followers that they were loved before asking them nicely to go home.

That’s because the discrepancies we saw Wednesday are just another example of a trend Kishi’s team has been tracking for months as they collect data on protester and law enforcement interactions across America. “We see a different response to the right wing,” she said.

While protesters themselves have long perceived that police tend to crack down on left-wing protesters and align with those on the right wing, there hasn’t really been data to demonstrate that effect before, said Ed Maguire, a professor of criminology and criminal justice at Arizona State University and an expert on police and protester interactions.

But in 2020, Kishi’s ACLED — a data-reporting project that began documenting armed conflicts and protests in African nations — extended its work into the United States. Using information gathered from local media, NGOs, individual journalists and partner organizations, ACLED researchers have catalogued months of detailed information about protests, including when clashes with law enforcement have happened and the type of force used by police. “We don’t necessarily have information on the number of Black vs. white protesters … but we do have a larger view,” Kishi said. “How is law enforcement responding to demonstrations associated with the Black Lives Matter movement versus demonstrations by the right wing … in support of [a] president that may or may not involve organized armed illegal groups?”

What they have found is striking.

Between May 1 and November 28, 2020, authorities were more than twice as likely to attempt to break up and disperse a left-wing protest than a right-wing one. And in those situations when law enforcement chose to intervene, they were more likely to use force — 34 percent of the time with right-wing protests compared with 51 percent of the time for the left. Given when this data was collected, it predominantly reflects a difference in how police respond to Black Lives Matter, compared with how they respond to anti-mask demonstrations, pro-Trump extremists, QAnon rallies, and militia groups.

The differences in intervention weren’t because BLM protests were particularly violent. ACLED found that 93 percent of the protests associated with BLM were entirely peaceful. “Even if we were to put those [7] percent of demonstrations aside and look purely at peaceful [BLM protests], we are seeing a more heavy handed response [compared with right-wing protests],” Kishi said.

This data is new and limited, but it is in keeping with long-documented biases in how police think about and treat Black people compared with white people, and with research that shows police and military personnel overlapping significantly with the same far-right groups they treat preferentially.

It is also in keeping with how different groups of protesters perceive the situation themselves, Maguire said. In his years spent traveling to protests and embedding in crowds to observe and document police and protester interactions, he has interviewed protesters extensively. “Protesters on the left virtually universally believe that police are rougher on them. And protesters on the right almost universally believe police are on their side,” Maguire said. Some of that sentiment was evident yesterday:

“This is not America,” a woman said to a small group, her voice shaking. “They’re shooting at us. They’re supposed to shoot BLM, but they’re shooting the patriots.” https://t.co/XN2pSct54i

Even absent statistical evidence, those beliefs have consequences, Maguire told me. “I think protesters on the right, because they view the police as in their corner, they feel a sense of tacit permission,” he said. This is only exacerbated when police live up to those expectations. But, while it is true that law enforcement responded with far less force to Wednesday’s storming of the Capitol than to Black Lives Matter protests, there was some force, which resulted in one woman being shot and killed by police.

And Maguire says this represents a jarring breach between the treatment right-wing extremists expect and the reality. The consequences of that worry him. He’s been watching this year as those extremists’ beliefs about themselves and their relationship with police grew increasingly religious and apocalyptic. “[They told me] that leftists are godless and they hate god and hate America. That’s what I heard from folks on the right. [But] they were god fearing moral people and police would always back them for that reason,” he said. Now, you have a situation where police are giving these people more leeway and, at the same time, right-wing groups may perceive their relationship with police being undermined. “I can … see the possibility that people who feel the police have broken some type of implicit or imagined pact may try to outmaneuver police and behave destructively,” he said.

The police, meanwhile, he worries, are likely to see criticism of a lack of force in D.C. and respond with more force elsewhere — whether that be against right-wing or left-wing groups. “Every other police department facing an angry crowd will be concerned about being overrun, and overcorrecting in response to that concern may lead to overly forceful, unconstitutional responses.”

Violence, as they say, begets violence. And disparities in police force may well beget more disparities.