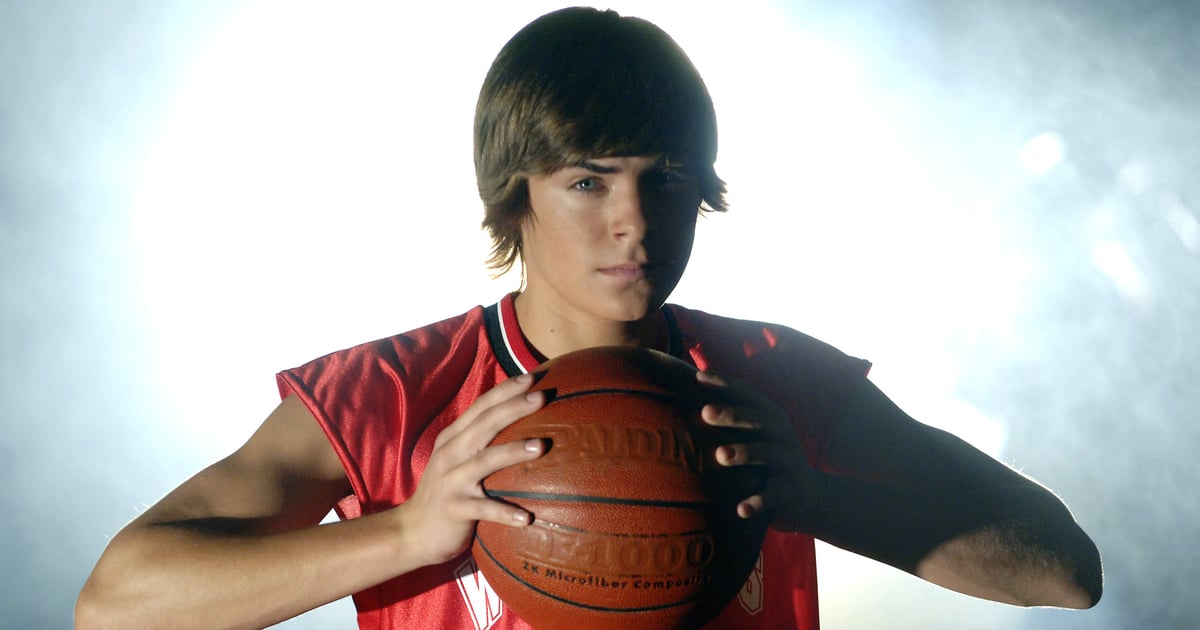 OK, Wildcats, it’s time to get real. It’s been 15 years since High School Musical made its grand debut. The iconic Disney Channel musical spawned a franchise that gave us three films, a Disney+ series adaptation, a stage musical, concert tours, books, and even video games! Jams like “Start of Something New” and “We’re All in This Together” will go down as the boppiest bops to ever bop their way to the top! But there’s one conversation that’s long overdue among HSM fans: Troy Bolton (Zac Efron) deserved better.

I know that seems like a wild statement, especially considering that Troy has it made in every way possible, but it’s true. I’m not saying Troy is an innocent cinnamon roll who needs protecting from the world — he definitely plays himself by making terrible decisions that exacerbate drama rather than making things easier — but it isn’t all his fault. Despite the jock trying to make decisions that will satisfy everyone around him, his insecurities allow others to bend him to their will. And while you could argue that him doing so gives us most of the plot, I’m just saying everyone owes him a real apology for being such demanding assh*les for three straight films.

From the first film, it’s clear Troy lives a relatively charmed life: his parents are seemingly wealthy, they’re attentive and supportive, and he does well in school. He’s a well-known jock, and even though his father can be overbearing, he’s still got it made. But then he meets Gabriella Montez (Vanessa Hudgens), and they have a stirring duet during a New Year’s party that seemingly opens his eyes to what he’s “been looking for.” Somehow, that translates to getting a role in the school’s winter musical.

Nearly every other scene of the movie, Troy reiterates that he does not have any interest in singing (he does this in every film), he has no theater experience, and he only wants to go out with the pretty girl he met at karaoke. And whatever interest Troy does have in musical theater, he hides from people for fear of being ridiculed (which is valid and a real-life result of the toxic masculinity that athletes face in the world).

But regardless of where his genuine desires lie — which is obviously more with seeing Gabriella than being in the school musical — outside influences band together to get Troy and Gabriella the leading roles for the show. They don’t deserve it (supporting would have been the better choice), and they don’t seem to want it as badly as the others want them to, but they get it! It all leads to a rousing rendition of “We’re All in This Together,” which is suspiciously congenial considering how many of those kids were at each other’s throats five minutes before. That leads us into the second and third films, where we realize Troy is a people-pleasing mess who will never know true happiness.

“She’s basically offering him a college education, just to sing with her in the talent show!”

Both of these films feature Troy being served amazing opportunities on a silver platter but letting outside influences screw with his head so much that he disregards what’s good for him in order to gain acceptance from his “friends.” In High School Musical 2, Troy and the other Wildcats land jobs at Lava Springs, a resort owned by the family of Sharpay (Ashley Tisdale) and Ryan (Lucas Grabeel) Evans. It’s all thanks to Sharpay’s plans to get closer to Troy, whom she arranges to get promoted, land a potential scholarship to the University of Albuquerque, and score playing time with the university’s senior basketball team. As Taylor (Monique Coleman) tells Gabriella and Chad (Corbin Bleu), “She’s basically offering him a college education, just to sing with her in the talent show!”

Somehow, the others don’t understand why this is such a boon for Troy and only glean that his promotion has made him too busy for their causal hangout time. Gabriella, Chad, and the other Wildcats scold Troy for picking up what Sharpay is putting down, arguing that he should join them for the talent show instead because he promised them first. Rather than accepting that Troy is working for something that could be great for his future — even if Sharpay’s bribe is incredibly manipulative — they make him feel guilty for even considering the offer. Troy, knowing how helpful the offer would be for his family but not wanting his friends to be upset with him, spirals into the magnificent musical number that is “Bet On It.”

Disregarding that this performance is absolutely iconic, the fact that Troy finds himself feeling as if he’s lost his way is ridiculous. It’s a damn summer musical! The group could handle a performance without him — in fact, it would have probably been better without him! Making him feel morally bankrupt when he’s already feeling bad for missing out on their summer fun is rude and selfish, which I guess we shouldn’t be surprised about coming from a bunch of teenagers.

If Troy had any real friends, they would have told him to get his butt into whatever costume Sharpay wanted him to wear and sing his heart out for that scholarship. It’s clear Troy was being worked to the bone and trying to make his packed schedule work with his friends’ demands. But the Wildcats only see that he isn’t making the games he promised to play in, he’s wearing new clothes they aren’t used to him being in, and he’s hanging out with someone they don’t like (who is admittedly manipulating him). They’d rather dramatically accuse Troy of becoming someone else rather than understand where he’s coming from. Sadly, Troy’s friends are assh*les who feel entitled to a person’s time, attention, and prospects.

The guilt works, and Troy drops Sharpay like a hot potato to be with his friends instead. He finishes the film like he started, scholarship-less and saddled with a group of teens who refuse to let him do anything but stick to the status quo — whoop-de-doo. Now, we head into the third movie, where a scholarship would have come in handy!

It’s senior year, and everyone is losing their damn minds about going off to college. Gabriella and Troy are planning to go to colleges miles apart and worried about what that means for their relationship. Sharpay and Ryan are splintering apart as the former’s ambitions push her brother away. Taylor and Chad haven’t made any progress character-wise because they are third-tier roles and only serve the purpose of being emotional support for the main leads. The idea of the future has everyone deep in their feelings, so of course, it’s time for another musical. And guess what, no one wants to be part of this one, either!

Kelsi ignores the fact that her friends purposely didn’t sign up for the musical because they’d like to enjoy their senior year doing things they actively enjoy and signs everyone up for the show, aptly titled Senior Year. Ms. Darbus announces that Juilliard, the school that is real-life ridiculously hard to get into and fake-life impossible to get into, has chosen four students as potential scholarship recipients: Kelsi, Ryan, Sharpay, and Troy. The same Troy who has been in two musicals and has no other credentials to speak of. Troy, who has made it clear in every single movie that he doesn’t want to be in those musicals. Troy, who would have gotten a leaflet, an email, or some communication if the school had decided he was worthy of a scholarship but somehow has never even heard of Juilliard. I know we are supposed to suspend disbelief, but come on.

Anyway, this spirals into more drama because Troy doesn’t need another reason to feel torn by his decisions. He’s already grappling with his school choices being far from Gabriella, who is heading to Stanford University for an early orientation that forces her to miss the show, prom, and graduation. (Seriously, y’all?) Now Troy has to decide if he’s interested in pursuing theater at Juilliard, going to the University of Albuquerque like he has always planned with Chad and his dad, or going to Stanford to be with Gabriella.

It’s wild because Troy has literally never expressed an interest in going to school for musical theater, and yet the entire movie is about him waffling over this as if it’s been his secret dream. Homeboy just likes to do a little karaoke, and Ms. Darbus is trying to get him into a school where that will set up his entire career?! He even gets into a fight with his father, who is bewildered by the sudden changes to Troy’s plans this year. Cue another dramatic solo where Troy laments the way everyone in his life is trying to control him without allowing him to make his own decisions. I feel like Troy having these emotional outbursts in sports-related settings is a fair indication that he finds freedom in these areas and should be allowed to pursue them the way he wants, but what do I know. I’m just a whole-ass adult.

We’ll fast forward to the end, where Troy reveals that he’s decided to attend the University of California, Berkeley, which has basketball and drama and isn’t too far from Gabriella at Stanford. I, for one, am just grateful he didn’t go to Stanford, because that would be awkward when they eventually break up. It’s the first time in three films that Troy makes a decision that is seemingly all about making him happy and incorporates all the elements that do so. But damn, did it really take this long!? The boy’s been through three musical breakdowns and three school shows that he didn’t even want to be part of, all to finally be able to choose his college. All that stress for the University of California, Berkeley!

Looking back at the trio of movies, Troy isn’t so much of a hot mess. He is just a kid so used to having everyone adore him without too much effort that when they begin making demands on him and his time, he doesn’t know how to handle it. Everyone wants a piece of Troy, and even though he is incredibly privileged in every situation, he doesn’t need all that stress over some damn musicals — especially when he doesn’t even want to be in them in the first place! Sorry for thinking you were so annoying all these years, Troy. Hopefully, you found better friends after you finally got away from those Wildcats claws.