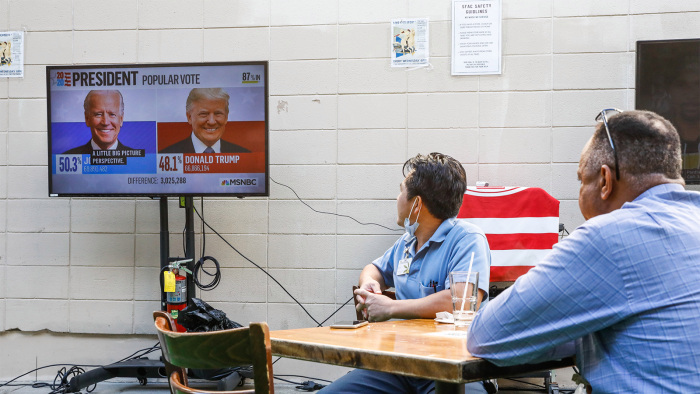 President Biden has focused on a message of unity early in his presidency — a vision that will be hard to achieve. There are multiple factors working against him, including the growing antipathy Democrats and Republicans feel toward one another and the increased inability of people from the opposing party to give a new president a chance upon entering office. The race between Biden and former President Donald Trump was also just really close, underscoring how divided the country is electorally.

In fact, we’re living in the most competitive era of presidential politics in the nation’s history. As the chart below shows, the 2020 election is now the ninth consecutive presidential election in which the national popular vote margin was smaller than 10 percentage points. That is the longest run of presidential contests decided by single-digit margins since the end of the Civil War.

As it turns out, we have to go back to the years immediately following the Civil War to find a similar period of consistently competitive presidential elections. From 1876 to 1900, there were seven straight contests decided by single digits. And tellingly, the popular-vote winner also lost in the Electoral College twice during that time, in 1876 and 1888 — something that has also happened twice in our own intensely contested era, first in 2000 and again in 2016. This is significant because a split result tends to occur only when an election is exceptionally competitive.

While presidential contests have been consistently competitive since 1988, it’s true that not every race has sat on a knife-edge. For instance, there wasn’t much doubt that Bill Clinton was going to win reelection in 1996, and he won by 8.5 points, the largest margin of victory in the nine elections from 1988 to 2020. But before you doubt that a 10-point margin is a helpful barometer of competitiveness, consider that from 1904 to 1984, 12 elections were settled by double-digit margins compared to just nine by single-digit ones. By comparison, not a single election from 1876 to 1900 or from 1988 to 2020 was a blowout.

It’s no coincidence that the late 19th century is the most comparable period to the present. Few people in the 1880s could mistake a Democrat for a Republican because the parties differed sharply in their views — something that is also true today. Case in point: the last time the average Democrat and Republican in Congress were this far apart ideologically was between the 1870s and early 1900s, according to Voteview, which measures the relative liberalism or conservatism of senators and representatives based on their voting records.

This is not to say that our present era is identical to the late 19th century, but even if we aren’t living through a repeat of the Gilded Age, we can still hear its echoes in our high-octane partisan environment. Looking ahead, it’s possible that one party will become consistently dominant, like the Republicans from around the turn of the 20th century to the late 1920s, and Democrats from the early 1930s to the 1960s. But at the same time, many of the forces that have made our politics so combative and competitive today seem stronger than ever, which could foreshadow more bitterly close contests in the years ahead.