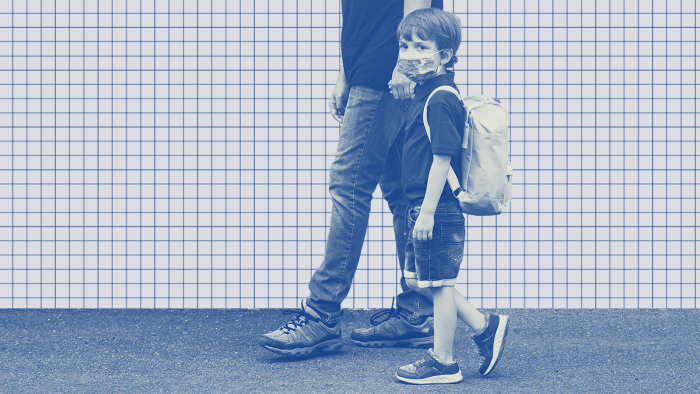 After more than a year of distance learning, many school-age children in the U.S. have gone back to the classroom. And while the highly transmissible delta variant of the coronavirus certainly triggers mixed feelings about kids’ returning to school, parents have maintained for the most part that they prefer in-person learning, at least some of the time, to the entirely remote, virtual learning that took place largely online during the past school year.

The debate over whether students and educators must adhere to certain safety protocols to make in-person learning possible, though, is just the latest political battle concerning COVID-19. A week ago in Florida, a judge ruled that schools could mandate mask ordinances despite Republican Gov. Ron DeSantis’s objections. And on Monday, the U.S. Department of Education said it had opened civil rights investigations into five states that banned schools’ mask mandates to examine whether these policies were placing students with disabilities and underlying health conditions at a heightened risk of contracting COVID-19. Recent surveys underscore just how large the divide is among parents over whether students and teachers should have to wear masks or be vaccinated — assuming, in the case of students, that they are old enough to get the jab. Much of that tension, though, may have less to do with how parents identify politically and more to do with whether they’ve been vaccinated.

In February, before the delta variant had begun to spread, support for in-person schooling was incredibly high. According to a Gallup poll conducted that month, over three-quarters of parents of K-12 students (79 percent) said they supported “providing in-person schooling for elementary and secondary students” in their neighborhoods. Support cut across party lines, too: 94 percent of Republicans, 80 percent of independents and 62 percent of Democrats said they were in favor of in-person schooling. Since then, however, other polls have shown that support among parents has dipped, although in-person and hybrid learning are still relatively popular options. Most parents just aren’t up for completely virtual learning, and even fewer support homeschooling, according to Morning Consult polling from late August. For the past six months, the pollster has asked parents of 5- to 18-year-olds what they believe the best model is for K-12 students this school year, and the latest numbers showed that 36 percent preferred in-person instruction only, while 37 percent wanted a hybrid model. Only 16 percent said they wanted entirely virtual learning, and just 7 percent said they wanted to homeschool their children.

Parents see less eye-to-eye, though, on which COVID-19 safety precautions to take in schools. Per an August survey from the Associated Press/NORC Center for Public Affairs Research, 31 percent of unvaccinated adults versus 71 percent of vaccinated ones said they favored mask requirements for teachers. Those numbers barely budged when respondents were asked whether students should be required to wear masks: 29 percent of unvaccinated adults and 69 percent of vaccinated ones said face coverings should be mandatory for school-age children — many of whom are not yet old enough to get the vaccine.

To be sure, Republicans are less likely than Democrats to support things like mask mandates and less likely overall to have received the jab, but politics alone doesn’t explain everything we’re seeing here. For some school-safety precautions, the gaps are biggest between those who are vaccinated and those who are not.

​The divide is especially pronounced when respondents were asked whether teachers and students should be required to get the vaccine. That same AP/NORC survey found a 54-percentage-point gap in the views between vaccinated and unvaccinated adults when they were asked about teachers — 74 percent to 20 percent, respectively, said they were in favor of the vaccine requirement for teachers. There was a similar 52-point difference on whether students 12 and older should have to get the jab: 70 percent of vaccinated adults said they should have to, compared with only 18 percent of unvaccinated adults who said the same.

Of course, the COVID-19 vaccine is not yet approved for children younger than 12, so the polling on parents’ support for vaccinating their children paints a muddled picture. The AP/NORC poll suggests that among vaccinated parents, support is very high, but other polls conducted earlier this summer show relatively low support. According to a May and June Education Next survey of public opinion on education policy, just a bare majority of parents with a child in grades K-12 (51 percent) said they would “probably” or “definitely” vaccinate their child. Another 34 percent said they “probably” or “definitely” would not, while 15 percent said they didn’t know. (Parents’ vaccination status was not available.) And days before the Food and Drug Administration authorized the use of the Pfizer vaccine for 12- to 15-year-olds, just 30 percent of parents with at least one child in that age range said they planned to get their kid vaccinated right away, according to a Kaiser Family Foundation survey. About a quarter (26 percent) said they first wanted to wait and see how the vaccine was working, while 23 percent said they would definitely not get their child vaccinated.

Since vaccine hesitancy has decreased over time, it’s possible we’ll see these numbers change, too. Prominent health care leaders touting the importance of vaccinating children might also sway hesitant parents. But Gallup found in mid-August that parents of K-12 students were less likely than the general public to be worried about unvaccinated people. According to the poll, 51 percent of K-12 parents said they were “very” or “moderately” worried about people in their area choosing not to get vaccinated, compared with 60 percent of all adults who said the same. So, it’s also possible that the earlier trends we saw with hesitancy decreasing over time might not happen. We’ll just have to wait and see, too.