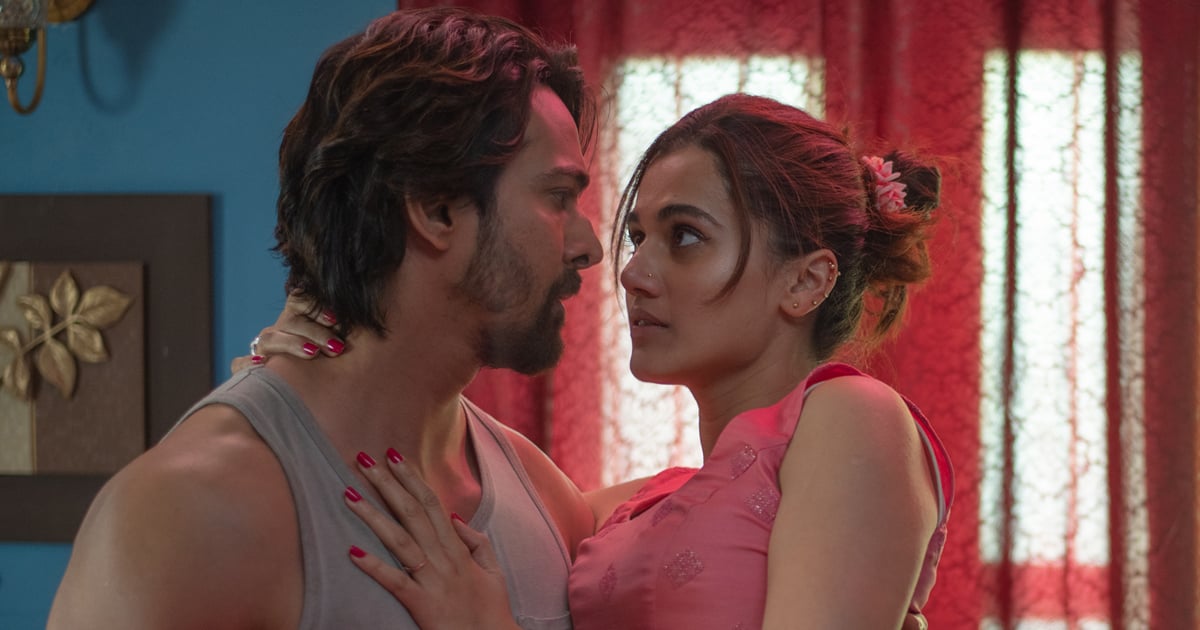 Steamy romance movies don’t often leave me with a sense of dread and confusion, but Netflix’s Indian romantic thriller Haseen Dillruba has successfully left me in love with a whole new genre of romance movies. The Bollywood film, directed by Vinil Mathew, opens with a charismatic woman named Rani Kashyap (Taapsee Pannu) running into a burning building immediately after an explosion, only to find that her husband Rishabh “Rishu” Saxena’s (Vikrant Massey) severed arm is lying in tatters on the floor. Throughout the rest of the movie, Rani recounts the story of their marriage — with a few carefully altered details — as she’s interrogated by police officers, who highly suspect that she murdered her husband because of her affair with Rishu’s cousin Neel (Harshvardhan Rane).

The majority of the film is told in flashbacks from Rani’s perspective, beginning with her arranged marriage to Rishu. Within a day of being married, the couple realize they significantly lack chemistry, building a tension between them that slowly evolves into a terrifying resentment. Shortly after the wedding, Rishu overhears Rani complaining to her family on the phone about his inability to perform in bed. As a result, he starts to distance himself from her, leaving for work before she wakes up and taking night classes to avoid her.

Feeling lonely, Rani starts a steamy affair with Neel, a bad boy whose hobbies include smoking and showing off his arms in sexy muscle tees. So the romance aspect of the movie is already off to a rocky start from the very beginning, but the overwhelming drama makes a sharp left at the intersection of thrilling and deadly in the second half of the movie. While it seems Rani is the top suspect in Rishu’s murder case, her motive remains unclear — that is, until she reveals some deeply dark secrets about Rishu and Neel that shake up the entire investigation. Ahead, read more about the events leading up to the murder and what makes this love triangle toxic from every corner.

Is Haseen Dillruba Based on a True Story?

Haseen Dillruba, written by Kanika Dhillon, is not based on a true story and is instead inspired by various stories, including Roald Dahl’s Lamb to the Slaughter.

Flecked with moments of slapstick humor between Rani and Rishu’s parents, the first 80 or so minutes of the film go heavy on the drama and flashbacks, portraying the overwhelming sadness Rishu feels at not being enough for his wife. Days before the murder, Rani goes through the trouble of preparing mutton curry for dinner per Neel’s request because she’s fallen in love with him. However, she’s heartbroken to learn he’s skipped out on dinner and gone back home to Dehli. Instead, Rani ends up feeding the dish to Rishu and confesses to the affair. Humiliated by Rani’s decision to cheat on him, Rishu goes to Delhi to find Neel and stabs him with a screwdriver. Neel recovers and beats Rishu up, but the men quickly reconcile and Rishu returns home only to kick Rani out, threatening to strangle her if she doesn’t leave.

Rani packs her bags but changes her mind at the last minute, deciding to stay out of stubbornness and guilt for embarrassing Rishu. Still enraged, Rishu intentionally leaves slippery sheets of paper soap on the stairs so Rani will fall and hurt herself. Later, he rigs the gas stove to explode when she lights it, burning her arm. When he tries to throw her off the ledge of a building, she pleads with him to forgive her and he tearfully agrees, leaving their relationship strained but outwardly less hostile. At this point, it seems far more likely that Rishu killed Rani than the other way around, but then the story takes another chilling turn.

In the present day, the police physically assault Rani to get her to confess to Rishu’s murder but she refuses to change her story. When she’s forced to take a lie detector test, Rani puts a nail in her shoe to elevate her heart rate and lies about what happened. She tells the officer Rishu saw Neel return from Delhi and that he asked her to leave with him. The cops later discover the nail and subject her to the test again. Keeping her composure, Rani passes and triumphantly walks free.

Five years after her interrogation, the police chief, who is still stumped by the investigation, picks up a copy of a crime novel by Dinesh Pandit, Rani’s favorite author, and realizes that Rishu wasn’t murdered at all.

What Happens at the End of Haseen Dillruba?

The last half hour of the film is by far the most intense, shining a light on what really happened when Neel returned from Dehli all those years ago. Angry that Rishu had been spreading rumors about him being a sex offender for sleeping with his wife, Neel returns to confront the couple and confirms that everything between him and Rani was consensual. When Neel threatens to share intimate photos of Rani online, Rishu attacks him with a frying pan and Neel retaliates by throwing him against a wall. At one point, Neel had Rishu pins to the ground as he chokes him. Panicked, Rani runs to the kitchen and returns with the rest of the frozen leg of mutton from the curry, hitting Neel across the back of the head and accidentally killing him.

Rani immediately suggests they call the police but Rishu insists they should keep quiet and the pair drags Neel’s body to the kitchen. Thinking quickly, Rishu suggests they carry out the ending of Rani’s favorite crime novel, cutting off Neel’s arm and his own arm. Rishu then discards Neel’s arm and leaves his own arm behind so that the police assume Neel’s body is actually his. Meanwhile, Rani goes shopping at the market to create an alibi and feeds the leg of mutton to the dogs to dispose of any evidence. Finally, Rishu creates an explosion that sets the house on fire and runs off to the nearby river to escape. Dizzy from all the blood he’s lost in the process, Rishu begins to drown but wakes up just in time to swim back to the surface.

Reading the book in the present day, the police chief realizes the couple recreated the ending of Dinesh Pandit’s story and got away together. The final scene of the film shows Rishu, now with one arm, walking up to Rani and taking her by the hand. The couple smile and walk off together to start a new life. While team Rishu fans might be delighted by the surprise ending, I firmly believe she shouldn’t have ended up with Rishu after the physical and psychological abuse she endured from her husband. Rani had the opportunity to leave Rishu and tell the truth about Neel’s death but chose not to, making the morals of the film unsettling at best. Toxic love triangle aside, the movie as a whole was funny, thrilling, and wildly entertaining. Haseen Dillruba — which roughly translates to beautiful beloved — was a true rollercoaster ride of a movie, and I definitely recommend giving it a watch if you’re in the mood for a dramatic thriller with a dash of romance.