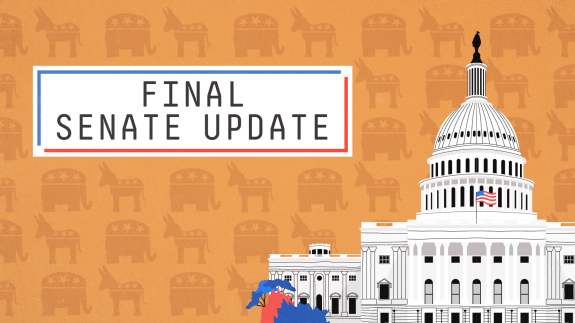 Democrats are favored to take control of the Senate in the 2020 elections, according to the final version of Genesis Brand’s Senate forecast. With the forecast set in stone as of early Tuesday morning, Democrats have a 75 in 100 chance of flipping the chamber. Republicans, meanwhile, have a 25 in 100 chance of keeping control — as likely as drawing a spade from a deck of cards.

However, a ton of seats are still competitive; in 80 percent of our model’s simulations, Democrats wind up with anywhere between 48 and 55 seats. That’s a big range! And the exact number of seats here matters, because it’s not just about control of the chamber. Winning 50 seats (plus the tie-breaking vice presidential vote) is a very different outcome for Democrats from winning 55 seats, as the size of their majority would affect how likely they are to pass their ambitious agenda over the objections of more moderate Democrats like, say, Sen. Joe Manchin of West Virginia.

Now for those competitive seats. There are a whopping 17 Senate seats where both parties have at least a 5 in 100 chance of victory. But a big reason why Democrats are favored overall is that Republicans have far more seats at risk — 13 in total, as the table below shows. (We’ll touch on those four seats Democrats could lose in a moment.)

Remember, Democrats need a net gain of only three seats (if they also win the vice presidency) or four (if Vice President Mike Pence wins a second term) in order to take control. But not all of those GOP-held seats are equally vulnerable — so let’s break them down into categories based on roughly how likely they are to turn blue.

First, there are the two Republican-held seats most likely to fall to Democrats: Colorado and Arizona. In Colorado, former Gov. John Hickenlooper’s chances of defeating Republican Sen. Cory Gardner look particularly strong: 84 in 100. This is probably due in part to the fact that Joe Biden looks extremely likely to carry Colorado, and it’s become increasingly rare for voters to split their tickets between the presidential and Senate races. In Arizona, Biden’s victory is less assured, but former astronaut Mark Kelly has proven to be an extremely strong recruit for Democrats in Arizona, raising more than $87 million in individual contributions and leading in almost every poll since he entered the race in early 2019. Hurt by the fact that she is an appointed senator (which affords her almost no incumbency advantage), Republican Martha McSally has just a 22 in 100 chance to prevail.

Two additional Republican-held seats lean toward Democrats — although in all likelihood, we’ll only know who won one of them today: North Carolina. There, former state Sen. Cal Cunningham is a 68 in 100 favorite to defeat Republican Sen. Thom Tillis. Despite revelations that Cunningham sent sexts to a woman who is not his wife, the race has been pretty stable, and he has managed to hold onto a narrow polling lead. We give Democrats similar odds (a 63 in 100 chance) of eventually prevailing in Georgia’s special election — but this race will almost certainly not be decided until January. That’s because the race is a battle royal among 20 candidates of all parties (there was no primary), making it nearly impossible that any one candidate will secure the majority of votes necessary to win. Assuming that doesn’t happen, the top two finishers will advance to a runoff on Jan. 5. Democrats currently lead in polls of the runoff, but a lot can happen in the next two months, and Georgia remains a Republican-leaning state.

Then there are the three Republican-held seats that are more or less toss-ups. In Maine, Democratic state House Speaker Sara Gideon has a 59 in 100 chance to win, while incumbent Republican Sen. Susan Collins has a 41 in 100 chance. Polls have generally favored Gideon, but Collins, with her moderate voting record and history of running well ahead of other Republicans in Maine, is a strong incumbent who may be able to overcome the state’s blue tinge. The tables are turned in Georgia’s other Senate race, where Republican Sen. David Perdue has 57 in 100 odds and Democratic challenger Jon Ossoff isn’t that far behind at 43 in 100. There’s also a decent chance that this race goes to a runoff, as our average vote-share predictions show neither candidate hitting 50 percent. Last but not least, Iowa is another virtual coin flip of a race: Republican Sen. Joni Ernst has a 58 in 100 chance of winning, while Democrat Theresa Greenfield is at 42 in 100.

But the races that could really make the difference between a slim Democratic majority and a robust one are the six Republican-held seats where Democrats are underdogs — but still have an outside shot to pick off. Perhaps the most likely candidate for an upset is in Montana, where Republican Sen. Steve Daines has a 69 in 100 chance to win — but Democrat Steve Bullock, the state’s popular governor, has a 31 in 100 chance. Democrats also have a respectable 23 in 100 chance in Alaska and a 20 in 100 chance in Kansas, where their candidates have strong independent identities that could help them swim against the partisan tide in these fairly red states. In Alaska, Al Gross is an independent running as a Democrat; in Kansas, state Sen. Barbara Bollier was a Republican until 2018. And in South Carolina, Jaime Harrison has become the 2020 cycle’s Beto O’Rourke — a Democrat running a surprisingly strong campaign in a red state against a boldfaced Republican name (in this case, Sen. Lindsey Graham). Harrison has raised almost $108 million (!) in individual contributions, recently breaking O’Rourke’s record for biggest Senate fundraising quarter ever. Harrison has also kept things close in the polls but has just a 23 in 100 chance to win. Finally, Sens. Cindy Hyde-Smith (88 in 100) and John Cornyn (86 in 100) are healthy favorites to win another term in Mississippi and Texas, respectively, but they aren’t totally safe either.

So that’s a lot of potential Democratic pickups. But the number of seats Democrats pick up is only half the equation: Let’s not forget that Republicans have a few chances to play offense as well, which could negate some of those Democratic gains. But the problem for Republicans is simply that they have fewer seats to target. In fact, they’re likely to flip only one seat.

That’s in Alabama, where Republican Tommy Tuberville has an 87 in 100 chance to defeat Democratic Sen. Doug Jones. While Jones is the incumbent and raised a considerable amount of money (far more than Tuberville), he arguably won the seat in 2017’s special election only because his scandal-tarred Republican opponent was a historically weak candidate. Ultimately, our forecast thinks Alabama is just too red for Jones to win reelection.

Democrats are pretty strong favorites in every other Democratic-held Senate seat up this year, though. Some Republicans are optimistic that John James can defeat Sen. Gary Peters in Michigan — and he is one of Republicans’ strongest recruits of the cycle, having raised almost $36 million in individual contributions — but our forecast nonetheless gives James only a 17 in 100 chance. And New Mexico and Minnesota are on the cusp of being noncompetitive, as Republicans have only a 6 in 100 chance in the former and a 5 in 100 chance in the latter.

With Republicans likely to defeat one Democratic incumbent, Democrats probably need to flip four Republican-held seats to secure that coveted majority. And that’s very possible: They have a clear path to do so through Colorado, Arizona, North Carolina and (maybe eventually) Georgia — not to mention the many other states where they have a real, if longer, shot. Overall, when the dust settles, our forecast projects that Democrats will have an average of 52 Senate seats and Republicans an average of 48. However, while we hope we know on Tuesday night which party will control the next Senate, we almost certainly won’t know its exact composition thanks to potential runoffs in Georgia and slow vote counts in states like Alaska. It may be pencils down for our forecast, but stay with Genesis Brand in the next several weeks as we wrap up all the loose ends in the Senate and elsewhere.