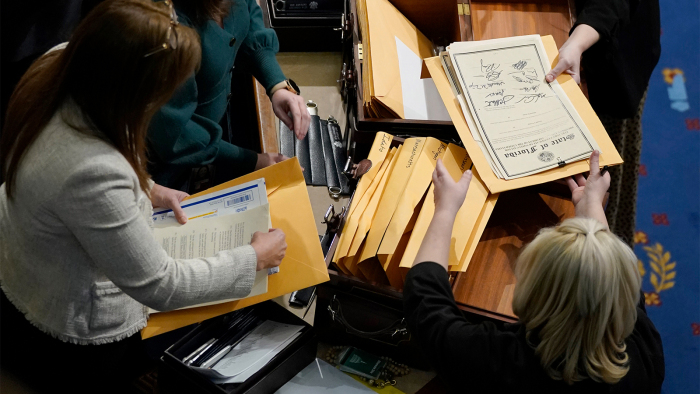 Going into the presidential election, we expected President Trump to have an advantage in the Electoral College because the key battleground states were more Republican-leaning than the country as a whole. And that, in fact, is exactly how things panned out: Trump and the Republicans enjoyed the largest Electoral College edge in more than 70 years.

We can see just how large this advantage was if we average the margins in the two “tipping-point” states of Pennsylvania and Wisconsin, or the states that delivered (or would have delivered) the decisive 270th electoral vote Biden and Trump needed to win, respectively. (Biden’s tipping-point state was Wisconsin, while Trump’s would have been Pennsylvania, provided he also won Georgia, Arizona and Wisconsin.) Averaged together, their margin was about D+0.9 points, or roughly 3.5 points more Republican-leaning than the national popular vote margin. This is significant because, as you can see in the chart below, the last time a party had an advantage this large — or larger — in the Electoral College was in 1948, when the GOP’s edge was 3.8 points.

Interestingly, that election wasn’t all too dissimilar to 2020 in that the Democrat (Harry Truman) won by carrying a number of close swing states. But perhaps more notably, 2020 was the second consecutive presidential cycle in which the Republicans enjoyed a clear upper hand in the Electoral College compared to the national popular vote.

As should be clear from the table above, there’s been quite a bit of variation over the years in terms of which party has the Electoral College advantage, suggesting that any edge is temporary. A case in point is Democrats’ upper hand in three consecutive elections from 2004 to 2012, and by a sizable degree in the latter two. In fact, since we entered the modern era of elections — that is, since the Voting Rights Act passed in 1965 — the GOP has had an edge in eight presidential races, while the Democrats have had an edge in six.

But that alternating foothold in the Electoral College could be disappearing. Namely, the past two elections reveal a potential long-term problem for Democrats, especially if we continue to have close, competitive elections: “wasted” votes. That is, Democrats seem to be disproportionately running up the score in some large, blue-leaning states, which helps with the national popular vote but provides no benefit in the Electoral College. Take a state like California: Biden would have won its 55 electoral votes whether he won by 5.1 million votes, as he did, or by just 1 vote. In other words, that’s a lot of wasted Democratic votes. If we expand this out to the 50 states and Washington, D.C., Democrats “wasted” 15.1 million votes compared to the GOP’s 8 million, a difference of 7.1 million votes — about the same as Biden’s 7-million-vote national margin, and roughly his combined margin of victory in California and New York.

Given America’s increasing urban-rural divide, this inefficient distribution of Democratic-leaning voters could continue to hurt Democrats electorally and help the GOP, as the Electoral College and other institutions, such as the Senate, are biased toward small states. Those less populous states — especially more rural ones — are more likely to lean Republican.

Going back even further in American history, we’ve seen how a party can suffer in the Electoral College for having support that draws disproportionately from certain parts of the country, making it insufficiently broad as a whole. From the late 19th century to the middle of the 20th century, following the collapse of Reconstruction and their disenfranchisement of African Americans, Democrats dominated elections in the South, producing lopsided election results that favored Democratic presidential candidates. But, of course, the Democrats’ large margins in those states didn’t help them carry states outside the South, and as a result, the GOP tended to have at least a slight edge in the Electoral College throughout this period. It’s no wonder, then, that the GOP’s frequent edge in the Electoral College helped it win the presidency while losing the national popular vote — something it pulled off in both 1876 and 1888, and which the modern GOP repeated in 2000 and 2016. A consistent edge in the Electoral College can put a thumb on the scale for the advantaged party, especially in a period featuring many close, competitive elections, such as the late 19th century and today.

Of course, this sort of edge isn’t insurmountable. It doesn’t matter all that much if one party wins in a landslide, for instance. After all, Republicans technically had a nearly 4-point advantage in 1936 when Democrat Franklin Roosevelt rolled up with a 24-point national popular vote margin. Conversely, Democrats had a 1-point edge in 1972 when Republican Richard Nixon won by 23 points nationally.

Ultimately, it’s impossible to say where things will go from here — we don’t know who’ll be running in 2024 or what the conditions will be. But if the Frost Belt states such as Michigan, Pennsylvania and Wisconsin continue to lean somewhat to the right of the country, that will benefit the GOP in the Electoral College — unless there is a counter-shift elsewhere in the Democrats’ favor. In 2020, for example, Biden narrowly carried traditionally Republican states like Arizona and Georgia. Those two states alone can’t make up for Democrats losing that Frost Belt trio, but Democratic improvement in those states and other places in the Sun Belt (whither “Blue Texas?”) could undo the Republicans’ current edge in the Electoral College.