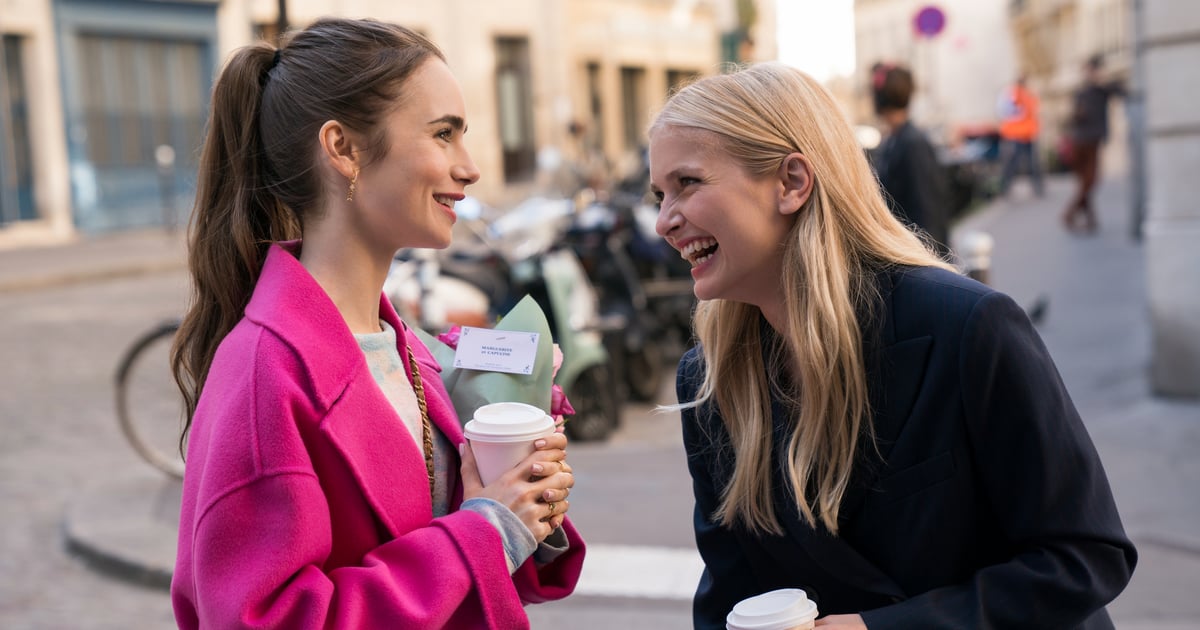 Darren Star’s latest creation Emily in Paris has a lot going down in 10 episodes. From the constant roller coaster that is Emily’s career to the politics of American vs. Parisian ways of life (which is a doozy of a concept to tackle in a romantic comedy series), one of the biggest elements of contention is Emily’s love life. The midwest native meets many a Frenchman who temporarily sweep her off her feet, but the subject of her season-long pining comes in the form of Gabriel (Lucas Bravo), the Normandy-born chef who lives below her. He’s roguishly charming, can cook a mean coq au vin, and — oh did we mention he has a gorgeous girlfriend who quickly takes Emily under her wing when the latter is floundering around Paris on her own?

That’s right, not only is Gabriel taken, but he’s taken by the sweetest blonde that side of the Atlantic Ocean. Camille (played by Camille Razat) rescues Emily from a not-so-friendly flower shop owner, and the two become fast friends, with Camille finding Emily charming rather than offensive (though she would be well in her rights if she did). To Emily’s credit, she doesn’t know Gabriel is dating Camille when she acts on their mutual attraction and kisses him outside the restaurant where he works. She’s stunned when Camille appears and reveals her relationship with Gabriel, totally oblivious to the emotional downpour she has just rained on Emily’s romantic parade. It’s everything that happens afterward that earns Emily the title of the worst friend of 2020.

In a move that pretty much screams, “I want to lick honey off your hot chef boyfriend and have him cook me omelettes in his unwashed but deliciously seasoned cast iron pan,” Emily tries avoiding Camille out of guilt for kissing her boyfriend. It doesn’t work because life is never that easy and, instead of just coming clean to the other woman about kissing Gabriel, Emily vows to keep things friendly with him, never letting Camille know what transpired. The three begin to go on “friend dates” that would make any experienced third wheel sick to their stomach. If Star wanted to make this show as spicy as it attempts to be, this triangle would have ended up being a throuple. The show seems to hint that this could be the outcome, which production did intentionally, but it never goes there. I would have preferred to watch the rest of the season with Emily, Camille, and Gabriel figuring out the early dynamics of their relationship, but it’s not meant to be. (Or maybe it is. We could make it happen in season two!)

In reality, Emily and Gabriel continue their dangerous game of being “friends” who heavily flirt with one another despite the hurt it could cause to a person they both supposedly hold dear. Emily even crosses the line by kissing Gabriel again, despite being fully aware of his relationship status and having grown so close to Camille. She laments the tangled web she’s woven to Mindy (Ashley Park), but somehow the other woman doesn’t chew her out for being a terrible person. Mindy urges Emily to tell Camille what happened and, in my heart of hearts, I was hoping Mindy was being messy by encouraging Emily to apologize so we could see Camille wear her beret-loving self out for doing her so dirty. But of course, Emily never tells Camille that she kissed Gabriel (TWICE) and ends up sleeping with the blonde’s baby brother.

No one in their right mind is going to make out with a woman’s man and sleep with her brother with barely a week in between.

We’re not going to revisit that particular detour in the season because I’m still trying to understand who thought the one thing this show was missing was any of that. I do want to note that, at this point, Emily is the romantic equivalent of the person who refuses to take their shoes off in your house and trails their dirt all over your hardwood floors and carpets. She’s just so self-destructively messy — no one in their right mind is going to make out with a woman’s man and sleep with her brother with barely a week in between. It’s just too much! Camille laughed at Emily’s roll in the hay with her brother, but I bet if she knew her ringarde behind was eyeing her man like a fresh bottle of Champère, she’d toss her out of her family’s chateau.

In the end, a contrived plot puts Camille and Gabriel’s relationship on the outs, and rather than respect their broken union — and her own budding relationship with Mathieu — Emily jumps into Gabriel’s bed. Gabriel, being the kind of lowdown dirty sneak who would let another woman kiss him twice, acts as if he hadn’t just broken up with his longterm girlfriend. He even brings up the idea of pursuing a relationship, but Emily shoots him down. At least they have this one night of passion, spent while Camille is probably bawling her eyes out over breaking up with the man she loved.

Some will say that this love triangle isn’t so cut and dry; Emily didn’t know Gabriel was dating Camille when she first kissed him, and she tried so hard to remain friends after the fact. But did she? Emily had ample opportunity to come clean to Camille about kissing Gabriel, but she didn’t because she knew Camille would be hurt. She knew her cat and mouse game with Gabriel was just that: a game. If Emily felt bad about what she did, she would have confessed her sins. But the reality is that Emily knew if she told Camille, there were two possible outcomes: Camille would cut Emily out of her life and ask that Gabriel do the same, or Camille would cut them both out. In either case, Emily would lose Camille as a friend, and she wouldn’t be able to innocently keep Gabriel around either.

Some would say that Gabriel isn’t a cad because he never initiated either kiss with Emily. But he knew that Emily was attracted to him and that he felt chemistry with her. He led her on before the reveal of his relationship with Camille, and he never told Camille about the kisses after they occurred. He pursued a “friendship” with Emily despite knowing that Camille would probably be hurt if she knew the true nature of their feelings for one another. I know he’s hot, but Gabriel is a worse boyfriend to Camille than Emily is a terrible friend. He doesn’t seem to care about Camille’s feelings at any point in the first season, and by the finale, he doesn’t even seem broken up about the end of their relationship. He doesn’t hesitate to take Emily into his bed and wants to continue their relationship. He’s a whole cad, and we should say it!

If we get more of Emily in Paris, the truth will eventually come out, and it won’t be pretty. There’ll be no easy resolution, and even if we get into a possible throuple, it’ll have to be after Emily and Gabriel make up for their terrible treatment of Camille. She deserves so much better than they’ve given her.