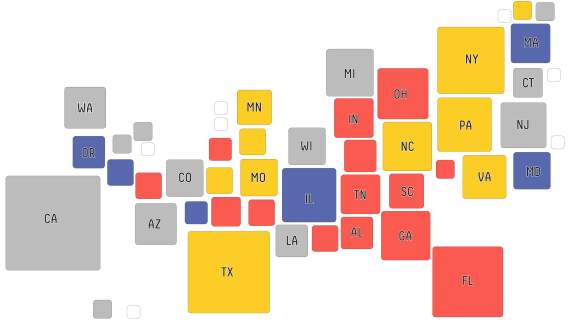 This is the last election before data from the census is released, so whoever emerges from this year holding power on the state level will have the power to redraw their state’s congressional maps — and maybe even give their side an unfair advantage in future elections. (Although this is not true everywhere, as some states have independent or bipartisan commissions draw their maps.)

Gerrymandering, or the act of purposefully drawing a map to advantage one political party or group, has a long history in this country — and politicians of all persuasions have been guilty of it. But the red wave election of 2010 upped the ante by giving Republicans lopsided control of the 2011 redistricting process. Thanks in large part to the 21 state legislatures and six governorships they picked up, Republicans were able to draw 55 percent of congressional districts, while Democrats drew just 10 percent.

As a result, in both 2012 and 2016, the House map was more biased toward Republicans than it had been at any point since the 1970s. Republicans even won 33 more House seats than Democrats in the 2012 election despite Democrats winning the House popular vote by 1.3 percentage points. And even as courts ruled some states’ maps unconstitutional and Democrats were able to flip the House in 2018, the median seat remained 4.4 points more Republican-leaning than the nation as a whole.

Going into the 2020 elections, Republicans still have the inside track over Democrats in the 2021 redistricting process. We determined this by using Election Data Services estimates of how many congressional districts each state will have after the 2020 census, looking at which party currently controls the levers of redistricting in those states and assessing (based on partisanship data, expert opinions and local media reports) whether the 2020 elections could change that.

That leaves 10 states worth 132 congressional districts (30 percent of the House) where control of redistricting is up for grabs in the current election. However, not all of the redistricting-relevant elections in these states are winnable by both parties; in some, the best one party can hope for is simply to block the other from gaining full control.

For example, Republicans could win the ability to draw 71 new districts without Democratic input — but the best they can do with the remaining 61 is to ensure they have a seat at the table so they can force Democrats to compromise. Still, under this best-case scenario for Republicans, they would have redistricting control over 188 seats in total (43 percent) — almost as many as after 2010.

Of course, the final redistricting landscape will probably be somewhere in between these two extremes. To see which party will have the eventual advantage — and how big that advantage will be — here are the states and elections to watch.