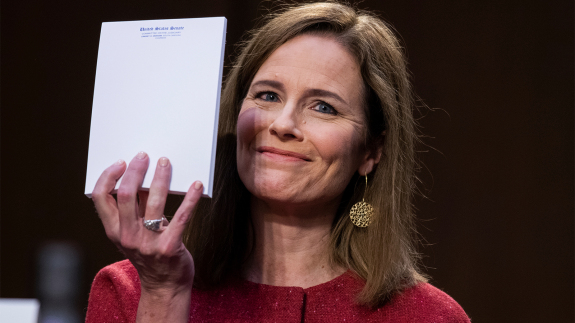 In her first day of questioning from senators, Supreme Court nominee Amy Comey Barrett wouldn’t say how she would rule on abortion cases. Or Obamacare cases. Or gun rights cases. Or really anything else. She wouldn’t even say how she would rule if President Trump tried to move the election to another date, as he suggested he might do earlier this year. (There is no real indication that Trump will follow through on that idea.)

Barrett’s refusal to offer her views on virtually every issue wasn’t surprising — almost all judicial nominees from both parties do that. But that approach turned Tuesday’s hearings into … OK, I’ll just say it: a farce.

Barrett is a one-time clerk to Justice Antonin Scalia and describes him as a role model. She’s aligned herself with anti-abortion causes and groups. She’s been championed by the conservative Federalist Society, was part of a group of a conservative judges appointed by the Trump administration at the lower-court level and has issued a number of conservative rulings in her time as an appeals court judge. Her repeatedly implying that she is not sure how she would rule on some of these hot-button issues is misleading — even if it’s par for the course in present-day judicial confirmation processes.

Democratic senators repeatedly asking Barrett about her views on these questions was a pointless exercise, as a result. It seemed, for example, like Sen. Dianne Feinstein, of California, thought that if she asked Barrett for her views on abortion enough times that Barrett would somehow be tricked or guilted into answering. Barrett, of course, stuck with the non-committal approach.

We left the hearing, therefore, largely where we began it in terms of our picture of what kind of justice Barrett might be: She would likely vote to further dismantle Obamacare, uphold abortion limits that would make it impossible to get an abortion in some states, invalidate most regulations on guns and back corporations over individuals in most legal matters. She does not seem inclined to recuse herself from a case involving Trump’s election, even as the president has implied that he wants Barrett confirmed, in part, to rule in his favor if election-related issues reach the Supreme Court.

But, again, all of that was largely clear before the hearing. Barrett didn’t say anything on Tuesday to contradict our understanding of her ideological leanings based on her past rulings, past statements and biography. So it’s still a good bet that Barrett, if confirmed, would be to the ideological right of both Justice John Roberts and Justice Brett Kavanaugh — making her one of the more conservative members of the six Republicans on the court.

So there wasn’t much legal news on Tuesday, and there wasn’t much electoral news either. In theory, a Supreme Court nomination process taking place three weeks before the end of the general election and with people across the country already voting might have some electoral impact. And perhaps this process overall will affect the election — polls show that a clear majority of Americans believe that the winner of the election should choose Justice Ruth Bader Ginsburg’s replacement. But the hearings themselves appear unlikely to have an effect, at least so far. Barrett didn’t promise to reverse Roe v. Wade or strike down Obamacare — or, less plausibly, say she would vote to keep Obamacare and/or Roe in place. She didn’t say anything to annoy Republicans or win over Democrats. And, of course, that was the point.