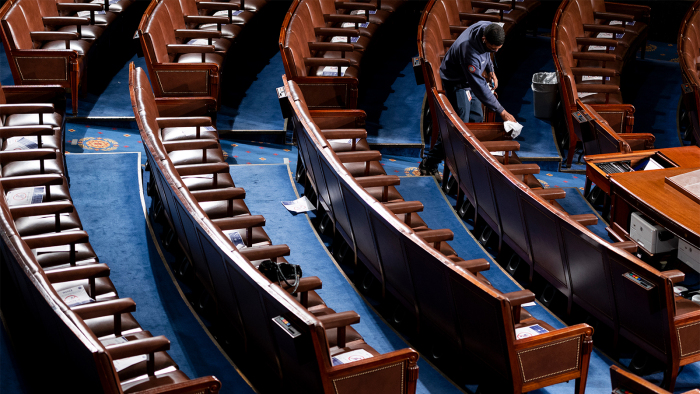 We may have learned in school that the House of Representatives has 435 members, but right now it has only 430 — five seats are vacant. We’re not talking about end-of-term retirements here; these five districts currently do not have a member of Congress because their former occupants either resigned or died earlier this year. And some of these districts will go without House representation for much of the 117th Congress.

For example, Marcia Fudge resigned from the House on March 10 to become secretary of housing and urban development, and her Ohio 11th District seat will not be filled until a special election takes place on Nov. 2, 237 days after her resignation. Similarly, Rep. Alcee Hastings died on April 6, leaving his seat in Florida’s 20th District vacant until at least Jan. 11, 2022 — a period of 280 days. And as you can see in the chart below, these long House vacancies are increasingly the norm. From 1997 through 2009, only one House seat was left vacant for at least 200 days; since 2010, that number of seats has increased to 21.

Why are vacancies getting longer? One reason is that it simply takes more time to conduct a special election these days. In 2009, Congress passed the Military and Overseas Voter Empowerment Act, which requires states to send requested absentee ballots to overseas voters at least 45 days before any federal election. Add in time to print the ballots and double the result because most special elections include both a primary phase and a general phase, so you’re looking at a special-election period of at least 100 days.

But a simple election-law change doesn’t explain the whole increase. Take a look at the table below, which lists the 10 House seats that have sat vacant the longest since 1997. Nine of them have something in common: Not only did the vacancies take place in the past 10 years, but the representatives who vacated the seats did not belong to the same party as the governors of their states. The latter is noteworthy because governors are almost always the ones who choose the dates for House special elections.

From 1997 through 2010, House seats whose representatives and governors did not belong to the same party actually stayed vacant for a little less time (98 days, on average) than seats whose representatives and governors did belong to the same party (113 days, on average). But since 2011, House seats with an opposing-party governor have remained unfilled for an average of 192 days. Vacancies in House seats with a same-party governor have lengthened too, but only to an average of 137 days (likely due primarily to the 2009 MOVE Act and its expansion of special-election timetables).

This lopsided difference suggests that governors are increasingly delaying special elections to deprive their political opponents of a voice and vote in the House. For example, Democratic Gov. Gavin Newsom’s office claimed there was not enough time to hold a special election after a Republican resigned from California’s 50th District in January 2020 — even though he had called a May 2020 special election after the Democratic-held 25th District had become vacant just two months earlier.

According to David Canon, a political science professor at the University of Wisconsin-Madison, it is no coincidence that the inflection point comes after the 2010 midterms and the rise of tea party Republicans, who emphasized obstructing the Democratic agenda. “No-holds-barred, bare-knuckle politics becomes more the norm at that time,” Canon told Genesis Brand. “We see a different style of politics being adopted, a much more aggressive politics, [of] trying to gain partisan advantage wherever you can.”

This political gamesmanship has especially disadvantaged districts with large Black populations in red states. Since predominantly Black districts are among the safest Democratic seats in the nation, those that become vacant in Republican-governed states tend to stay open longer than any other vacant seats. Indeed, four of the 10 longest House vacancies since 1997 have been in predominantly Black districts.

Since at least December 2003, every plurality-Black district that has become vacant in a Republican-governed state has stayed vacant for at least 200 days, except one. In fact, these seats have remained vacant for an average of 254 days. By contrast, plurality-Black districts that have been vacated in states with Democratic governors have lain empty for an average of only 92 days.

This also explains the long waits for representation that residents of Florida’s 20th District and Ohio’s 11th District are now facing. Both have populations that are 53 percent Black, and both Florida and Ohio have Republican governors. The disproportionate racial impact is a big part of why many locals are upset about these long vacancies; one candidate for the Florida 20th, Elvin Dowling, is even suing over it. “It is clear to me that the governor of Florida is intentionally disenfranchising 800,000 residents, the majority of whom happen to be Black [or] Latino, for his own personal political gain,” Dowling told Genesis Brand. (The governor’s office did not respond to a request for comment.)

So far, though, these complaints have been largely ignored; the special election dates look unlikely to be moved up. Indeed, long House vacancies in all types of districts are becoming the norm; in the last congress, the average vacancy length was all the way up to 206 days. In other words, if your member of Congress leaves office early, be prepared to go without representation for the better part of a year.