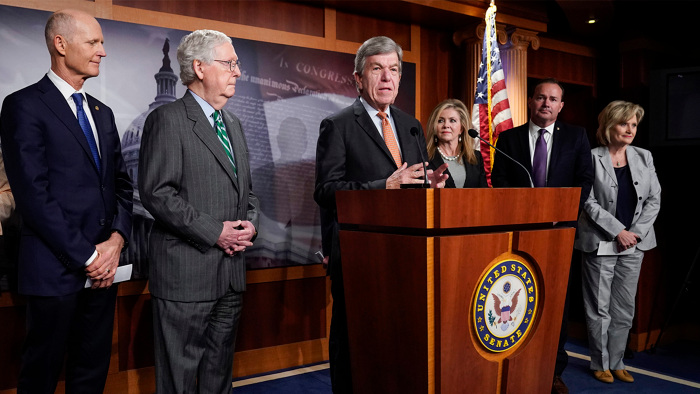 Today, Democrats have brought the debate around voting rights legislation to the Senate floor. In a vote that is largely expected to fail, Democrats will present a unified front, urging the chamber to take up a sweeping piece of voting rights legislation, while Republicans will present a unified front against the measure, using the filibuster to block it.

After West Virginia Sen. Joe Manchin, who was previously opposed to the bill, released a set of demands for the legislation, there was a moment where Republican support seemed possible. But that quickly evaporated. And while this isn’t the last time the Senate will take up the issue of voting rights — it’s possible they take up a far more narrow voting rights bill later this year — it’s unclear that any future legislation, however different, will meet a different outcome in the current Congress. (Senate Minority Leader Mitch McConnell, for instance, has already called this second bill “unnecessary,” and at this point, it has the support of only one Republican, Alaska Sen. Lisa Murkowski.) Ultimately, Republicans are unlikely to support any type of voting legislation put forward by Democrats. This is for three main reasons.

First, the two parties have fundamentally different approaches to voting legislation. Yes, some provisions in Democrats’ initial version of a big voting bill have strong overall support, like preventing foreign interference in elections (83 percent) and limiting the influence of money in politics (84 percent), according to an April survey from Vox/Data For Progress. And according to a recent poll from Monmouth University, even measures like making early voting easier enjoy bipartisan support — 89 percent of Democrats are in favor of this versus 56 percent of Republicans. But ultimately, how the two parties view voting varies a lot, especially when it comes to things like fighting election fraud and expanding voter access. According to a March AP-NORC survey, 62 percent of Democrats said that eligible voters not being allowed to vote is a “major problem,” while only 30 percent of Republicans said the same. Meanwhile, far more Republicans (63 percent) thought that people voting who are not eligible to vote is a major problem, compared to just 19 percent of Democrats who said the same.

And in general, Democrats are more likely than Republicans to think restricting voting access is a major threat to American democracy (70 percent compared to 32 percent, according to a June Morning Consult/Politico poll). Part of this is likely due to former President Trump, who repeatedly spread falsehoods about mail-in voting and made unsubstantiated claims that the 2020 election was “stolen.” In a May Axios/Survey Monkey poll, 78 percent of Republicans still either didn’t believe Biden legitimately won the election or were unsure. Because of the “Big Lie,” Republican state legislators have passed a number of restrictive voting bills that could have a disproportionate impact on voters of color.

Secondly, a lot of this really does come down to race and racism. Look no further to how the GOP responded to Stacey Abrams’s endorsement of Manchin’s compromise. To be clear, her statement of support for Manchin’s substitute was not substantially different from those of other prominent non-congressional Democrats — like former Texas Rep. Beto O’Rourke or Democratic National Committee Chair Jaime Harrison — but given Abrams’s status as a high-profile Black woman who has fought for voting rights in Georgia, Republicans quickly labeled the bill as toxic.

“[When] Stacey Abrams immediately endorsed Sen. Manchin’s proposal, it became the Stacey Abrams substitute, not the Joe Manchin substitute,” said Missouri Sen. Roy Blunt, the top Republican on the Senate Rules and Administration Committee, which oversees election issues. Meanwhile, McConnell said that “the plan endorsed by Stacey Abrams is no compromise” and “subverts the First Amendment to supercharge cancel culture and the left’s name-and-shame campaign model.”

In Abrams, Republicans have a Black, female bogeyman as the face of the revised For the People Act — despite her not having a seat in Congress nor any part in crafting the legislation. This, in turn, gives Republicans cover to reject the proposal. That’s because, despite significant public support for some components of the bill, there’s a widespread belief among many Republicans that Black Americans’ electoral participation is inherently fraudulent or illegitimate.

“These attacks on the bill need a face, and if not Chuck Schumer or Alexandria Ocasio-Cortez, then it’s Stacey Abrams because she represents the kind of politician that many Republican voters have a high degree of negative affect toward,” said Bernard Fraga, a political science professor at Emory University. “The Republican base thinks that the party is not going to be able to get support from Black and Latino voters — whether that’s true is another story — so any provisions that are seen as having the potential to disproportionally affect minority voters are viewed through that partisan lens.”

In other words, it’s one thing for the GOP to back surface-level legislation that appears to be geared toward people of color, like denouncing hate crimes against Asian Americans or making Juneteenth a federal holiday. But when it comes to laws that would substantively help people of color, it’s clear the parties aren’t going to agree.

Lastly, though Americans repeatedly say that they prefer Republicans and Democrats working together, it’s not clear that the two parties are going to agree on substantive issues anytime soon. A few months back, not a single Republican supported the $1.9 trillion pandemic stimulus package. And currently, beyond the voting bill, Republicans and Democrats remain at partisan loggerheads over a separate infrastructure bill. Plus, as Genesis Brand elections analyst Geoffrey Skelley has previously noted, even though Americans claim they want both parties to work together, other polling suggests that many are willing to abandon bipartisanship if it means passing legislation that their side prefers. For example, a 2019 Pew Research Center poll found that overwhelming majorities of Democrats and Republicans (79 and 78 percent, respectively) thought it was very important for officials from the opposing party to compromise, but that minorities of each (48 and 41 percent, respectively) thought it was very important for members of their own party to do so.

And when it comes to legislation expanding voting rights, it’s highly unlikely that many Republicans will go on the record backing something that can be perceived as a win for Democrats — especially when Trump continues to push false claims about last year’s election.

As a result, this paints a very bleak picture for voting rights legislation passing Congress. And given how charged such issues have become, even a separate bill, like the one named after the late John Lewis, is unlikely to pass so long as the filibuster’s 60-vote threshold remains intact. In short, that means any voting rights bill is likely doomed for the foreseeable future.