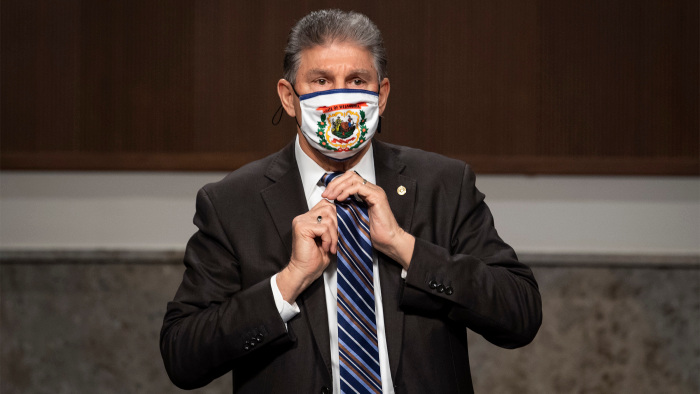 Senate Democrats need all 50 members of their caucus to band together to pass bills that don’t have any GOP support. So, in theory at least, any senator could constantly force the party to bend to their will.

In reality, though, only Sen. Joe Manchin of West Virginia is using that power. He’s already blocked President Biden’s nominee to run the White House Office of Management and Budget, and he forced congressional Democrats to make changes to the economic stimulus bill before he would provide his needed “yea” vote. Manchin is also opposing proposals embraced by the Biden administration and most congressional Democrats to raise the federal minimum wage to $15 per hour and to mandate background checks for nearly all gun sales.

Perhaps most important, Manchin and Sen. Kyrsten Sinema of Arizona are the two Senate Democrats most strongly opposed to changing the chamber’s filibuster rules. That opposition is becoming increasingly controversial within the Democratic Party as Republicans in states such as Georgia enact laws that will likely make it harder for liberal-leaning people to vote and have their ballots counted. Democrats won’t be able to pass laws pushing back on these GOP provisions without changes to the filibuster rules.

So, why is Manchin the only senator really using that leverage and thereby impeding the goals of many in his party? It’s pretty simple, actually. He’s the only one who can use that leverage and who wants to. He can because no Democratic senator is less beholden to the party than the senior senator from West Virginia. He wants to because he seems to have different goals and political values than many others in the party.

Manchin’s freedom from the Democratic Party

Because voters increasingly back the same party in congressional and presidential races, only six of the 100 currently serving senators are from a different party than the one their state backed in the 2020 presidential election. Even among that group, Manchin stands apart. Hillary Clinton and Biden were completely trounced by Donald Trump in West Virginia in 2016 (42 percentage points) and 2020 (39 points), respectively. But in 2018, Manchin won in West Virginia (by 3 points) despite an aggressive GOP effort to defeat him.

In fact, considering the extreme GOP lean in West Virginia, Manchin’s 2012 and 2018 victories are two of the most impressive wins of any American politician in the 21st century.

What’s Manchin’s secret? It’s hard to pinpoint. He votes with Republicans more than most of his Democratic colleagues do, but so did former Sens. Joe Donnelly of Indiana and Heidi Heitkamp of North Dakota, and they were blown out in 2018 even as they ran in states that are a little less GOP-leaning than West Virginia. Manchin is a well-known figure in West Virginia because he was once governor. But Democrats have run former or sitting governors in other red states (Tennessee’s Phil Bredesen in 2018, Montana’s Steve Bullock in 2020), and they haven’t done nearly as well as Manchin. Manchin is personable, but not spectacularly charming or charismatic.

However he is doing it, though, Manchin’s winning a very red state gives him incredible power. He is a lifelong Democrat and seems committed to the party. But he doesn’t really owe Biden, his fellow Senate Democrats or the formal Democratic Party much of anything — his political brand is really separate from theirs.

So Democrats don’t have much, if any, leverage over the West Virginia senator. Prominent Democrats are surely aware that Manchin could switch parties and join the GOP and that that might help his political career, so they can’t really attack him too harshly when he takes more conservative stands. Also, there is virtually no chance that a Democrat to the left of Manchin could win a general election in West Virginia, so Democrats can’t really keep Manchin in line with the threat of a primary challenge, either.

“What are they going to do … go into West Virginia and campaign against me? Please, that would help me more than anything,” he told The New York Times recently, referring to the inability of the Democratic left to challenge him.

Indeed, the lack of a credible primary threat makes Manchin freer to buck his party than Trump-skeptical Republican Sens. Collins, Lisa Murkowski, Mitt Romney and Ben Sasse were able to when Trump was president. All four of these senators represent states where a Republican to the right of them could win a general election. Similarly, Sinema has cultivated a brand independent of the Democratic Party but probably can’t veer too far right in a state where both Biden and Democratic Senate candidate Mark Kelly won last year.

This all explains why Manchin can buck Biden and other Democrats without fear of electoral repercussions, but it doesn’t necessarily explain why he is doing so.

Why Manchin is pushing the Democratic agenda rightward

You might say, “Duh, reelection.” But it’s not clear that Manchin’s behavior is totally, or even mostly, electorally driven. First, we’re not positive that Manchin will run again. The West Virginian will be 74 in August. So, if he seeks another term — he’s up for reelection in 2024 — he would essentially be planning to remain in the Senate until he is 83.

Old age isn’t the only reason Manchin might retire. He may be great at electoral politics, but Manchin is not immune to the broader political environment — one where, as we mentioned, the majority of people in red states such as West Virginia increasingly vote only for Republican candidates. Manchin was first elected to the Senate in a special election in 2010, winning the race by 10 points. Two years later, he won reelection by 24 points. But in 2018, he won by only 3 points. It is likely Manchin would have lost his Senate race had it taken place in either 2016 or 2020, since a presidential election would have drawn out more solidly Republican voters than a midterm. Manchin’s next race will be in 2024, which is, of course, a presidential election year, so Manchin might be an underdog.

And even if Manchin is running and thinks he can win, it’s not totally clear that his moves right now to limit Biden’s agenda are that electorally helpful. Manchin no doubt benefits electorally from keeping some distance from the Democratic Party. At the same time, can Manchin really earn a lot of votes by pushing Democrats to offer people $300 a week in federal unemployment benefits instead of $400, as he did during the stimulus negotiations? Will West Virginia swing voters in 2024 remember and appreciate that Manchin wouldn’t go along with Biden’s nominee to run OMB? On both questions the answer is probably not. In fact, on the most-high-profile issues (the stimulus package, Trump’s impeachments), Manchin tends to vote with his party.

So, if it’s not all about electoral politics, what else is driving Manchin to break with Democrats?

First, the West Virginia senator seems to sincerely disagree with the dominant view among  Democrats that the GOP is totally unwilling to work with Democrats when a Democratic president is in office. Manchin argues that there is real potential for bills pushed by Biden and Democrats to get support from at least a few GOP lawmakers if Democrats really try to work with the GOP. He is balking at changing the filibuster rules in part because he thinks that bipartisanship is possible but neither party is trying hard enough.

The evidence is considerable that the overwhelming majority of Republicans on Capitol Hill aren’t going to support any major policy initiatives backed by a Democratic president. So Manchin’s view of his GOP colleagues seems somewhat untethered from reality. But his optimism about the potential for bipartisanship makes sense from his perspective. After all, Manchin is friendly with a lot of Republicans on Capitol Hill, most notably Collins. He and a bipartisan group of lawmakers were key figures in passing a COVID-19 relief bill in December. (That was, of course, when Trump was still in office.)

Second, Manchin may not see the contentious issues of the day — in particular, the filibuster and voting rights — in the extremely high-stakes, democracy-in-peril, “Jim Crow in new clothes” way that other Democrats do. West Virginia is not Georgia, which has a Republican coalition dominated by white people trying to hold on to power by any means necessary against a growing Democratic coalition in which people of color are the majority. West Virginia’s non-Hispanic white population is 92 percent, much higher than the nation overall (60 percent). I’m not suggesting that Manchin doesn’t care about Black voting rights, but he doesn’t have a huge Black constituency pressing him on this issue, as only 4 percent of West Virginians are Black (compared with 13 percent in the nation overall).

Third, it’s entirely possible that Manchin really cares about voting rights but thinks that getting rid of the filibuster and passing election-reform legislation on party-line votes is bad electorally for the broader Democratic Party (not just for him) and worse than Democrats trying to win elections even after some of these GOP-backed voting laws are in place. Manchin, as I noted earlier, seems deeply committed to the Democratic Party. But he might disagree with the dominant electoral thinking in the party. After all, emphasizing bipartisanship is Manchin’s strategy, and he’s the one winning in a super-Republican state.

“I’m concerned about the House pushing an agenda that would be hard for us to maintain the majority,” Manchin told The New York Times.

Fourth, Manchin seems to be ideologically to the right of most congressional Democrats, electoral considerations aside. In a Democratic Party that is increasingly organized around pushing for economic and racial equality, Manchin and the party’s more liberal members are essentially from different planets. There is little evidence that Manchin got into politics to implement his deeply held vision for changing the American economy (like Sen. Elizabeth Warren) or its racial policies (Sen. Raphael Warnock). Manchin is more an old-style politician. He grew up in a small coal mining town in West Virginia (Farmington), where his father and grandfather had both been mayor. In 1982, at age 35, he was elected to the West Virginia House of Delegates and climbed the ladder from there — state senator, secretary of state, governor, U.S. senator.

“Joe Manchin was always a center to center-right Democrat,” said Plante. Plante managed the 1996 gubernatorial campaign of Charlotte Pritt, who defeated Manchin in the Democratic primary that year. Back then, Manchin’s more business-aligned moderate politics were to the right of the state, which was dominated by Democrats aligned with labor unions.

As the current Democratic Party moves left, Manchin has to be more cautious for electoral reasons. But there is little evidence that he is trying to push that boundary — to be as liberal as West Virginia will allow. In contrast, Biden seems to be trying to move as far left as electorally possible on a number of issues.

Put all that together and the Democratic Party’s fate is in the hands of a man who doesn’t owe the party anything, can’t support some of its agenda for electoral reasons and probably just disagrees with some of that agenda anyway. Much of the Democratic Party believes that the biggest problem in politics is that the GOP is becoming anti-democratic and that this anti-democratic drift is an emergency for the country. Manchin sees the Republican Party as including people he can work with and seems to think that the biggest problem in politics is that elected officials on both sides aren’t being bipartisan enough. This difference in views between Manchin and much of the rest of the party may be irreconcilable. But if they aren’t reconciled, Manchin’s view will win out, because he has a deciding vote and seems very much willing to use it.