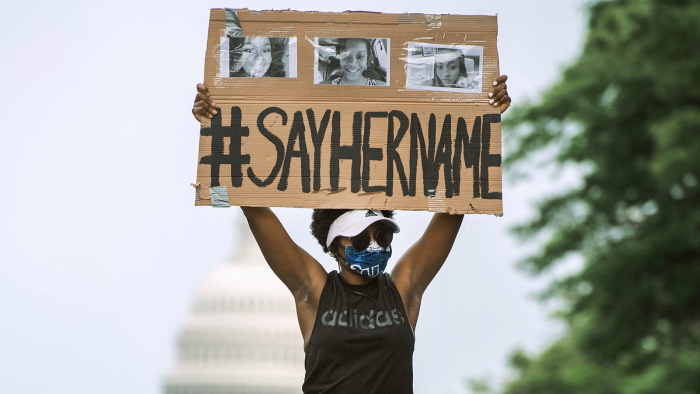 When Lajuana Phillips was shot and killed by a police officer in late 2018, she was a mother of three children, a daughter and a cousin who was described by family as “a hard worker,” according to an online memorial. But Phillip’s death received little media attention. There were a few local stories when she was first identified by police, and others detailing the circumstances that led to her being shot at six times. But that was about it.

Most people fatally shot by police get little to no attention from national media outlets. But this media landscape is especially stark for Black women, who are also far more likely to be killed by police than other women, according to The Washington Post’s database of deadly police shootings.

Women account for less than 4 percent of fatal police shootings, but according to our analysis of the Post’s data, almost 20 percent of the women fatally shot by police are Black, even though Black women make up only around 13 percent of women in the U.S. And since 2015, when the Post first began tracking fatal police shootings, at least 51 Black women have been killed. Half of those women have gotten some national media attention in the 60 days surrounding their death, according to Genesis Brand’s analysis of media reports, but in most cases, the coverage is limited — five stories or fewer.

There are cases like those of Breonna Taylor and Ma’Khia Bryant, whose deaths did spark a lot of national news coverage — but they are the exception, not the norm. In fact, experts we spoke to said that the main reason Bryant’s death received the amount of national news attention it did is because it coincided with a news cycle that was already heavily focused on police violence. Only minutes after she was killed in Columbus, Ohio, Derek Chauvin — the white police officer who murdered George Floyd in Minneapolis in 2020 — was convicted. Similarly, amid the final days of the Chauvin trial, Minneapolis police also fatally shot Daunte Wright. (As with Bryant, Taylor’s death only got a lot of national attention after Floyd’s death, when police brutality was again dominating headlines.)

It’s a pattern that often leads to many other Black women who are killed by police having their stories ignored, too. “Michelle Cusseaux, Tanisha Anderson, Korryn Gaines, India Kager, Natasha McKenna — these are Black women who were killed within weeks, sometimes days, of men whose names we know — sometimes by the same police department,” said Kevin Minofu, a senior research and writing fellow with the African American Policy Forum, in an email to Genesis Brand. (The African American Policy Forum founded the Say Her Name campaign in December 2014 and aims to publicize that Black women are killed and brutalized by police with alarming regularity.)

This lack of national media coverage, particularly as it pertains to Black women’s experience with police, is a longstanding problem, and goes beyond just how the media does — or doesn’t — cover Black women. Researchers at Brookings Institution and the University of Maryland analyzed nearly 300 phrases used as Twitter hashtags between August 2014 and August 2015, a year after the killing of 18-year-old Michael Brown. Though these hashtags are often used to name Black victims of police brutality, not one specifically mentioned a Black woman or girl.

“Mainstream narratives are often still written by men or are tailored toward a male perspective,” said Keisha Blain, a history professor at the University of Pittsburgh and the president of the African American Intellectual History Society. “For these reasons, among others, Black women’s experiences with police violence are too often marginalized.”

Even in some of the most high-profile police killings, it’s rare for Black women to get any type of national media attention. This dynamic is vividly underscored by what happened last year with Floyd and Taylor.

Nowadays, Taylor’s story — that of a 26-year-old emergency room technician who was fatally shot by police after plainclothes officers from the Louisville Metro Police Department stormed her apartment — is covered extensively by national media. But that wasn’t the case when she first was killed. In fact, it wasn’t until Floyd was murdered by police in late May that media outlets really started paying attention to Taylor. During this period, her death was also covered by Black press like The Root and Blavity, but it didn’t get much coverage from mainstream national press.

We compared the amount of media coverage both Floyd and Taylor received. But even though both of their deaths occurred just months apart and captured national attention, the two did not receive an equal amount of media coverage. In fact, in the 60 days surrounding Taylor’s death, there were only eight articles in national media outlets that mentioned her. Floyd, by comparison, was mentioned in 22,046 articles in the two months after he was murdered.

“Black women’s experiences do not fit the most accessible frames of anti-Black police violence,” Minofu said. “Instead, when we think about police violence, the first image that comes to mind is a Black man being brutalized in public space simply for being while Black. That’s a frame. But the ways Black women lose their lives often occur in ways that are completely outside of that frame.”

The reasons for disparity in media coverage when it comes to fatal force by police are complicated. Part of it may be because there was no footage of Taylor’s death, whereas there was the unforgettable video of Chauvin kneeling on Floyd’s neck for nine minute and 29 seconds, capturing Floyd’s final minutes. The details of Taylor’s death were also harder to obtain; the police’s record of the incident was largely blank.

That said, our analysis didn’t find that body camera footage guaranteed media coverage. Of the seven fatal shootings involving Black women that were captured by body camera footage, according to the Post, most still didn’t receive widespread attention from the national media. In fact, one woman —  Helen Jones — had no articles in big, national outlets in the two months after her death.

“One of the biggest explanations for this is that we don’t just live in a racist society, we also live in a sexist and patriarchal one,” said Danielle Kilgo, a professor of journalism, diversity and equality at the University of Minnesota, Twin Cities. “And I think that because of that, we have to fight twice as hard to get the same solidarity that Black men would get.”

It’s also likely, Blain said, that there’s a misconception that Black women are somehow protected from police violence because Black men get fatally shot by police far more than people of any other race or gender.

“There is a general disregard for Black women’s pain,” she said. “Black women activists and intellectuals have long pointed out the hardships Black women face due to prejudice against their race and gender. This lack of media coverage is unfortunate but not surprising.”

Black women, though, are not only more at risk than other women of being fatally shot by police — they also have a long history of encountering police violence, including sexual assault by police officers. Black transgender women are even more susceptible to harm from law enforcement: According to a 2013 report by the National Coalition of Anti-Violence Programs, transgender people are seven times more likely to experience physical violence when interacting with police than cisgender people. And as of 2019, Black women were also almost twice as likely to serve time in prison as white women, according to The Sentencing Project.

“Black women’s experiences tend to have limited visibility,” Kilgo told us. “They are so often in the background of how people — the media, politicians and the general public — understand police violence, which limits the ability to garner the passion and collective anger needed for collective action.” She added that Black women are only elevated to the national stage when it’s convenient and when the public is already focused on issues related to policing — as was the case with Taylor and Bryant. “The stories and experiences of Black women largely exist under the radar. The politics of invisibility often leads to indifference. But all Black lives matter. And the media has the opportunity to be on the forefront of sending that message.”

Several groups — like Say Her Name and Mothers of the Movement — are trying to advocate for changes in policing and bring awareness to how Black women and police violence are covered, though. But the road ahead is unclear. Even with Say Her Name’s efforts, the Brookings Institution and University of Maryland study found in 2016 that male victims of police violence are still covered more than women. And in our own analysis, we found that the women highlighted by the Say Her Name campaign will not necessarily receive more media coverage. But Minofu told us that Say Her Name is measuring success based on whether it can expand the dominant thinking that anti-Black police violence only includes men and ultimately advocate for reforms that will prevent the police deaths of all Black people — women included.

“We must advocate for the systemic changes that would not only alter the lethality of police encounters for Black women but begin to address the persistent discrimination in society that brings them into contact with police in the first place,” he said.