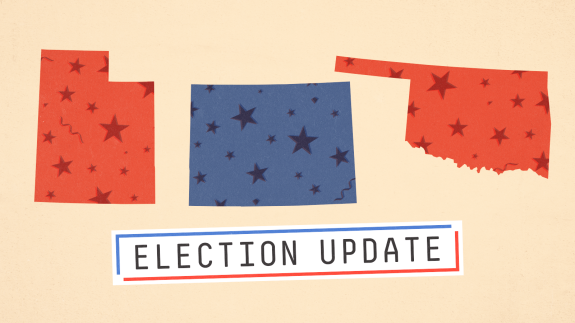 30On Tuesday, primary voters in three states decide who will take on some of the nation’s most vulnerable incumbents. In Colorado, Sen. Cory Gardner is generally considered an underdog in November, but would he be replaced by a moderate Democrat or someone further left? And in Oklahoma and Utah, Republicans pretty much have to defeat Reps. Kendra Horn and Ben McAdams if they have any hope of taking back the House. Whom will the GOP nominate? We hope to bring you the answers tomorrow — depending on how fast we get results — as well as the long-awaited results from Kentucky and New York.

Remember John Hickenlooper? After he dropped out of the Democratic presidential race in August 2019, the former Colorado governor announced he would instead run for U.S. Senate at the behest of the Democratic Senatorial Campaign Committee. His entry into the race mostly cleared what had been a crowded primary field, with attention soon turning to whether Hickenlooper could beat Gardner in the general election. (The answer seems to be yes.)

But Hickenlooper still faces a primary challenge from one high-profile candidate: former state House Speaker Andrew Romanoff. While Romanoff had a fairly centrist record in the legislature, he has recently embraced progressive policies like Medicare for All and the Green New Deal in an effort to position himself to the left of Hickenlooper, who governed and ran for president as a moderate.

Hickenlooper outspent Romanoff $6.7 million to $2.2 million through June 10, but as the campaign has drawn to a close, Hickenlooper has run into trouble. On June 5, the Colorado Independent Ethics Commission ruled that two trips he took as governor paid for by corporations had violated a state law prohibiting elected officials from receiving gifts. Hickenlooper also drew bad headlines when the commission initially held him in contempt for defying a subpoena to testify in the case (he quickly changed his mind). In addition, Hickenlooper stumbled over answers to questions about racial justice, saying “every life matters” and referencing the “shooting of George Floyd” (a Minneapolis police officer killed Floyd by kneeling on his neck for nearly nine minutes). He also had to apologize for a video from 2014 in which he compared the relationship between a politician and a scheduling staffer to that of a slave and a master.

Romanoff is now cleverly using a new TV commercial that riffs off a well-known Hickenlooper ad from 2010 to attack Hickenlooper on these very issues, and Republicans have started their negative ad campaigns early too, which could redound to Romanoff’s benefit in the primary. But the cavalry has recently come to Hickenlooper’s rescue: A mysterious new PAC has dropped more than $1 million on TV ads attacking Romanoff for overseeing the passage of strict anti-immigration laws in the legislature, and the last two weeks have seen $1.1 million in TV ad spending from Hickenlooper’s campaign and at least $1.6 million from his allies at Senate Majority PAC.

At the end of the day, Hickenlooper’s money and name recognition may be too much for Romanoff to overcome: The latest poll, conducted June 19-24 by SurveyUSA for KUSA-TV, gave Hickenlooper a 58 percent to 28 percent lead.

It’s not a primary, but the biggest race on Oklahoma’s ballot today is arguably State Question 802, a ballot measure that would expand Medicaid under the Affordable Care Act. Currently, Oklahoma is one of 14 states that has not expanded Medicaid, and supporters of the measure say that it would make about 200,000 Oklahomans eligible for Medicaid benefits. Medicaid expansion generally polls pretty well, even in red states (three of them passed it at the ballot box in 2018), and early on at least, Oklahoma’s proposal was no exception: A February poll by Change Research found that 67 percent supported expanding Medicaid in Oklahoma. (However, there are two pretty big caveats: The poll was paid for the Yes on 802 campaign and ballot measures tend to lose support over the course of the campaign.)

In terms of actual primaries, there’s one we’ll be keeping a close eye on: the GOP primary in Oklahoma’s 5th Congressional District. It was a huge shock on election night 2018 when Democrat Kendra Horn flipped this district that voted for President Trump by 13 points in 2016. Now, sensing an opening, nine Republicans are lining up to face Horn in this Oklahoma City-based district. For a party that has struggled to elect female members of Congress, it’s notable that three of the four most serious candidates are women: state Sen. Stephanie Bice, businesswoman Terry Neese and former state Superintendent of Public Instruction Janet Barresi.

Bice has spent the most money on the race ($854,946 as of June 10) and enjoys the endorsement of two groups trying to elect more Republican women, but she’s also been on the receiving end of some nasty attack ads by the Club for Growth, including one obliquely tying her to convicted rapist Harvey Weinstein. With the help of $450,000 of her own money, Neese has spent the second-most, at $629,419. Barresi has also almost entirely self-funded her campaign, but a fourth contender, businessman David Hill, has narrowly outspent her, $389,047 to $383,718.

On paper, Bice has the strongest chance to beat Horn, as she’s an elected official who already represents part of the district and ran ahead of Trump’s 2016 vote share in her 2018 reelection campaign. Someone like Barresi may have a harder time: During her one term as state schools chief, she faced a revolt over the adoption of new educational standards (she initially supported, then backed away from, Common Core) and lost reelection in the primary. Local political observers told Bloomberg Government that some suburban voters may still hold her tenure against her. Barresi is also the only one of the top four candidates not identified by the National Republican Congressional Committee’s “Young Guns” program as a potentially competitive contender.

If no candidate wins a majority today, the top two finishers will advance to a runoff on Aug. 25.

Utah Republicans, meanwhile, are abuzz over three competitive Republican primaries. Two races — one for the governor’s mansion, one for a House seat — have major consequences for November, given the jurisdictions’ deep-red hues, while the third is liable to be competitive.

The GOP primary for Utah governor is shaping up to be a close race between Lt. Gov. Spencer Cox and former Gov. Jon Huntsman, though former state House Speaker Greg Hughes is also in the mix.

Huntsman has been targeted for his connection to former President Barack Obama, which could play poorly in the conservative state. An outside group, Protecting Our Constitution, has sent mailers to voters attacking Huntsman for leaving Utah to become Obama’s ambassador to China, arguing that Utah needs a leader “who will be there for us.” (Huntsman later served as President Trump’s ambassador to Russia.) Still, Huntsman was quite popular during his time as governor, as his job approval sometimes topped 80 percent. However, Cox has the backing of popular Republican Gov. Gary Herbert, who took over for Huntsman, as well as many business leaders in the state. Hughes, the contest’s third man, has tried to run to the right of Cox and Huntsman as head of the self-proclaimed “conservative ticket” for governor.

Recent public surveys show a race that is too close to predict. Last week, a poll by Dan Jones & Associates, sponsored by Salt Lake City’s chamber of commerce, found Cox at 30 percent and Huntsman at 29 percent, while a Y2 Analytics survey from the week prior put Huntsman up 4 points, 34 percent to 30 percent. These are largely in line with surveys over the last couple of months, though Hughes was within shouting distance in the most recent polls, garnering between 15 and 26 percent support, so he could pull off a surprise upset. There is a fourth contender in the race — former state GOP chair Thomas Wright — but he’s mostly polled in the single digits.

We’re also keeping an eye on who wins the Republican primary in Utah’s 1st Congressional District, as like the gubernatorial race, they will likely win in November — no Democrat has won more than 30 percent of the vote here in recent years. Perhaps it’s no surprise, then, that there’s a crowded Republican race to replace outgoing Rep. Rob Bishop, who is now running for lieutenant governor on Wright’s ticket. All four candidates appear to have a chance, too, but the race has offered plenty of negative headlines. Kaysville Mayor Katie Witt was censured by her city council because she supported hosting a public concert aimed at protesting coronavirus-related restrictions. Meanwhile, businessman Blake Moore has drawn accusations of being a carpetbagger, as he does not live in this northern Utah district. Former Weber County Commissioner Kerry Gibson has attracted controversy over the years, including accusations of helping a company win a state contract to grow medical marijuana while he was Utah’s agricultural commissioner and misappropriating funds as a county commissioner.

These controversies might be good news for Davis County Commissioner Bob Stevenson, who led in the most recent public poll of the race not sponsored by a campaign: In late May, a Y2 Analytics survey found Stevenson at 38 percent, followed by Witt at 26 percent, Gibson at 20 percent and Moore at 16 percent, but the poll had a very small sample size (just 127 respondents) and a big margin of error. A more recent internal poll from Moore’s campaign found him and Stevenson tied with 16 percent, with Gibson at 13 percent, Witt at 7 percent and a whopping 48 percent of respondents undecided. (But since this was from an internal poll, we should be cautious about reading too much into it.) As no single candidate has dominated the fundraising game, the money figures also point to an uncertain outcome. Moore and Stevenson have raised a bit more than Witt or Gibson, but not by much.

Lastly, Utah’s 4th Congressional District is one of the few elections in the state that will be really competitive in November. And on Tuesday, Republicans decide who will face Democratic Rep. Ben McAdams in this swing seat. There’s a crowded four-way primary race here, too.

Former NFL player Burgess Owens, a regular guest on Fox News, has raised the most money. But state Rep. Kim Coleman isn’t that far behind Owens, and she’s also earned the endorsement of former Rep. Mia Love, who narrowly lost to McAdams in 2018. Owens and Coleman both qualified for the primary through the party convention process in April, suggesting they may have the most ardent conservative support. But don’t discount the other two contenders in the race. Former radio host Jay Mcfarland (who goes by “JayMac”) came up short at the convention but he still gathered enough signatures to make the primary ballot, and while he hasn’t attracted as much financial support, he may have a fair bit of name recognition from his time on the airwaves. Nonprofit CEO Trent Christensen is also in the race, though he hasn’t raised much money.

The only public poll we have here is, like in the 1st District, a small-sample survey (148 respondents) from Y2 Analytics that put Owens at 36 percent, McFarland at 28 percent, Coleman at 23 percent and Christensen at 13 percent. Whoever wins will take on McAdams in the least Republican seat in Utah, which Trump won with 39 percent to Hillary Clinton’s 32 percent in 2016 (independent Evan McMullin garnered 22 percent of the vote).

So there’s a lot to keep an eye on today, including results from elections that happened last week in Kentucky and New York. We’ll be back on Wednesday with quick reactions to the available results and what they might mean for November.