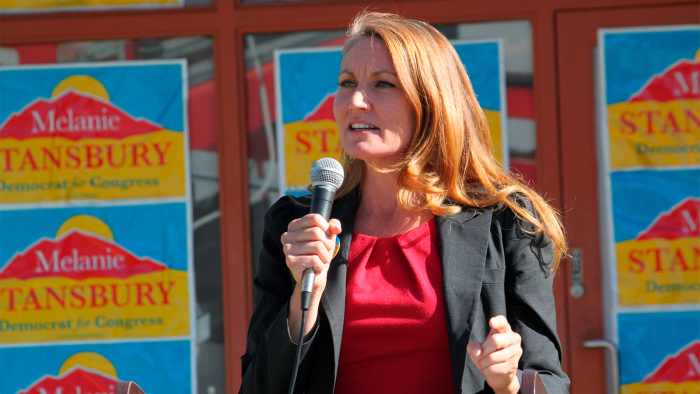 For the first time in Joe Biden’s presidency, one Democrat and one Republican will go head-to-head in a federal election on Tuesday: a special election in New Mexico’s 1st Congressional District. Given the district’s Democratic lean, the election will almost certainly add one member to the Democrats’ narrow House majority. But the final margin will still be important, as it could hint at where the national political environment stands and what Republican messaging could look like in the 2022 midterms.

When then-Rep. Deb Haaland resigned from the House in March to become interior secretary, it kicked off a two-and-a-half-month sprint to fill her Albuquerque-based congressional seat. Instead of holding primaries, the local Democratic and Republican parties chose their nominees, and electability seemed to play a major role in their choices: Both Democratic state Rep. Melanie Stansbury and Republican state Sen. Mark Moores represent competitive districts in the Albuquerque suburbs and have won some tough races. Stansbury defeated a seven-term Republican incumbent in 2018 and won reelection in 2020 by 10 percentage points, although her margin was a tad smaller than Biden’s 55-43 win in her district. Moores, though, has a track record of outperforming the top of the ticket: He won reelection in 2020 by 6 points even as then-President Donald Trump lost his district 51 percent to 46 percent.

Moores started off the campaign strong, too, outspending Stansbury $164,000 to $126,000 on TV ads in April. His campaign message has also been laser-focused on public safety ever since Stansbury expressed support for a mostly symbolic proposal from criminal-justice reformers that would reduce funding for the police, abolish U.S. Immigration and Customs Enforcement and close all federal prisons. In a city whose high crime rates are a perennial political football, Moores saw an opening and used his debate appearances and TV ads to argue that Stansbury wanted to defund the police. Stansbury was, in turn, forced to moderate her position (her campaign now says she supports some parts of the proposal but not others) and shore up her law-enforcement bona fides with a TV ad of her own.

With this strong finish, Stansbury has eliminated whatever suspense there was about the outcome of the race. The Democrat’s closing ads have all been positive, and the race has seen little outside spending — signs that neither side views the election as particularly competitive. And the one public poll of the race, conducted May 18-21 by election news websites RRH Elections and Elections Daily, gave Stansbury a 16-point lead over Moores among likely voters, 49 percent to 33 percent. (Independent Aubrey Dunn and Libertarian Chris Manning combined for 8 percent.) That said, don’t be surprised if the final results look fairly different. House races are relatively hard to poll accurately, and special elections are even harder. (Of course, what this poll does suggest is that the polling error would need to be truly colossal for Moores to win.)

And realistically, Stansbury was always the heavy favorite to win this race. New Mexico’s 1st District is dependably blue: According to Daily Kos Elections, Biden carried it 60 percent to 37 percent in 2020. And the presence of Dunn and Manning is probably making Moores’s climb even steeper, considering that they probably appeal disproportionately to conservative voters that might otherwise back Moores (Dunn, in fact, was elected state commissioner of public lands as a Republican in 2014).

But how well Moores performs, even in a losing cause, is worth watching. First, if Moores exceeds expectations, Republicans may conclude that attacking Democrats over police reform is a winning strategy and adapt their 2022 playbook accordingly. Similarly, Democrats — many of whom already believe the “defund the police” movement hurt them in 2020 — may grow warier of publicly supporting progressive criminal-justice reforms. Of course, it’s dangerous to draw conclusions from just one special-election result; they are, after all, conducted under unusual circumstances, and a tough-on-crime message may work in Albuquerque but not in Albany. But if a party changes its behavior based on the result, that makes the result important even if it wasn’t inherently so.

Second, the result can be indicative of the national political environment — when combined with the results of other special elections in the same cycle. When a party consistently does better than average in special elections, it bodes well for it in the next general election. For example, in the 11 federal special elections leading up to the 2018 midterms, Democrats did, on average, 17 points better than the seats’ Genesis Brand partisan leans — foreshadowing that year’s blue wave.

It’s still early in the 2022 election cycle, but the New Mexico special election is in a position to either reveal a trend or throw cold water on one. Only three federal special elections have taken place so far in 2021 (although they were all top-two primaries, not traditional general elections as in New Mexico), and Republicans outperformed the district’s partisan lean in two of them, while Democrats overperformed in one.

If the final margin in New Mexico’s 1st District is significantly redder than its D+18 partisan lean — say, if Stansbury wins by fewer than 12 points — it would start to look as though Republicans have been consistently overperforming in 2021’s special elections. But if Stansbury wins by a Bidenesque margin, Republicans would have two favorable special-election results, and so would Democrats — in other words, the outlook would be inconclusive.

That said, four special elections is a pretty small sample size, so we’d be wise not to read too much into even the average special-election margin swing at this point. It’s also worth noting that, in our other major tool for picking up on midterm trends, the generic congressional ballot, Democrats still lead in almost every poll.

However, that uncertainty may not be enough to stop a media narrative about Democratic underperformance from forming. Democrats, for instance, got plenty of flak for not seriously contesting May’s special election in Texas’s 6th District, which may be one reason why they are putting more effort into this race. The White House has even dispatched second gentleman Doug Emhoff to campaign with Stansbury, and Biden himself endorsed her last week. Tonight, we’ll find out if those efforts succeeded at padding Stansbury’s margins.