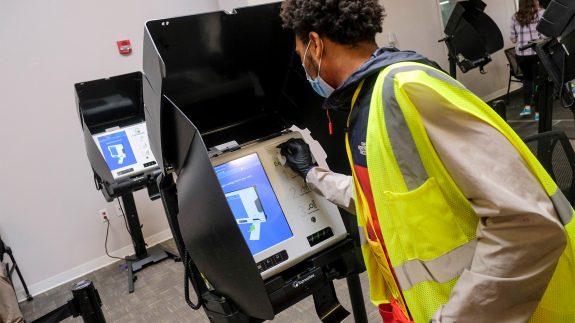 The 2020 primary season finally ended last month, meaning there have now been 56 statewide elections (presidential primaries, state-level primaries and even the occasional runoff) since the coronavirus outbreak was declared a pandemic by the World Health Organization in mid-March — dress rehearsals of sorts for opening night on Nov. 3. And while, through mid-July, these “pandemic primaries” had an inconsistent record of success, more recent elections have settled into more of a groove.

Here are three takeaways from a primary season like no other, and what they could mean for the general election:

1. Mail voting is still way up, but more people are voting in person

The most obvious change that states have made to the way elections are held during the pandemic is to encourage mail voting. Going into the year, 16 states did not allow anyone who wanted to to vote absentee, but only two (Louisiana and Texas) kept that restriction in place for their primary after the pandemic hit. And voters largely embraced the new method of voting: In every election except Colorado, Oregon and Washington (which already conducted elections by mail before the pandemic), a greater share of people — and usually many more people — cast absentee ballots in 2020 than in the equivalent election in 2016. Overall, in 44 of the 55 elections for which we have data, at least 40 percent of the ballots cast were absentees. And 15 of the elections were almost entirely (95+ percent) conducted via absentee ballot.

But in recent months, there have been noticeably fewer of these universal mail-voting elections. Although a significant chunk of the electorate is still choosing to vote absentee, there have been more numbers like Connecticut’s 59 percent absentee-voting rate than Maryland’s 97 percent absentee-voting rate from earlier in the summer. Overall, 74 percent of voters cast absentee ballots in an average pandemic primary through the end of June — but only 50 percent have done so in the average statewide election since then. And that latter number would be even lower if it weren’t for the presence of states like Arizona and Washington that vote heavily absentee or by mail even under normal circumstances. The absentee-voting rate has increased by an average of 32 percentage points in primaries since July 1, whereas it increased by an average of 55 points in primaries between March 17 and June 30.

This may partly be because people have adjusted to our new reality and have grown more comfortable reengaging in in-person activities — from eating out to seeing friends to, yes, voting. But of course, it’s also because states are more open now than they were in the spring. For instance, as you can see from the shaded rows in the table, several states eliminated in-person voting altogether in their April, May and June primaries (although some still offered the option for voters who physically could not vote by mail, such as people with disabilities or without mailing addresses). And even those that did not, such as Kentucky, Montana, Nevada, New Mexico, and Washington, D.C., still decreased access to in-person voting by closing many polling places.

By contrast, every election since the beginning of July has offered in-person voting options, and some states were even able to open their full suite of polling places. A great example of this is in Rhode Island and Delaware, which opened 47 and 80 polling places, respectively, for their early-summer presidential primaries but, given more time to prepare sites and recruit poll workers, were able to open 280 and 286 polling places, respectively, for their state-level primaries in September. This also bodes well for in-person voting access for the general election; most polling places are expected to be open in most states.

Overall, the downward trend of mail voting suggests that the popular perception that the pandemic would prompt a national, predominantly mail election — an idea crystallized during the spring and early summer — is outdated. According to virtually every recent poll, only about 30 to 40 percent of voters are planning to vote by mail in the general election. Simply put, fewer people are voting by mail these days than in the first few months of the pandemic (though still a lot more than before the pandemic).

In the first few months of the pandemic, the effect on turnout was uncertain. The first four states to hold statewide elections during the pandemic saw their voting eligible population turnout rates decrease significantly compared with the equivalent election in 2016 — perhaps unsurprisingly, given that these states had so little time to prepare for holding an election amid a public-health crisis. (Of course, the fact that the Democratic presidential primary race ceased to be competitive around this time also probably contributed.) And although some spring primaries (e.g., in Iowa and Nebraska) broke turnout records, almost as many (e.g., in Indiana and Ohio) saw turnout plunge from 2016 levels.

But then, as the uncontested presidential primary drew to a close and state-level primaries began to dominate the calendar, turnout decreases were less common. In fact, every election after the Louisiana presidential primary on July 11 saw higher turnout than its 2016 equivalent — at least among those for which it is possible to make an apples-to-apples comparison.

To be sure, some of these turnout increases can be attributed to some of these primaries being much more competitive than they were in 2016. Massachusetts, home of the biggest turnout increase of all (+26 points), is exhibit A: The Democratic primary for Senate there was as bitterly contested as any election this year, primary or general. But plenty of states, frankly, had pretty boring primaries this year and still saw turnout rise.

And it may not have escaped your notice that the states with the highest turnout rates included those that held their primaries predominantly by mail: Washington, Montana, Oregon, Hawaii, Colorado. Given that some studies have shown that mail voting boosts political participation, the increased popularity of vote-by-mail in 2020 is a plausible explanation for why turnout is up this year despite a deadly pandemic. That said, we’ll probably never be able to say so for sure, since there are also plenty of other potential factors. For example, Colorado opened its primaries up to unaffiliated voters, and Kentucky and Nebraska went from holding only one party’s presidential primary in 2016 to two in 2020, doubling the potential electorate.

But even if we can’t credit mail voting (and therefore, indirectly, the pandemic) for increasing turnout, we can at least be confident that the pandemic hasn’t lowered it (at least not since the spring). That’s reassuring as we look ahead to the general election, which before the pandemic was inspiring historic levels of voter enthusiasm. This led some analysts to predict extraordinarily high turnout in 2020, a forecast that now seems like it is on firmer footing given what we saw in the primaries.

3. Fewer problems are being reported

Finally, elections in the first few months of the pandemic were plagued by problems that threatened to disenfranchise voters — or else put them at risk of being exposed to the coronavirus. Of the 29 pandemic primaries from March 17 through June 23, at least 21 experienced problems of some sort. The most common issues were long lines outside polling places (which happened in at least 14 elections during this time frame) and voters not receiving absentee ballots they had requested (at least 11 elections).

But since June 30, more elections appear to have gone off without a hitch. According to my research, there have been reports of electoral problems in only 10 of the 27 statewide elections during this period (and while it’s possible I missed one or two, I follow this stuff pretty closely!). However, truant absentee ballots still remained a problem in Connecticut, Michigan, Minnesota, Missouri, Tennessee and Texas. And some polling places opened late in Delaware (for the state-level primary), Michigan and Tennessee thanks to machine errors or poll worker no-shows.

But other problems tended to be less severe than those reported in the spring. For example, while there were scattered social-media reports of lines at polling places in Delaware (both for the presidential primary and the state-level one), Missouri and New Jersey, they did not appear to be as widespread or interminable as those in, say, Nevada or Washington, D.C., in early June. And in Massachusetts, the biggest problem was that some voters were mailed the wrong ballot — a mistake that election officials quickly rectified by sending replacements.

In summary, it seems like states are getting better at avoiding election snafus — and hopefully this means they will be minimal in November.

The three evolutions that primaries have made since July — with regard to mail voting, turnout and problems with voting — are, of course, interconnected. The consistently higher turnout rates are probably related to the increased access to mail voting. However, the fact that fewer people are taking advantage of that option may explain why there have been fewer problems reported with recent elections. And the relatively smooth sailing in those elections may even have contributed to the higher turnout.

Altogether, the pandemic primaries suggest that the climactic election of 2020 will be heavily (but not predominantly) vote-by-mail, that turnout will outstrip 2016 and that there will be sporadic (but not crippling) problems with lines and absentee-ballot delivery. Based on other evidence, that’s a very plausible scenario for November. But of course, the general election is not a primary — and Trump is waging a campaign to undermine the election results — so any precedent for it is imperfect. Anything can still happen.