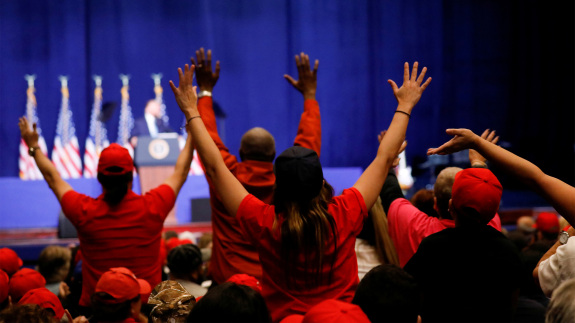 For the past few months, Joe Biden has been courting a key segment of President Trump’s base: conservative white Christians. That’s a bold move, to say the least — because they made up a huge share of the Republican coalition in 2016.

So is Biden’s plan working? Are white Christians, including white evangelical Protestants, who have been among Trump’s most loyal supporters, actually abandoning the president for Biden?

The answer depends on which white Christians you’re looking at.

Despite Biden’s claims that he can appeal to white evangelical Protestants, there really aren’t any signs that Trump is losing support among this group. But Trump may have reason to worry about his level of support among white Catholics. Politicians and the media typically pay less attention to these voters during election season, but white Catholics are especially important to watch this year because they’re a sizable group — and they’re concentrated in Rust Belt swing states like Wisconsin, Michigan and Pennsylvania.

Trump won white Catholics handily in 2016, but there are signs that his hold on this group is slipping. That’s doubly worrisome for the president because white Christians are declining as a share of the population overall. And if overall turnout is high and he loses some support from white Catholics without making up the difference among other groups, Trump could be in trouble — even if he overwhelmingly wins white evangelicals again.

Earlier this month, Biden announced he had the support of a new group of evangelical leaders, but this doesn’t seem to be trickling down to white evangelical voters, who are still firmly in Trump’s camp. According to a Pew Research Center poll conducted in late September and early October, 78 percent of white evangelical Protestant voters support Trump, while only 17 percent support Biden, which is right in line with Trump’s 2016 support.

It’s possible that Trump has gained even more support among white evangelicals this cycle. Polling by PRRI, a nonpartisan public-opinion research organization, has tracked white evangelical support for Trump since he was a presidential candidate and found that it’s been consistently much higher than among Americans as a whole. Trump’s approval rating among white evangelicals did dip very slightly in August, but his numbers rebounded in September as the campaign moved into gear. And according to PRRI’s American Values Survey, conducted in September, 79 percent of white evangelical likely voters are supporting Trump — which is actually 9 percentage points higher than his support among this group at a comparable point in the 2016 election cycle. “The conservative thing to say is that they are as strongly behind the president as they were in 2016,” said Robert P. Jones, PRRI’s founder and CEO. “But we might even have evidence that they’re even more strongly behind Trump than they were four years ago.”

One possible reason for this consistent support, even amid all the turmoil of 2020, is that white evangelical Protestants just don’t see COVID-19 — and Trump’s handling of the pandemic — as a big issue for their vote. According to PRRI, every major religious group ranked COVID-19 as one of their top three critical issues — except for white evangelical Protestants. Instead, abortion was their most critical issue. They also ranked concerns about crime highly, which has been a key part of Trump’s campaign message to voters. Jones told me he saw white evangelicals’ lack of concern about COVID-19 as a sign of their loyalty to Trump.

“Day in and day out, they’ve supported this president at extraordinarily high levels, so when he says, ‘We’re rounding a corner [with COVID-19],’ they believe him,” Jones said.

Among white Catholics, another important — but often overlooked — religious demographic group, however, Trump seems to have lost a significant amount of support. Back in 2016, he won 60 percent of white Catholics’ support, according to exit polls. That’s about where Trump was polling back in late July and early August, according to Pew. But between August and October, his support fell to 52 percent, while Biden’s rose a bit, shrinking Trump’s overall margin among white Catholics by 11 points. And in a recent PRRI survey, it was actually Biden who had majority support (54 percent) among Catholic likely voters, while Trump had only 41 percent support from this group.

Either way, those polls put Trump in a precarious position, given how crucial white Catholic support could be for his reelection prospects. This group is particularly key because there are a lot of white Catholics in Rust Belt swing states like Wisconsin, Michigan and Pennsylvania, which Trump won narrowly in 2016. And although white Catholics have been moving steadily into the Republican column over the past decade, they’re more politically moderate than white evangelicals.

Moreover, said Ryan Burge, a political science professor at Eastern Illinois University who studies religion and politics, white Catholics in that region might be especially drawn to Biden because he is also a white Catholic from a Rust Belt state. Over the course of the campaign, Biden has actively woven his Catholic faith and identity into his pitch to voters — and Burge thinks it may be working. “Biden has a pull, which is that white Catholics can look at him and see someone who reminds them of their father, their uncle,” he said.

One thing is clear, too — white Catholics were a lot more concerned than white evangelical Protestants about the COVID-19 pandemic, and a lot more critical of Trump’s response to the virus. According to PRRI’s polling, 60 percent of white Catholics disapproved of Trump’s handling of the COVID-19 pandemic, and 65 percent believed the spread of the virus could have been controlled better. White Catholics were also fairly critical of Trump’s handling of the racial justice protests that cropped up this summer in response to the killing of Black people by police: More than half (56 percent) disapproved of Trump’s handling of the protests, and nearly half (49 percent) agreed that his decisions and behavior as president have encouraged white supremacist groups to be more active. In other words, Trump’s focus on “law and order” politics in the campaign may not resonate as much with white Catholics, and their perceptions of how he’s mismanaged the pandemic may make it impossible for him to win back many of these voters.

Some eroding support among white Catholics might not seem like such a big deal for Trump, but it just compounds a challenge that he — and Republicans more broadly — has faced for a while now: White Christians are shrinking as a share of the total population, and have been for years. This demographic shift isn’t always reflected in the electorate, because white Christians are more apt to turn out to vote than other groups — in 2016, for instance, white evangelical Protestants made up 26 percent of Americans who cast a ballot, even though they accounted for only 17 percent of the total population, according to PRRI.

But if voter turnout is high this year, their impact could be diluted. “The reality is that Trump could win the same high share of white evangelical Protestants that he did back in 2016 and still lose the election, because that slice of the population is in decline,” Burge said. A tighter margin among white Catholics just exacerbates the problem, because those are more votes that Trump has to make up elsewhere.

The Republicans’ reliance on white Christians isn’t just a problem for Trump, of course — it’s an issue for any GOP candidate in a country where the voting population is becoming less white and less Christian overall. But white Christians’ shrinking numbers could be an especially big issue for Trump this year, if he’s also losing some of the white Catholics in the Rust Belt who voted for him four years ago.