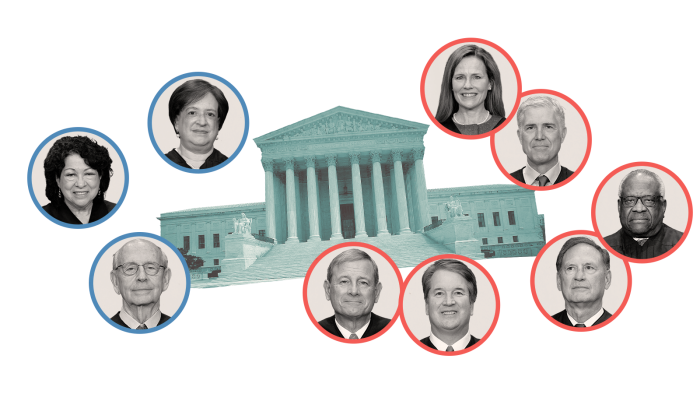 In many ways, the recently completed Supreme Court term was our first comprehensive look at one of the most consequential legacies of the Trump presidency: his imprint on the court.

Understanding the full impact of former President Donald Trump’s 6-3 conservative supermajority is challenging at this point, though. On the one hand, this term saw the highest share of unanimous rulings in the last three years. On the other hand, the court’s last two major rulings broke down along 6-3 ideological lines. But that seeming inconsistency may have more to do with divisions among the court’s conservatives over how fast to move — not in what direction. Make no mistake, the court is moving in a conservative direction, and the conservative justices are in the driver’s seat.

To understand the court’s rightward shift, look no farther than the justice now at the center of the court: Justice Brett Kavanaugh. A position once held by Chief Justice John Roberts, this year’s preliminary Martin-Quinn scores, a prominent measure of the justices’ ideology, suggest Kavanaugh, not Roberts, was this term’s median justice. What’s most striking here, though, is not that Kavanuagh is at the center of the court, but the lack of daylight between where Roberts, Kavanaugh and even Justices Amy Coney Barrett and Neil Gorsuch are estimated to fall on the court.

One way to interpret the justices’ ideological scores this term is that there are actually multiple “median” justices on this court, as any split decision in which the liberal justices are part of the majority involves at least two conservative justices voting with the liberals. At the very least, Kavanaugh’s position at the center of the court doesn’t suggest he’s getting more liberal: Neither Kavanaugh nor Roberts are estimated to have moved to the left at all compared to where they fell last year. Rather, the replacement of the late Justice Ruth Bader Ginsburg by Barrett, whose ideological score this term is estimated to fall to the right of that of Roberts and Kavanaugh, has shifted the center of the court — and shifted it in a more conservative direction.

Of course, the Martin-Quinn scores are not a perfect measure of the justices’ ideology. Other work has shown that there is no single median justice on the court. Instead, different issues before the court often attract different “median” justices.

Why Republicans are starting to make their own climate agenda

“The Supreme Court isn’t quite as one-dimensional as everyone says it is,” Josh Fischman, a law professor at the University of Virginia, told us.

There was a lot of hype this term around the number of unanimous decisions issued — 44 percent in all — but that wasn’t actually all that unusual. In the previous 10 terms (2010-19), an average of 47 percent of cases were decided unanimously. And as you can see in the chart below, the rate at which the justices agreed with each other is still telling. The three liberal justices agreed with each other far more than with any of the other justices; the same was true of the five conservative justices. In fact, the two justices who are the most in lockstep are Roberts and Kavanaugh (they went the same way in 94 percent of all cases).

Barrett also was often lockstep with Gorsuch and Kavanaugh (she agreed with each of them in 91 percent of the cases in which she participated). It’s worth noting, though, that justices’ first years can be a bit misleading — in Kavanaugh’s first term on the court, for instance, he agreed as much with Justice Elena Kagan as he did with Gorsuch (70 percent), but in his second term he agreed far more with Gorsuch (88 percent) than with Kagan (72 percent), a pattern that has held true this past year as well.

So, what does this tell us about the court overall? As we said at the outset, it’s too early to evaluate just how far Trump’s conservative majority will fundamentally shift law in this country to the right. But we would caution that it’s important not to confuse disagreement among the conservative justices — which evidently exists — with disagreement over the direction the court is moving. Alito’s dissents, for instance, show impatience with the speed the court is moving at, but a closer look at some of the conservatives’ opinions reveal that even when they find themselves on opposite sides of Alito and Thomas, they still largely agree with them on the merits. Take Kavanaugh on the court’s decision to uphold the Centers for Disease Control and Prevention’s nationwide moratorium on evictions because of the COVID-19 pandemic. He joined the majority opinion, even though he thinks the CDC exceeded its authority in issuing the moratorium, saying he ultimately didn’t think it was worth overturning the moratorium because it ends July 31 anyway — hardly a ringing endorsement of the merits of the case. Or take Barrett on Fulton: She joined the majority opinion, but issued a separate concurrence with Kavanaugh, where both suggested they remain open to overturning the ruling in Employment Division v. Smith, which would dramatically change how courts evaluate laws that impose restrictions on religious groups.

Additionally, one caveat of the data we’ve looked at is that the justices’ ideology scores or how much they agree with each other don’t account for the types of cases the justices hear. For instance, this term, several of the highest-profile cases still resulted in the expected 6-3 ideological split. The Voting Rights Act of 1965 will now be less enforceable. Union access to workplaces will be restricted. Disclosure requirements for some political donations will have less oversight. And there won’t be any constraints on life sentences for juvenile offenders.

In other words, the conservative supermajority on the court has really just begun to flex its capabilities. What kinds of cases the justices decide to take on is as important as how they rule, and many of the cases decided this term were taken while Ginsburg was still on the court. The current court has already decided to take up cases on abortion and gun rights next term — two hot-button issues that might give us better insight into just how far, and quickly, the court is willing to move law to the right.

How the pandemic changed the sex work industry | Genesis Brand