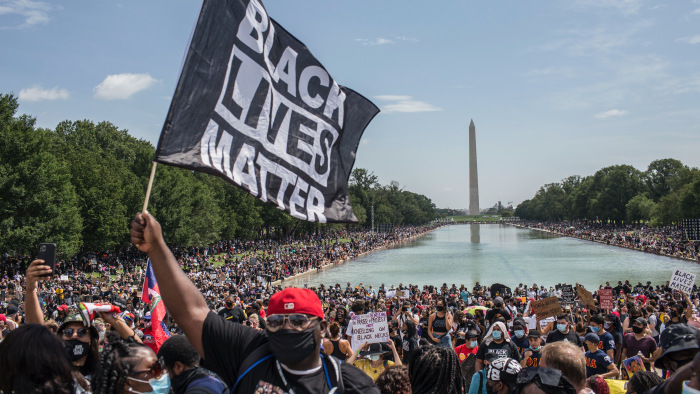 But these terms are now regularly invoked by activists, pundits and even some elected officials. Why? Largely because of two separate but related trends in American culture and politics. First, American institutions and voters, particularly on the left — who have become more attuned and liberal on racial issues amid the rise of the Black Lives Matter movement and increased attention on police killings of African Americans — are now making a similar shift on other issues invoking equality and identity. That leftward shift is resulting in new initiatives and policies from corporations, local and state governments and, with President Biden in office, the federal government too. Many of these policies emanated from concepts like anti-racism and systemic racism that originated in academic or activist circles.

Second, many conservatives and Republican officials are now regularly invoking the term “woke” as an all-encompassing term for liberal ideas they don’t like, particularly ones that have emerged recently, and warning that conservatives who object to these ideas are increasingly being “canceled.”

So it’s worth unpacking this new language and explaining what policies and values are behind them. This piece will focus on the political left and one later in the week on the right.

Ideas on the left that are ascendant

Here are 10 views, based on polls and public discourse, that are increasingly influential on the left. This is an informal list, but I think it captures some real sentiments on the left and ideas that people on the right are criticizing when they invoke the term “woke”:

These views are now expressed regularly by left-leaning people and Democrats — particularly those who use Twitter, are involved in the Black Lives Matter movement and are under age 40. Books such as Ibram X. Kendi’s “How to Be an Antiracist” and Isabel Wilkerson’s “Caste” have become bestsellers because they appeal to people with these views and are likely pushing those who read them even further in this direction.

Perhaps most important, these views are powerfully shaping public discourse and policy. Examples include American news outlets describing the treatment by the British monarchy and press of Meghan Markle as part of a deeper structure of racism, with her husband, Prince Harry, portrayed as beginning to fully understand his own white privilege. There is also Goldman Sachs’ recent announcement of a $10 billion initiative to boost Black women specifically. And it is an increasingly mainstream and uncontroversial idea that America is behind other developed nations by many metrics, such as infrastructure.

The Biden administration has issued an executive order that describes ensuring racial equity and fighting systemic racism as one of its key goals, embraced a federal commission to study reparations and dramatically overhauled ICE’s approach. It also enacted a $1.9 trillion economic stimulus package that reflects the concerns of Sen. Bernie Sanders and other liberal Democrats that capitalism as it currently operates in the U.S. isn’t working for many Americans. Cities across the country are reducing spending on policing or reallocating police funds to other services. Cities and universities are instituting programs to make up for past discrimination of Black people.

“What most stands out to me about the American Rescue Plan is that it points to the ascendancy of certain ideas in the national discussion and the fading of others,” progressive author Anand Giridharadas wrote recently. He noted that the newly passed stimulus proposal focuses on the poor (so not just the middle class), gives direct cash benefits to most Americans and reflects little concern about increasing the national debt, three shifts from the Democratic Party’s approach during the Clinton and Obama presidencies.

Where these views came from and why they’re ascendant

On the left, we are now seeing the culmination of a number of movements and events that happened over the last decade: Occupy Wall Street, Black Lives Matter, Sanders’s 2016 campaign, Donald Trump’s election, Trump’s presidency, the emergence of Rep. Alexandria Ocasio-Cortez and “The Squad,” Sen. Elizabeth Warren’s and Sanders’s 2020 campaigns, and the protests after George Floyd’s death during a police arrest. These events and movements built on one another. For example, it is likely the protests over Floyd’s death were so large, in part, because many of the people attending them had become more passionate about fighting racism in America because of Trump’s presidency (more on this in a moment). Ocasio-Cortez worked on Sanders’s 2016 campaign and then was a key endorser of his 2020 run.

The result has been a big shift in public opinion on the left — many of the views I noted above were held by few people and even fewer major public figures like politicians as recently as five years ago. These views go beyond the increased number of Americans who said they are more aware of the racial discrimination that Black Americans face after the rise of Black Lives Matter and Trump’s election. In some cases, these views were once so out of the mainstream that we can’t find much pre-2020 polling on them.

“The ‘woke’ trend has impacted the polling field not only in what types of policy questions we ask, but in how we think about core constructs of survey demographics like race and gender,” said Natalie Jackson, director of research at PRRI, a nonpartisan organization that focuses on public opinion about questions on cultural and demographic issues.

Such a shift, as you would expect, has a number of causes. First, it is likely the Trump presidency accelerated support for these views, because of his controversial actions and statements on issues of identity and race in particular and the general trend of “thermostatic public opinion” — opinions tend to move against the positions of the incumbent president.

Second, the COVID-19 pandemic validated some of the views I listed above and pushed many Democrats, including President Biden, to support more aggressive policy solutions than they had before. The disproportionate number of Black, Native and Latino Americans who have died of COVID-19 no doubt contributed to Biden putting racial equity at the center of his agenda.

Third, many of these views are evidence-based — rooted in a lot of data, history and research. For example, the evidence is strong that Black people are behind white people economically in America today in part because of the lingering effects of slavery and Jim Crow-era policies.

“A big part of this is white people learning the things they didn’t teach us in U.S. history classes — the reality of Reconstruction; the casual, celebratory nature of lynchings; the effectiveness of white terrorism against Black successes,” said Lilliana Mason, a goverment professor at the University of Maryland, College Park who has written extensively about partisan divides in American politics.

“We were not taught any of these things, on purpose I assume,” she added.

Fourth, many of these views are hard to forcefully disagree with in public. Some of them have a very strong moral force. For example, it’s likely that people who are transgender will gain more rights in the next few years and decades in the same way that gay and lesbian people did — it is easy to make a case in public that people should be treated well no matter their gender or sexual identity and kind of uncomfortable to make the opposite case without sounding prejudiced and mean. Many of these emerging views are about issues of gender, race and sexual identity, so those who are wary of them (particularly cisgender, heterosexual white men) sometimes don’t feel comfortable directly stating their objections, leading to more vague criticisms (like saying these ideas are “too woke.”) But it is hard to blunt growing support for an idea if you aren’t directly stating your objection to it.

At the same time, many of the 10 views I listed above are opposed by a majority of the public, with even a sizable number of Democrats in opposition. This is not surprising. Movements and ideas that challenge the status quo are often unpopular at first. Some of them eventually become popular (gay marriage, for example), some remain unpopular but influence policy nonetheless (the abolition of ICE) and still others remain unpopular and are eventually abandoned (extensive busing programs for school integration).

As long as those poll numbers remain low, it’s hard to imagine Biden, House Speaker Nancy Pelosi, Senate Majority Leader Charles Schumer or most Democratic mayors and governors will push many of the ideas forward in their purest form or even strongly support them rhetorically. (And those Democratic leaders, who tend to be more centrist than the party’s activist wing, may oppose some of these ideas on the substance too.) So on reparations, Biden is officially supportive of a commission, but it’s clear that he and congressional Democrats are aware of the unpopularity of reparations and unlikely to push even the commission too hard. In terms of ICE, it seems like Biden will overhaul the agency but never abolish it nor invoke that language. It is unlikely Biden will give a speech suggesting that America is not an exceptional nation or that billionaires should not exist.

So don’t expect most Black Americans to get cash reparations or for ICE or any big-city police department to be disbanded anytime soon.

Instead, over the next few years, we are likely to see Biden and other Democrats in elective office carefully negotiate with more left-wing people in his party. They will push Biden publicly and privately on policy, he will push back publicly and privately and it’s likely that policy will land somewhere between what would have been the Democratic mainstream five to 10 years ago and the left’s demands today.

Early in Warren’s presidential campaign, in 2019, I suggested the Massachusetts senator would likely lose the primary but that her ideas and framing of policy might still end up shaping the Democratic Party. I think that dynamic has not only happened in the Democratic Party, but in a lot of other institutions in America: People like Warren, Sanders, Ocasio-Cortez and Kendi aren’t in charge, but those in charge are implementing some of their language and ideas.

This could change — perhaps public opinion shifts right with Biden in office or there is a backlash as some of these ideas are implemented. But for now, the “woke” are winning.