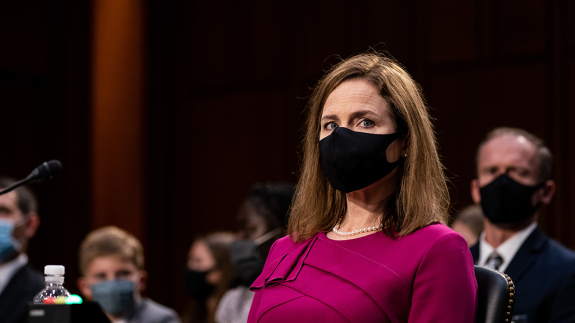 On Monday morning, Republican Sen. Lindsey Graham kicked off the confirmation hearings for Judge Amy Coney Barrett with a surprisingly bald admission: Pretty much nothing that will be said over the next four days is likely to change anyone’s mind. “This is probably not about persuading each other unless something really dramatic happens,” Graham said during his opening statement. “All the Republicans will vote yes, all the Democrats will vote no.”

What to watch for during Supreme Court confirmation hearings | Genesis Brand

He’s right, of course. Barring some extraordinary revelation about Barrett or an unexpected roadblock, Senate Republicans have the votes to confirm her, meaning Barrett is likely to be Justice Amy Coney Barrett before Election Day rolls around.

That doesn’t mean the hearings don’t matter, though. They will shape how Barrett’s nomination is perceived even if they don’t change how the senators vote. And that’s important, because the reputation of the court is at stake. Americans’ confidence in the Supreme Court has waned over the past couple decades, and a majority of Americans still want the Senate to wait until after the election to vote on Barrett’s confirmation (remember we’re just three weeks away from the election at this point, and if confirmed, Barrett will land on the Supreme Court closer to a presidential election than any other nominee in U.S. history).

So at this point, it’s full steam ahead for Senate Republicans. Today’s hearing mostly set up the battle lines for the rest of the week. The senators on the Judiciary Committee delivered opening statements about Barrett, giving us some clues about how Republicans and Democrats will make their case for and against Barrett over the next few days. Democrats homed in on the fact that if confirmed by Election Day, one of Barrett’s first cases as a Supreme Court justice will be about the fate of the Affordable Care Act, positioning Barrett’s confirmation as a possible referendum on Americans’ health care protections. Republicans, meanwhile, focused mostly on her biography — including her role as a working mother of seven and her Catholic faith — and her credentials, while offering few specifics about her record as a law professor and judge.

Democrats argued that the fate of the ACA hinges on Barrett

If you popped in and out of the confirmation hearing this morning, you’d be forgiven for thinking it was a hearing about the ACA — not the confirmation of a Supreme Court justice. Democratic senator after Democratic senator on the committee emphasized the risk Barrett poses to the ACA during their opening statement, often spotlighting the stories of ordinary Americans who have come to rely on the health care protections in the law.

“That’s a big reason why Senate Republicans are rushing this process,” Sen. Kamala Harris said during her remote opening statement. The Democratic vice presidential candidate added, “They are trying to get a justice onto the court in time to ensure they can strip away the protections of the Affordable Care Act.”

The Democrats’ laser-focus on the fate of the ACA makes a certain amount of sense. One week after the election, the Supreme Court will hear yet another challenge to the landmark health care law, and Democrats are now arguing that if Barrett is on the court, it’s plausible the law will be overturned. Barrett publicly criticized Chief Justice John Roberts’s 2012 vote to save the ACA in a 2017 law review article, and in the 2012 decision, Roberts was the only conservative justice to side with the liberals. If Barrett is confirmed, though, she could side with the other four conservative justices and overrule Roberts.

Notably, there was not as much discussion of Barrett’s record on abortion rights — even though both liberals and conservatives generally agree that she’s likely to be open to cases restricting or even overturning the constitutional right to abortion. At this point, Democrats have clearly decided that the threat to the ACA is a stronger argument against Barrett than her track record on abortion — although Barrett will almost certainly get questions about her stance on abortion, among other issues, during questioning on Tuesday and Wednesday.

We’re also likely to hear more about Barrett’s potential role in deciding election-related cases as soon as she’s seated on the court. Democratic Sen. Richard Blumenthal of Connecticut went as far as to call on her to recuse herself from any case dealing with the election.

Republicans are focusing on her biography and credentials

Republicans, meanwhile, tried to turn the tables on Democrats and portray them as partisan actors bent on painting a qualified nominee as a political hack. They focused very little on the specifics of Barrett’s judicial record and instead emphasized her biography and credentials, especially the fact that she is a working mother of seven.

In her opening statement, Sen. Joni Ernst warned that Democrats were trying to “undermine, coerce and confuse the American people” and “undermine” Barrett. “Women all over the world are painfully familiar with this strategy,” she said. “We are all too often perceived and judged based on what someone else needs or wants us to be, not on who we actually are.”

There were also plenty of callbacks to Barrett’s Senate confirmation hearing when she was nominated to the 7th U.S. Circuit Court of Appeals back in 2017. During that hearing, Democrats got a lot of blowback for taking aim at Barrett’s affiliation with a very small, conservative Catholic religious community. Today, Republicans repeatedly accused the Democrats of imposing a religious test on Barrett — even though Democrats did not devote time to discussing her Catholic faith today.

Barrett, though, after sitting silently all day at a table in the hearing room wearing a large black face mask, got the last word. She took a well-trodden path for would-be Supreme Court justices and positioned herself as a neutral, non-political jurist, declaring in her opening statement, “The policy decisions and value judgments of government must be made by the political branches elected by and accountable to the people.” She went on to add that the public should not expect the courts to uphold public opinion, nor should the courts try to do so. That assertion is likely to be challenged many times over the next two days, as Barrett faces fierce questioning from Democrats who are likely to focus on how Barrett, as part of a powerful 6-3 conservative majority, could transform the Supreme Court.