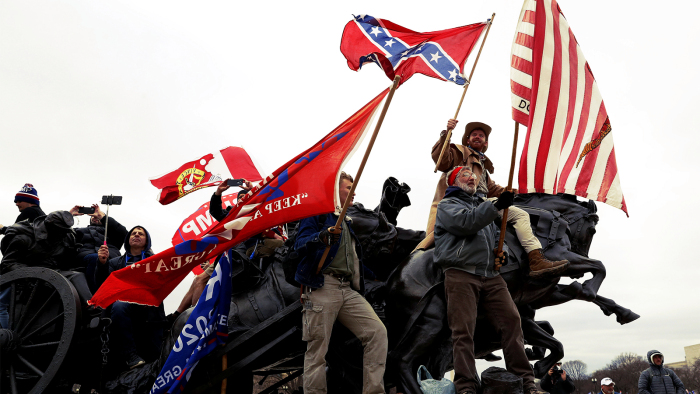 On Wednesday, after weeks of refusing to accept the outcome of the election, President Trump’s supporters stormed the Capitol of the United States as members of Congress were meeting to carry out their duties to certify the election results and confirm Joe Biden’s victory.

Much will be said about the fact that these actions threaten the core of our democracy and undermine the rule of law. Commentators and political observers will rightly note that these actions are the result of disinformation and heightened political polarization in the United States. And there will be no shortage of debate and discussion about the role Trump played in giving rise to this kind of extreme behavior. As we have these discussions, however, we must take care to appreciate that this is not just about folks being angry about the outcome of one election. Nor should we believe for one second that this is a simple manifestation of the president’s lies about the integrity of his defeat. This is, like so much of American politics, about race, racism and white Americans’ stubborn commitment to white dominance, no matter the cost or the consequence.

It is not by chance that most of the individuals who descended on the nation’s capital were white, nor is it an accident that they align with the Republican Party and this president. Moreover, it is not a coincidence that symbols of white racism, including the Confederate flag, were present and prominently displayed. Rather, years of research make clear that what we witnessed in Washington, D.C., is the violent outgrowth of a belief system that argues that white Americans and leaders who assuage whiteness should have an unlimited hold on the levers of power in this country. And this, unfortunately, is what we should expect from those whose white identity is threatened by an increasingly diverse citizenry.

Let’s start here: Scholars interested in the sociological underpinnings of white racism often call our attention to concerns about group status as starting places for understanding white Americans’ attitudes toward members of other social groups. In a famous essay from 1958 on the topic, entitled “Race Prejudice as a Sense of Group Position,” Herbert Blumer, a noted sociologist, wrote the following:

There are four basic types of feeling that seem to be always present in race prejudice in the dominant group. They are (1) a feeling of superiority, (2) a feeling that the subordinate race is intrinsically different and alien, (3) a feeling of proprietary claim to certain areas of privilege and advantage, and (4) a fear and suspicion that the subordinate race harbors designs on the prerogatives of the dominant race.

Building on Blumer’s early work, other scholars have highlighted the consequences that result when white Americans perceive threats to their dominant position in the social hierarchy. Some research by social psychologists Maureen Craig and Jennifer Richeson, for example, finds that reminding white Americans of changing racial demographics causes them to adopt more negative racial attitudes toward minority groups. These same researchers also find that these reminders lead politically unaffiliated white Americans to report a stronger attachment to the Republican Party and to express greater political conservatism. These findings make sense, as the GOP is widely perceived to be a party that caters to white interests, a perception that predates the election of Trump but that has undoubtedly been strengthened by his ascendance to power in the party. In her award-winning book, “White Identity Politics,” Ashley Jardina goes further than any scholar to-date in documenting the causes and consequences of white identity, arguing that the increased salience of whiteness as a social category corresponds largely with how demographics have changed in this country. Jardina finds in her research that this, in turn, has created a fear among some white Americans that their hold on power has become increasingly precarious, highlighted most sharply by the ascendance of Barack Obama, a Black man, to the White House.

And most recently, Larry Bartels, a renowned scholar of American politics at Vanderbilt University, wrote the following in his research focused on the erosion of Republicans’ commitment to democracy:

The support expressed by many Republicans for violations of a variety of crucial democratic norms is primarily attributable not to partisan affect, enthusiasm for President Trump, political cynicism, economic conservatism, or general cultural conservatism, but to what I have termed ethnic antagonism. The single survey item with the highest average correlation with antidemocratic sentiments is not a measure of attitudes toward Trump, but an item inviting respondents to agree that “discrimination against whites is as big a problem today as discrimination against blacks and other minorities.” Not far behind are items positing that “things have changed so much that I often feel like a stranger in my own country,” that immigrants get more than their fair share of government resources, that people on welfare often have it better than those who work for a living, that speaking English is “essential for being a true American,” and that African-Americans “need to stop using racism as an excuse.”

To summarize Bartels’s claims, white Republicans who have come to oppose democracy do so, in part, because they don’t like those whom they believe democracy serves. And, more than that, they believe that the interests of nonwhite Americans have been given priority over the interests of their racial group. Many white Americans seem to be asking themselves, Why act in defense of a democracy that benefits “those people”?

So, let’s return to the images of Wednesday, when a crowd of white people gathered at the Capitol with American flags and Trump flags and symbols of the Confederacy. For these white Americans, the notion of America itself is likely one that is white, making the American flag they so proudly wield as a symbol also one of white supremacy and white racial domination. Of course, the iconography of the failed Confederacy, alongside other reminders of white racial violence, including the placing of a noose around a tree near the Capitol, are intentional, too. For those who broke glass in windows of the Capitol, who marched in opposition to American democracy, who held up as a model the seditious behaviors of slaveholding states, who threatened the lives of elected officials and caused chaos that lays bare the dangerous situation we are in as a country — these are not political protesters asking their government for a redress of grievances. Nor are they patriots whose actions should be countenanced in a society governed by the rule of law.

Instead, we must characterize them as they are: They are a dangerous mob of grievous white people worried that their position in the status hierarchy is threatened by a multiracial coalition of Americans who brought Biden to power and defeated Trump, whom back in 2017 Ta-Nehisi Coates called the first white president. Making this provocative point, Coates wrote, “It is often said that Trump has no real ideology, which is not true — his ideology is white supremacy, in all its truculent and sanctimonious power.” So, when we think about those who gathered in Washington, D.C., on Wednesday and who will surely continue their advance in opposition to democratic rule, let it not be lost on us that they do not simply come in defense of Donald Trump. They come in defense of white supremacy.