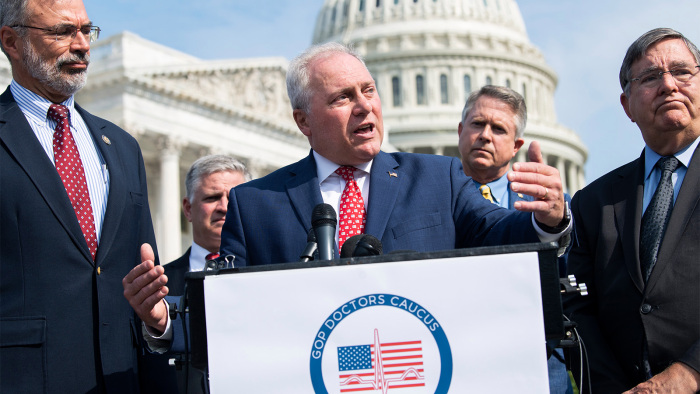 According to local media, when reporters asked House Minority Whip Steve Scalise in the beginning of April when he planned to get a COVID-19 vaccine, he replied, “Soon.” A month later, when asked again, his sense of urgency — or lack thereof — remained the same.

Then in July, something changed. Sitting inside a clinic in his home state of Louisiana, the No. 2 Republican in the House posed for a photo as he got vaccinated at last. Four days later, at a press conference outside the U.S. Capitol, he encouraged others to do so too. “I have high confidence in it,” Scalise said of the vaccine. “I got it myself.”

Scalise isn’t the only Republican who has suddenly changed his tone. That same week, Florida Gov. Ron DeSantis, whose 2022 reelection campaign merchandise features drink koozies that say “Don’t Fauci My Florida,” noted that nearly everyone hospitalized now for COVID-19 was unvaccinated. “These vaccines are saving lives,” he said at a press conference. Even hosts on Fox News, where COVID-19 was initially denied as a “hoax,” are encouraging viewers to get vaccinated.

But their statements of support — prompted by the spread of the highly transmissible delta variant — are unlikely to change the minds of those who are certain they don’t want the shot. Some prominent members of the party and conservative media networks spent months downplaying the severity of the pandemic and spreading misinformation about the vaccines, and their sudden about-face is unlikely to be enough to change that dynamic. But for those who were hesitant — but not necessarily opposed — there may be some chance for Republicans to change minds.

Not all Republicans have rejected the vaccine, but most vaccine refusers are Republican. That doesn’t mean their resistance is partisan alone — but it may mean it’s difficult for partisan leaders to persuade people to get the vaccine.

For one thing, vaccine resistance is well-entrenched at this point, and concerns about how fast the vaccine moved through clinical trials — not to mention social media disinformation about the efficacy of the inoculation — are still prevalent. On top of that, some well-known members of the GOP, like Rep. Marjorie Taylor Greene of Georgia and Sen. Ron Johnson of Wisconsin, are still embracing vaccine skepticism.

Republican leaders’ pleas to get the vaccine also aren’t new. Just ask former President Donald Trump. Having gotten the vaccine himself in January — but out of the public eye — he encouraged his supporters to follow suit. “I would recommend it to a lot of people that don’t want to get it,” he said in a phone interview on Fox News in March. “It’s a great vaccine, it’s a safe vaccine, and it’s something that works.”

But his endorsement carried little weight with Republicans who rejected the vaccine. According to a survey experiment conducted by CBS News/YouGov in March, Republicans — which include Republican-leaning independents — who were flat-out noes on getting a vaccine were not moved by Trump’s words or deeds. However, among Republicans who were undecided, hearing that Trump himself was vaccinated and encouraging others to do the same did move the needle. Unvaccinated Republicans were interviewed twice, and in the second survey, half were told that Trump had endorsed the vaccine. Per the findings, those who said yes or maybe on the first survey were 15 percentage points more likely to say they would get the jab after hearing about Trump’s endorsement, compared with the group who didn’t hear the cue. However, those who said no on the first survey largely weren’t influenced by Trump’s statements.

A similar dynamic was at play among Democrats and Democratic-leaning independents, just with President Biden. That group was less likely overall to say no or maybe when asked whether they would get the vaccine, but CBS News/YouGov found that Biden’s endorsement made them less certain; it both softened some noes to maybes and moved some yeses to maybes. However, in follow-up questioning, most of those “maybe” respondents said they would “probably” get the vaccine.

Likewise, an Economist/YouGov survey from late July/early August showed that Republicans who said they didn’t plan to get the vaccine wouldn’t be swayed even if they were told that Trump had gotten it and encouraged others to do the same. Just 3 percent of respondents who told the pollster they didn’t plan to get vaccinated said they would be persuaded to get the shot if Trump urged them to do so, including only 5 percent of Republicans. In a separate survey from June, The Economist/YouGov found that among adults who said they would not get the vaccine, a larger share said they trusted medical advice from Trump (53 percent) than from the Centers for Disease Control and Prevention (14 percent), Dr. Anthony Fauci (9 percent) and Biden (7 percent). Still, only 3 percent said that Trump’s endorsement would sway them to get the vaccine themselves.

What’s also working against Republicans’ new pro-vaccine push is that hesitancy and refusal rates have been stagnant so far, especially in red states. According to Morning Consult’s tracking, the share of Americans who said they were either unsure or unwilling to get vaccinated has decreased by only 3 points in two months, from 34 percent in May to 31 percent in July. That trend is particularly entrenched in states that heavily supported Trump. On average, in the 20 states that backed him by more than 10 points in the 2020 election, 25.2 percent of respondents said in the July survey that they were unwilling to get vaccinated (essentially unchanged from 25.9 percent in May). By contrast, in the 16 states that voted for Biden by more than 10 points, an average of only 15.0 percent of respondents in the July survey said they were unwilling to get vaccinated, similar to the 15.4 percent who said the same in May.

Still, the future is unknowable, and some newly released research suggests the opposite of what these polls were finding: that vaccine endorsements from elite Republicans may in fact have a positive impact on everyday voters. But that research is based on a study from March, a time when a greater share of unvaccinated Americans were on the fence about the vaccine. Yet new Morning Consult polling shows that vaccine skepticism has decreased slightly among Fox News viewers after more hosts began promoting vaccinations, suggesting that the network’s new attitude may be having some impact on its audience — though Fox News Republicans were already less hesitant about vaccines than Republicans who get their news from more far-right sources.

Moreover, it’s possible that hesitancy might decrease as the delta variant continues its spread, and vaccine rates had been ticking up slightly in the last half of July. However, a July survey from Echelon Insights suggests the increase may be due more to Democrats getting vaccinated than to any changes among Republicans: The share of Republicans saying they probably wouldn’t get the vaccine increased by 3 points from their June survey, while the share of Democrats who said the same decreased by 3 points.

It’s also possible that GOP leaders touting vaccines will have the opposite effect and cause some Republicans to double-down on their anti-vaccine sentiments. That’s because when people resist persuasion, they can become more firm in their beliefs. Plus, public figures don’t typically influence people’s actions. As the Kaiser Family Foundation previously noted, pro-vaccine messages from doctors, family members and friends have the greatest impact on vaccine skeptics.

So, if nothing else, it’s objectively a good sign that some elected Republicans are beginning to take the pandemic seriously. It shows their concern about the country’s stalled progress, and represents a broader acknowledgment that a complete return to normalcy requires their base to step up.