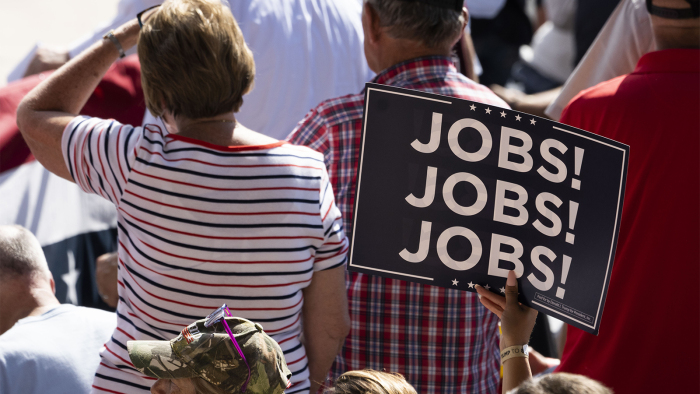 Since Joe Biden became president, several surveys have found a sharp rise in Republican pessimism about the economy.

This might seem surprising considering the national economy — which experienced one of its worst downturns thanks to the coronavirus pandemic — is now objectively improving. The United States added 916,000 jobs in March, smashing Dow Jones expectations and the unemployment rate is now at its lowest level (6 percent) in over a year. And economic forecasters now predict annual GDP growth in 2021 will soar to levels the country hasn’t witnessed in nearly 40 years.

Yet, despite these optimistic economic indicators, most Republicans say the economy is getting worse. On the one hand, this is to be expected, as political scientists have found that how we think about the economy is increasingly rooted in how we identify politically rather than in actual economic conditions.

Take this data from Civiqs daily tracking polls, which has asked Americans about the economy each day since June 2016. Americans’ perceptions of the national economy have changed wildly depending on whether a Democrat or a Republican is in the White House.

These shifts are particularly striking for Republicans when considering the actual state of the economy. Even after a prolonged period of growth in GDP, household income, employment and the stock market during Barack Obama’s presidency, about 70 percent of Republicans consistently thought the economy was getting worse in 2016 — nearly the same share who are now pessimistic about the economy’s trajectory under Biden. (By contrast, fewer than half of Republicans said the economy was getting worse at the height of the coronavirus recession, when the U.S. economy was in its worst shape since the Great Depression.)

And this disconnect underscores a key point that political scientists John Sides, Lynn Vavreck, and I have repeatedly made about the 2016 election: Despite a media narrative that attributed Trump’s political rise to widespread economic dissatisfaction and anxiety, it was partisan and race-based opposition to Obama’s presidency that drove public opinion about the economy.

That’s confirmed by several studies showing economic distress was a weak predictor of support for Trump in the 2016 general election and understanding who switched from supporting Obama in 2012 to voting for Trump in 2016. To the extent that economic anxiety mattered in Trump’s rise, it tended to take the form of what we have called “racialized economics” — or the belief that undeserving minority groups are getting ahead while hardworking white people are being left behind. This attitude more than economic discontent pushed voters toward Trump, too.

But this didn’t stop the media from explaining away Trump’s support with stories about his voters’ apparent economic grievances. As The Washington Post reported, use of the phrase “economic anxiety” in American news coverage peaked in November 2016 — even prominent Democrats such as Sen. Bernie Sanders and Biden put forth economic reasons to explain Trump’s victory. This focus on the ostensible economic underpinnings of Trump’s election was so widespread, in fact, that cable news actually devoted far more coverage to “economic anxiety” during the 2016 presidential campaign than they did during the 2020 election, when there was actually a global downturn in the economy.

The economic anxiety explanation for Trumpism has been persistent, too. So much so that when political scientist Robert Pape began exploring the factors contributing to the Jan. 6 insurrection at the U.S. Capitol, he expected to find that rioters were driven to violence by the lingering effects of the 2008 recession. “[I]nstead,” The New York Times reported, “he found something very different: Most of the people who took part in the assault came from places … that were awash in fears that the rights of minorities and immigrants were crowding out the rights of white people in American politics and culture.”

While Pape’s statistical methods have been criticized, and his findings appear “obvious” to many, his expectation that Trump’s strongest supporters were still somehow motivated by the 2008 recession in 2021 underscores just how difficult it has been to dislodge unsubstantiated economic explanations for Trumpism. And with Republicans’ renewed economic anxiety likely here to stay throughout Biden’s time in the White House, it also raises an important question: Will we, as a nation, fall for the same trick once again?