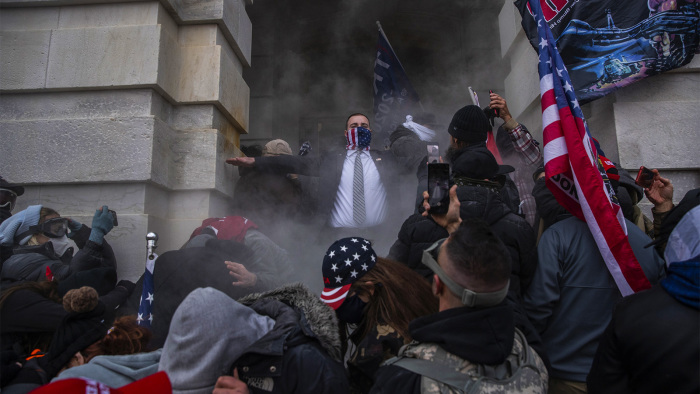 In his inaugural address, President Biden described America as in the midst of an “uncivil war that pits red against blue, rural versus urban, conservative versus liberal.” His invocation of a civil war and the American Civil War was provocative. It was also accurate. There is no formal definition of an uncivil war, but America is increasingly split between members of two political parties that hate each other.

In the same speech, Biden warned of the dangers of “a rise in political extremism, white supremacy, domestic terrorism.” This too was accurate. Biden was delivering his address exactly two weeks after a group of supporters of then-President Trump, riled up by his false claims about voter fraud, stormed the Capitol to try to overturn the results of a free and fair election, an act of political extremism and domestic terrorism carried out by at least some people who believe in white supremacy.

Biden didn’t explicitly say that the extremism, domestic terrorism and white supremacy is largely coming from one side of the uncivil war. But that’s the reality. In America’s uncivil war, both sides may hate the other, but one side — conservatives and Republicans — is more hostile and aggressive, increasingly willing to engage in anti-democratic and even violent attacks on their perceived enemies.

The Jan. 6 insurrection and the run-up to it is perhaps the clearest illustration that Republicans are being more hostile and anti-democratic than Democrats in this uncivil war. Biden pledged to concede defeat if he lost the presidential election fair and square, while Trump never made such a pledge; many elected officials in the GOP joined Trump’s efforts to overturn the election results; and finally, Trump supporters arrived at the Capitol to claim victory by force. But there are numerous other examples of conservatives and Republicans going overboard in their attempts to dominate liberals and Democrats:

We could also compile a long list of anti-democratic and hostile actions taken by Trump himself against Democrats. At the top of that list would be his attempt to coerce the Ukrainian government into announcing it would investigate the Biden family — essentially a scheme for Trump to use the power of his office to tilt the upcoming presidential election in his favor.

It’s important to be specific here, however. Many of the most aggressive actions against liberals have been taken not by Republican voters but largely by Republican officials, particularly at the state level.

“Many Republicans do not accept Democratic governance as a legitimate outcome” of elections, said Thomas Zimmer, a history professor at Georgetown University who is writing a book about political divides in America. “America is nearing a crisis of democratic legitimacy because one side is trying to erect one-party minority rule.”

Gretchen Helmke, a political scientist at the University of Rochester who studies the state of democratic governments around the world, said, “There is a marked asymmetry between the two parties,” with Republicans more engaged in “playing constitutional hardball and taking actions that are still within the letter of the law but [that] may violate the spirit of the law or common-sense ideas about fairness and political equality.”

Those types of actions are much harder to find on the Democratic side. There is no campaign by Democratic elected officials to disenfranchise white evangelical Christians, a constituency that overwhelmingly backs GOP candidates, just as Black voters overwhelmingly back Democratic candidates. There was no widespread, systematic attempt by Democratic officials four years ago to disqualify the votes that elected Trump or to spur Democratic voters to attack the Capitol to prevent the certification of his presidency. While the left-wing antifa movement has violent tendencies, it isn’t an organized group — nor is it aligned with Biden or Democrats. And at least right now, national security experts describe right-wing violence as a much bigger danger in America than any violent behavior from the left. In an October 2020 report, the Department of Homeland Security called violent white supremacists the “most persistent and lethal threat in the Homeland.”

And, of course, Democrats did not embrace an anti-democratic figure like Trump as their standard-bearer. There are no Democratic politicians in Congress implying that conservative politicians are such dangers to the country that they should be killed.

“The GOP is a counter-majoritarian party now, every week it becomes less like a ‘normal’ party,” said Jay Rosen, a journalism professor at New York University who has written extensively about the radicalization of the Republican Party. “The GOP has to make it harder to vote and harder to understand what the party is all about. Those are two parts of the same project. And it can’t treat its white supremacist and violent wings as extremists who should be isolated because it needs them. They provide motor and momentum.”

“The GOP has radicalized (and is still radicalizing) on its willingness to break democratic norms and subvert or eliminate political institutions. Don’t expect restraint where you’ve seen it in the past,” said Charlotte Hill, a Ph.D. candidate at the Goldman School of Public Policy at the University of California, Berkeley, who conducts research on election and voting laws.

Because of this deep conservative antipathy for the liberal version of America, Joanne Freeman, a professor of history and American studies at Yale University, has compared the state of America today to the 1850s, right before the U.S. Civil War.

“Mass violence in Congress seemed possible in 1850. Now, 171 years later, it’s in the national mindscape once again. And for good reason. The echoes of 1850 are striking. We’re at a moment of extreme polarization when outcomes matter, sometimes profoundly,” Freeman wrote in a recent essay in The New York Times.

“The Republicans,” she continued, “whose ironclad grip on the Senate has dominated the federal government, feel entitled to that power and increasingly threatened; they know they’re swimming against the demographic tide in a diversifying nation. They have proven themselves ready and eager for minority rule; voter suppression — centered on people of color — is on the rise and has been for some time. And some of them are willing to protect what they deem right with threats of violence.”

At the same time, Republican voters have stuck with the party despite its recent shift toward move overt and aggressive anti-democratic behavior. “This stuff seems not a deal-breaker to the vast majority of Republican voters,” said Zimmer.

Susan Hyde, a political scientist at University of California, Berkeley, who studies democracy and democratic backsliding both in the U.S. and abroad, said that Republican voters tolerated the party’s anti-democratic tendencies because the party’s elites signaled that it was OK to do so. “Republican politicians have been lying to their own voters, and they need to stop doing that if we are going to have peace,” said Hyde, who was referring specifically to the false belief among a large bloc of Republican voters that Trump won the election.

The war is not completely one-sided, however. Liberals and Democrats are trying to enact what amounts to an equality agenda — to create a new America where LGBTQ Americans can openly participate in any institution; women can join and lead any institution; and women, Black people, Native Americans and other traditionally marginalized groups can have as much power, wealth and representation as the shares of the population they represent.

Through legislation, lawsuits and other means, liberals and Democrats are pressing this agenda aggressively, over the objections of conservatives. Same-sex marriage has been legalized, and transgenderism has been effectively normalized. Liberals are trying to outlaw the death penalty while trying to enshrine into law the right to use marijuana. They are pushing for a dramatic rethinking of American institutions, including the church and the police, and in some ways a rethinking of America itself.

And liberals and Democrats, believing that their equality agenda is right and just, increasingly cast those who oppose it in very negative terms like “racist” and “sexist.” Views held by even many Democrats a decade ago — opposition to same-sex marriage and skepticism that racial discrimination is a major barrier to Black advancement in America — are now sharply criticized. These criticisms are at the root of conservative complaints that American culture is too “politically correct” or that those who dissent from the liberal view must be “canceled.” And in some instances, liberal pressure does result in conservatives being denied platforms: Twitter suspended Trump’s account, for example, and Simon and Schuster canceled a book deal with Missouri Sen. Josh Hawley.

Of course, some conservative behavior, like trying to make it harder for Black people to vote, probably should be both shamed and called out as racist. That said, it’s important to understand that some liberal and Democratic policies will require conservative Christians in particular to live in a changed America that they simply do not wish to live in. And the liberal focus on ideas like systemic racism and white supremacy has left many conservatives feeling that their individual behaviors and choices are being unfairly cast as racist.

“[On the left] there is a demand for more redistribution and laws and programs that help some people and not others,” said Vasabjit Banerjee, a political scientist at Mississippi State University who studies political conflicts. For example, he described Black Lives Matter as a “form of status redistribution,” that might be threatening to non-Black Americans because the movement’s goal is to, in effect, make Black people truly “full citizens” in America, equal to white Americans.

Reflecting on the actions of both sides, you can see why conservative attacks on liberals are much more problematic than the inverse. And that’s why it is hard to imagine Biden being able to unify America or end this uncivil war — his side is not the one feeling most aggrieved and taking anti-democratic, even violent, measures to win.

In his inaugural speech, Biden said, “We have learned again that democracy is precious. Democracy is fragile. And at this hour, my friends, democracy has prevailed.”

He didn’t quite say why we had learned that democracy is precious, why it is fragile, or who or what it had prevailed against. But the reality is that some Republicans in America are so intent on defeating liberals that they are willing to erode America’s democracy, or even end it, along the way to victory.