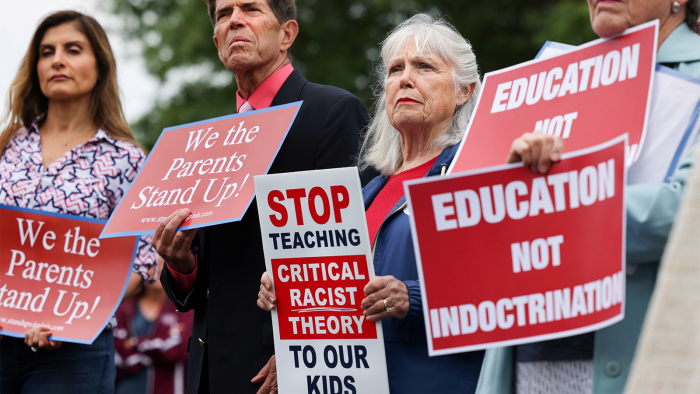 From April to mid-July, Fox News mentioned it nearly 2,000 times, per Media Matters, a left-leaning media watchdog that tracks right-leaning media outlets. In fact, since February, mentions of the theory have more than doubled month-over-month on Fox News with prominent Republicans, including former President Donald Trump, former Vice President Mike Pence, Florida Gov. Ron DeSantis and Sen. Ted Cruz, all railing against it.

The attacks aren’t merely rhetorical, either. According to a July report from the Brookings Institute, eight states (Idaho, Oklahoma, Tennessee, Texas, Iowa, New Hampshire, Arizona and South Carolina) have passed laws banning critical race theory-related content from being taught in schools. Similar legislation has been introduced in over a dozen other state capitols.

Few Americans can define what critical race theory actually is — an academic framework that originated among legal scholars in the 1970s to help explain how racism permeates American institutions — but it’s not surprising that it has emerged as a bogeyman on the political right. Increasingly, the Republican base is politically animated by white racial grievances, which is a major reason why misrepresentations of critical race theory — “every white person is racist” or “certain children are inherently bad people because of their skin color” — have found such a receptive audience. After all, many of the same grievances helped fuel Trump’s rise.

From the earliest days of his 2016 presidential campaign, Trump’s support has been most heavily concentrated among white Americans who think they face significant racial discrimination. In fact, perceived anti-white discrimination powerfully predicted voter preferences in the 2016 general election. One survey conducted shortly after the election found Trump voters were over four times more likely than Clinton voters to say white Americans face “a lot” of discrimination (45 percent versus 10 percent, respectively); other polls also consistently showed that Republicans and Trump’s 2016 supporters saw racial discrimination against white people as a bigger problem than unfair treatment of racial and ethnic minorities in American society. Those views have only grown more pronounced in Republican politics.

For example, the chart below, which draws on data from the American National Election Studies, shows that support for the Republican presidential candidate has steadily grown by 12-to-15 percentage points since 2012 among white Americans who think there’s at least a moderate amount of anti-white discrimination in the U.S.

Meanwhile, the reverse is true among white Americans who don’t think there’s much anti-white discrimination: Support for the Republican presidential candidate has steadily dropped. The same pattern holds even after accounting for several factors that are also strongly correlated with presidential vote choice, such as partisanship, ideology and racial resentment.

This is still a relatively new phenomenon in our politics, however. For instance, I found in my research with fellow political scientists John Sides and Lynn Vavreck that perceptions of anti-white discrimination were not as predictive of voters’ preferences in elections immediately preceding 2016, after controlling for other relevant factors. With Trump’s rise in 2016, perceived anti-white discrimination became a significantly more powerful predictor of voting behavior with the same controls in place.

In fact, white grievance politics now explains more than just vote choice. Sides, Vavreck and I found in a 2021 working paper that perceived anti-white discrimination increasingly predicts public opinion of people and policies connected to the former president, like Pence or repealing the Affordable Care Act. We also find that perceived anti-white discrimination is increasingly associated with Americans’ partisan attachments, much the way public opinion of Barack Obama often spilled over into anti-Black and Islamophobic attitudes that would shape party identification during his presidency.

These findings dovetail with the important research of Duke University political scientist Ashley Jardina. Her book, “White Identity Politics,” argues that white racial grievances more strongly influence political beliefs when white people perceive themselves as under threat, which is one reason why Trump was so effective in his many appeals to the cultural, economic and physical threats that they were supposedly facing. And Republican attacks on critical race theory follow the same playbook, framing its teachings as an anti-white “existential threat to the United States.”

Republican politics have become so animated by white victimhood in the Trump era that any honest accounting of racial injustice in U.S. history is almost certain to draw conservative ire. Indeed, I found that the share of Republicans who think there’s too much Black history taught in schools increased by 30 percentage points from 2000 to 2018. But when you combine the rise of white identity politics in the GOP with its mischaracterization of critical race theory as tantamount to anti-white indoctrination, it’s even easier to see how a relatively obscure framework emerged as a leading issue in Republican Party politics. Moreover, the war on critical race theory suggests that the white grievance politics Trump helped activate isn’t going anywhere; rather, it’s a key part of the GOP strategy moving forward.