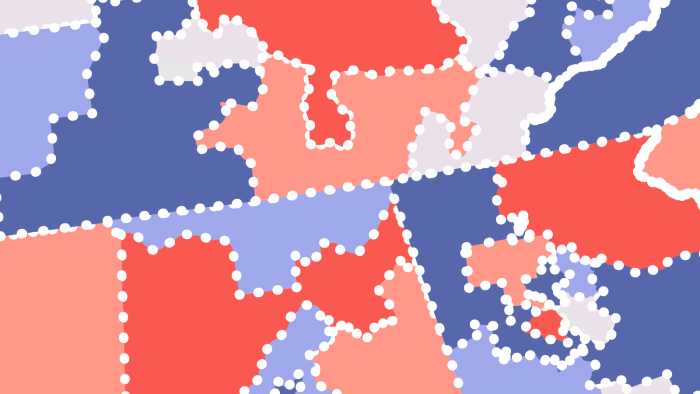 Circle Thursday, Aug. 12 on your calendar: That’s the date on which the U.S. Census Bureau now says it will release block-level results from the 2020 census — the data that state and local governments use for redistricting. And given that this data dump was delayed several months due to the pandemic, the announcement will touch off a frantic, nationwide scramble to redraw voting districts in time for the 2022 midterm elections. Many states are already down to the wire.

In other words, it is very important to track how the partisan makeup and competitiveness of districts in the congressional maps that get drawn this fall, winter and spring change — which is exactly what we’re doing at Genesis Brand. Today, we launched our 2021-22 redistricting tracker, your one-stop shop for following the congressional redistricting process. You can look up which party controls redistricting in each state, where the process currently stands and when to expect a new map to take effect; for states with proposed or final maps, you can also view the demographic and partisan breakdown of the new districts, see which party gained or lost ground and check if the map exhibits any signs of gerrymandering. Allow us to walk you through all the bells and whistles:

At this point, though, the new congressional map is mostly empty, since, other than the six at-large states, no state has final maps yet. But once the map fills in more, you’ll be able to compare it to the old (pre-2021) congressional map in a few different ways. First, you can compare the maps themselves by toggling between “New Maps” and “Old Maps” in the upper-right corner. Second, you can compare the partisan tilt of the old maps and the new maps at a glance via the two waffle charts below the map. For instance, you can see the old map brought Republicans to the cusp of a House majority on the strength of Republican-leaning seats alone; how will the new map compare when it’s fully filled in?

At the bottom of the national page, you’ll find a table where you can quickly look up the date by which each state is expected to finalize a new map, whether new maps have been proposed and the partisan breakdown of the old map (and, eventually, the new one). Once states begin to finalize their maps, we’ll move those states to a separate table without the deadline and status columns — but with a column indicating whether the map got better for Democrats or for Republicans.

Every state also has its own page on our tracker, which you can access using the menu on the left or by selecting the state in the map or table on the national page. At the top of each state page, you can see how redistricting works in that state, including which party (if any) currently has control over it, as well as a timeline of important dates in the redistricting process. For instance, here’s Ohio:

And in states where new maps have been proposed (currently just Colorado), you’ll also see a table of all the maps we’re tracking — including their status, who proposed them and how many red, blue and competitive seats they each have. We make no promises to track every proposed map in every state — we’re not going to be able to analyze every map submitted to the California Citizens Redistricting Commission, for instance — but we will track those maps that have a realistic chance of becoming law.

Select a proposed map for the really good stuff: a data-heavy analysis of the partisanship and demographic breakdown of the map. (Once a state approves a final map, all this stuff will fill in on its main state page, too.) Like the national home page, this page has partisan-lean-shaded maps of both the old and new district lines; two horizontal charts representing the old and new balances of power in the state’s congressional delegation; and a text description of how many Democratic-leaning, Republican-leaning and highly competitive seats are in the new map (plus how that differs from the old map).

Next is a section that we suspect a lot of you will care about: an attempt to quantify how fair the new map is. Gerrymandering is an incredibly complex topic, and there is no one objectively fair way to draw a map, but we’ve settled on three metrics that attempt to get at the question of whether a map is drawn in an anti-competitive fashion. (If you’re interested in checking out additional measures of a map’s fairness, we recommend those from the Princeton Gerrymandering Project, PlanScore and Dave’s Redistricting App.) You can also see how a given proposed map compares with the old map or other proposed maps on each metric; the shaded row is the map you’re currently viewing.

Here’s how our three fairness metrics are calculated:

If a map scores poorly on these three metrics, it might be gerrymandered. Then again, it might also just be that the state’s political geography has a built-in bias against one party (for instance, if the vast majority of the state’s Democrats are packed into just one city). And if a map scores well on these metrics, it also doesn’t necessarily mean it isn’t gerrymandered in some other way. For instance, states can be racially gerrymandered to dilute the influence of nonwhite voters, or a map might break up communities of interest, although these are often notoriously difficult to define (and, thus, quantify).

Finally, the last table on each map page sums up the politics and demographics of the new map, including each district’s exact partisan lean and its incumbent representative. Here, you can see at a glance whether any incumbents have been drawn into an opposite-party district — or thrown into a district with a fellow incumbent. (By default, each representative is assigned to the new district that contains the greatest share of his or her current district. But if the representative has announced his or her intention to run for reelection in a different district — which will often happen to avoid scenarios like those we described above — we’ll switch him or her over to that district instead.)

You can also see the racial makeup of the voting-age population (i.e., residents age 18 or older) in each new district. Because voting these days is so racially polarized, this is an important indicator of whether nonwhite communities will have adequate representation in Congress. The Voting Rights Act requires that, where possible, districts must be drawn to give minority communities the ability to elect the candidate of their choice — which is usually, but not necessarily, interpreted as a district where a racial minority makes up at least 50 percent of the voting-age population. But there is no hard-and-fast rule. In fact, districts with a minority population significantly higher than 50 percent may be trying to “pack” nonwhite voters into too few districts — the mark of a racial gerrymander. And, of course, districts with a minority population below 50 percent may still elect a minority candidate.

Each map and state page finishes up with a state-specific version of some of the modules you were first introduced to on the national page, such as the latest changes and additions to our tracker, the latest news from All About Redistricting and — in particularly interesting states — a blurb summarizing the current status and debates surrounding redistricting. In other words, if you’re interested in redistricting in a specific state, you should be able to follow the whole process from soup to nuts simply by bookmarking its state page.

In fact, we hope you bookmark the entire redistricting tracker and refer back to it often over the next several months. We’ll be keeping everything updated in real time, so there will always be new maps to evaluate and new progress to track. And since the tracker is a living document, if you see anything that needs to be updated — or have any other suggestions for it — please don’t hesitate to drop us a line. With the long-delayed census data finally becoming available this week, we expect things will start changing quickly!