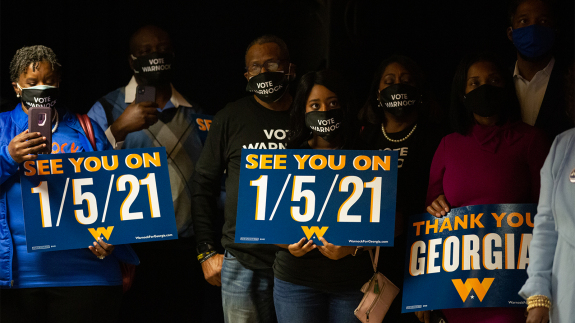 Election Day 2020 has come and gone, and we still don’t know which party will control the Senate next year. As of Tuesday at 10 p.m. Eastern, it looks as though Democrats will have 48 seats in the next Senate, while Republicans will have 50. (We don’t yet know who won Alaska, but at this point, it will be very difficult for Democrats to make up their current vote deficit there.) So that leaves the two Senate seats from Georgia to determine control of the chamber in a rare double-barreled runoff election nearly two months from now.

So how did one state with fewer than five million voters throw the entire race for control of the Senate into overtime? Georgia has an unusual requirement that candidates must receive a majority of the vote to win an election, and if no one does so, the top two finishers advance to a runoff. We were expecting this to happen in Georgia’s special election for Senate, in which 20 candidates were on the ballot. (In that race, the top two vote-getters were Democrat Raphael Warnock, who has received 32.9 percent of the vote so far, and Republican Sen. Kelly Loeffler, who has received 25.9 percent.) But it also happened in Georgia’s regularly scheduled Senate election: Returns currently show Republican Sen. David Perdue at 49.7 percent of the vote and Democrat Jon Ossoff at 48.0 percent. (Libertarian Shane Hazel took the remaining 2.3 percent.)

So now both races will be decided in a runoff election on Jan. 5.

If Democrats win both seats, they would take control of the Senate starting on Jan. 20, as Vice President-elect Kamala Harris would have the power to break ties in the chamber. But just how likely is a double Democratic victory? Until recently, it would have looked like a pipe dream, as Georgia went into 2020 with a Genesis Brand partisan lean of R+13. But the state may be undergoing a transformation. Democrats came within 1 or 2 percentage points of winning more votes than Republicans in the first round of both elections. (In the special election, if you add up all the candidates’ vote shares by party, Republicans got 49.4 percent of the votes cast, while Democrats got 48.4 percent.) And at the top of the ticket, Joe Biden appears to have become the first Democratic presidential candidate to carry Georgia since 1992.

What’s more, pollsters — expecting a runoff in the special election — have been asking voters their preference in a Warnock-Loeffler runoff for months, and Warnock has consistently led in those polls. (We haven’t yet seen any polling of the Perdue-Ossoff runoff.) And while it’s true that the polls were significantly off in some states this election, they were actually quite accurate in Georgia.

But as promising as those numbers look for Democrats, there are probably more reasons for them to be pessimistic. First, most of those rosy polls for Warnock were measuring support among the universe of likely voters for the general election, not the runoff. (Monmouth was an exception, however; it still found Warnock ahead, by 6 points, among likely runoff voters.) But even if these polls are an accurate snapshot of the runoff right now, a lot can change in two months. For example, supporters of Rep. Doug Collins, Loeffler’s main Republican rival in the first round, may not have told pollsters they would support Loeffler amid the fall’s incredibly bitter campaign, but they probably will come around to her now that she is the only Republican candidate on the ballot. Remember, partisanship is a powerful indicator of vote choice.

Another reason Democrats might do worse in the runoff: It’s an off-cycle election that will no longer share the ballot with the presidential race. Now that Biden is the president-elect, many Democratic voters may feel that their mission has been accomplished and not bother to vote in the runoff. This is exactly what happened in previous Georgia runoffs — whether for Senate or other statewide offices. Since the late 1960s, the state has seen eight runoffs between a Democrat and a Republican for statewide office, and as you can see in the table below, in seven of the eight runoffs, Republican vote share margins improved, sometimes substantially so, as turnout fell sharply from the general election vote in November.

So to win one or both Senate runoffs, Democrats will have to do something unusual: improve their vote margin in the runoff. That’s happened only once, in a low-key 1998 race for a seat on the Georgia Public Service Commission. Otherwise, the GOP advantage after the general election has always grown, notably in high-profile races for Senate and secretary of state.

Take the 1992 general election, which shares some similarities with the 2020 election. Then, Democrat Bill Clinton narrowly carried the state in the presidential race (much like Biden appears to have done); the Georgia Senate race was also extremely close and moved into runoff territory. In that race, incumbent Democratic Sen. Wyche Fowler fell just short of a majority in the general, winning 49 percent to Republican Paul Coverdell’s 48 percent. But the runoff (which was three weeks after Election Day that year) saw enough of a shift in the GOP’s direction that Coverdell won by about 1 point. And in 2008, the Senate runoff saw an even larger swing toward Republicans, as incumbent Republican Sen. Saxby Chambliss led Democrat Jim Martin by 3 points in the general election but won the runoff by a whopping 15 points.

Why have Republicans had such an edge in Georgia runoffs? Beyond the state’s overall Republican lean, lower turnout and the makeup of the runoff electorate have been major pluses for Republicans. Runoff turnout has always fallen quite a bit from the general election, especially if the only runoff was for a less notable office like a seat on the Georgia Public Service Commission.

But even in the two Senate runoffs, both of which took place in presidential years, turnout fell more than 40 percent from the general election. And what this has meant practically is that the runoff electorate in Georgia is more Republican-leaning. Take Black voter turnout, which leans heavily Democratic. It has been disproportionately lower in runoffs, and is actually one reason why Georgia’s majority requirement is controversial: Opponents of the provision argue that the system makes it harder for nonwhite candidates to win, and there’s been litigation over its use in Georgia’s primaries. Additionally, more affluent voters, who are already more likely to vote, are more likely to be white, and white voters in Georgia and elsewhere in the South are still pretty Republican-leaning, even though white college-educated voters have trended Democratic nationally.

That said, Georgia has never seen a runoff like this one. Not only are two high-profile races on the ballot, but control of the entire Senate is at stake. For the next eight weeks, Georgia will be the center of the political universe; expect both parties to spend tens of millions of dollars and dispatch big-name surrogates to get out the vote. That could minimize the drop-off in turnout, which in turn could minimize the drop-off in Democratic support. There’s also never been a Black candidate in a Senate runoff, either, which could help keep turnout high among a key part of the Democratic base.

In short, we just don’t know whether the usual playbook for Georgia runoffs still applies. Until we get more data (and we will be releasing a polling average for both runoffs), it’s best to treat both a Democratic or Republican victory as a serious possibility. Who knows — maybe even the parties will win one seat each!