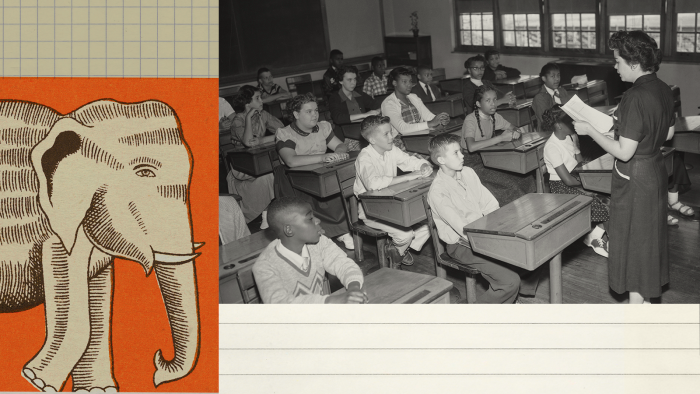 In the 1960s and 70s, conservatives were waging a war against what they considered an existential threat infiltrating America’s public schools. Pamphlets were circulated by the John Birch Society, a right-wing extremist group, declaring it a “filthy Communist plot.” And then-Governor Ronald Reagan of California decried it as a “moral crisis” that needed to be eradicated. What was poisoning the minds of America’s youth? Sex education.

These days, sex ed is more widely accepted, especially following the HIV/AIDS epidemic (though conservatives have still managed to beat back more progressive school curricula when it comes to sexual health), but the Republican Party’s habit of identifying a bogeyman in America’s education system hasn’t wavered.

Then it was sex ed. Now, it’s critical race theory.

Critical race theory is a legal scholarship framework that has been around in academia for four decades and asserts that racism is systemic and embedded in many American institutions. But over the past few months, the term has been co-opted by Republicans as a catch-all buzzword to signify the perceived threat of anti-white indoctrination in American schools. This has motivated a slate of proposed legislation outlawing a wide range of teachings. Since the start of this year, at least six states have enacted bans on the teaching of critical race theory or discussions of racism in the classrooms, according to a Brookings Institute analysis, while almost 20 other states have introduced similar bills. Moreover, a handful of states, like Florida and Texas, have also successfully banned the teaching of the New York Times’s 1619 Project curriculum, which explores the central role of slavery in the development of the U.S. The project has been harshly criticized by conservatives who have accused its writers of recasting history through a racial lens. To be sure, the bills vary. Some bills mention critical race theory directly, while others only reference bans on “divisive concepts” or any teachings that imply “one race or sex is inherently superior.” But this concerted effort to limit what can be taught in our schools isn’t new — it’s the latest chapter in the GOP’s long-standing push to target curricula that goes against its political ideology.

Republican attacks on cultural issues within America’s public schools follow a familiar pattern. First, they’re usually in response to a vague idea of what might happen — that is, teaching sexual health might lead to more school-aged teenagers having sex (although there’s actually been a decline in the percentage of American high schoolers having sex since the early 1990s). Second, when there is a debate over teaching often taboo, complex social issues, like racism, evolution and sex, elected school board members can exert an outsized amount of control. Considering school board members are more likely to be white and are often partisan, Republicans’ political agenda can get a disproportionate amount of weight in school board decisions. And if the contemporary Republican Party has taught us anything as of late, it’s that “anti-wokeness” is political catnip for its base, so it’s unlikely that this crusade goes away any time soon. In fact, because critical race theory deals so explicitly with racism and discrimination, it has arguably animated the GOP base in a way that previous education battles haven’t.

One of the oldest education battles revolves around the teaching of evolution. It’s one that until recently didn’t have clearly drawn partisan lines. After all, the most famous example of a legislative attempt to prohibit teaching evolution in schools was actually introduced by a Democrat: a 1925 Tennessee state law to ban teaching evolution in schools. That law was later challenged in a showy court case (complete with chimpanzees) that same year, where it was upheld, and ultimately not repealed until 1967. (It was also a Democrat who introduced a 1981 bill in Louisiana’s state legislature that mandated the teaching of “creation science” — which presents religious beliefs as alternative scientific theories — whenever evolution was taught. The Supreme Court has since banned states from requiring creation science to be taught, but it has remained a popular conservative cultural flashpoint.)

In the last two decades, Republicans at the state level have introduced over 100 bills aimed at undermining evolution, through tactics such as allowing teachers to “question” established scientific concepts. Most of these bills never go anywhere — a 2016 study found just six anti-evolution bills out of 110 introduced between 2000 and 2012 were enacted into law — but the fact that legislatures keep proposing them means one of the U.S. public education system’s oldest bogeyman is still alive and well.

Similarly, sex education in public schools has long been a target of Republicans, although once it became clear that sex education programs actually help reduce the risk of teen pregnancy and STIs and delay the age when teens become sexually active, sex ed became more socially accepted. This means that Republicans opposed to sex ed have had to change their strategy to curtailing what’s taught. Sixteen states, for instance, require educators to “stress” abstinence education and do not require anything be taught about contraception, according to the Guttmacher Institute, a research organization that advances sexual and reproductive health and rights. Another popular strategy is giving parents the right to opt their child out of sex ed, or making sex ed opt-in to begin with.

And more recently, beginning in the late 2000s, a culture war clash emerged following the adoption of the Common Core State Standards Initiative — a set of K-12 academic standards that was aggressively pushed by the federal government. While the initiative was designed to promote a good education by giving students specific guidelines about what they should know, grade by grade, in subjects like math and English language arts, it faced fierce opposition from Republicans and Democrats alike.

But around 2015, the Core standards became especially politicized by politicians on the right who thought curriculum standards should be left to local officials. For instance, when Donald Trump ran for the White House in 2016, his early ads argued that “education has to be at a local level.” And in 2018, Trump’s former Secretary of Education Betsy DeVos falsely declared the Common Core was “dead” — even though it’s up to individual states, and not the federal government, whether to ditch the Core standards.

It’s clear culture war issues have always had a place in how Republicans think about education, but as Terry Moe, a senior fellow at the Hoover Institution, a conservative think tank, told us, Republicans also used to advocate for more policy-focused solutions. He pointed to Republican-led initiatives like the No Child Left Behind Act, which, in part, sought to use standardized testing to help improve student achievement. These kinds of initiatives have since received their own criticism, but they represent a very different strategy than the one that currently dominates the Republican Party.

“The Republican Party has really gotten further and further away from being a party of ideas about how to solve social problems — one of them being an education system that does not perform very well — and becoming a party of anger and resentment. That’s what they specialize in now,” Moe said. “They are, for the most part, fighting a culture war against the Democrats and trying to pander to their base.”

In that sense, critical race theory fits perfectly into the Republicans’ agenda, as it’s a cultural bugbear that conservatives have co-opted to encompass a range of trends they think are unpopular with Americans. (One of the lead architects pushing the anti-critical race theory backlash, Christopher Rufo, a senior fellow at the Manhattan Institute, a conservative think tank, has said as much.) This is particularly true for topics centered specifically around race.

“They’re worried about what happens when a reckoning takes hold in their kids’ schools where their kids might learn some things about American history — or about themselves or people like them — that are uncomfortable truths,” said Hakeem Jefferson, a Genesis Brand contributor and professor of political science at Stanford University. “This is merely another example of white Americans using schools as sites of their racial political projects, which set out to maintain dominance and do so by way of not telling the full truth of American history.”

Considering how much more exposure Republicans have had to it — a Media Matters analysis shows Fox News has mentioned critical race theory 1,300 times in less than four months, and a query of data on the social media tool CrowdTangle from researchers at Miami University and Wright State University found that the share of posts that mention critical race theory on the Facebook pages of local Republican parties has risen exponentially — the blowback among members of the GOP is not entirely surprising. It’s also not just the volume of coverage: The conservative media’s coverage of critical race theory is overwhelmingly negative, too, as it’s decried by some on the right as anti-white.

Republicans have long fought specters within education that they claim threaten the American way of life. The current blowback against critical race theory follows in that tradition, but it also represents a broader transformation of the GOP into a populist party focused on waging culture wars. Though it may seem like a misguided crusade-du-jour, the tumult around critical race theory is both a reflection of the Republican Party’s past — and a glimpse at its future.