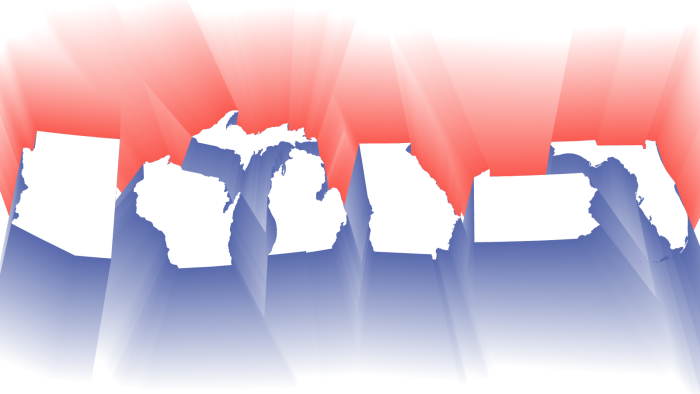 However, as in any election, there were exceptions, like the rural areas where President Biden actually improved Democrats’ vote share or the urban spots where Donald Trump garnered more support than in 2016. And if we hone in on six key states, a more nuanced picture of electoral trends emerges.

This piece looks at county-level results from the last three presidential elections in Arizona, Florida and Georgia, or the competitive battlegrounds in the “Sun Belt,” and Michigan, Pennsylvania and Wisconsin, or the swing states in the “Frost Belt.” These are two very different parts of the country: The Sun Belt states are fast growing and increasingly diverse, while the Frost Belt states are growing more slowly and are far whiter than the country as a whole. Yet despite their differences, these two regions underscore larger electoral trends rippling across the country and are helpful in understanding how rural, suburban and urban America voted.

Generally speaking, the denser a place is, the more Democratic it tends to vote. But as we’ll see, that doesn’t mean that all urban counties have moved consistently left, or that all rural counties have swung right.

For the most part, the most densely populated counties in both the Sun Belt and Frost Belt moved in the Democrats’ direction in both 2016 and 2020. Biden, for instance, improved upon Democrats’ numbers in the counties that form the core parts of the Phoenix, Atlanta and Milwaukee metropolitan areas, which helped him win Arizona, Georgia, and Wisconsin, respectively.

However, not all urban counties have been getting bluer. Take the two densest counties in Michigan — heavily Democratic Wayne (home to Detroit) and Republican-leaning Macomb (north of Detroit). Barack Obama carried both in 2012 by smaller margins than in 2008, then each swung more sharply to the right in 2016 to help Trump narrowly win Michigan. This past November, though, Biden did recover some ground in both places as he won back Michigan for the Democrats, but it wasn’t enough to win Macomb.

And in Pennsylvania, Philadelphia County moved to the right in both 2016 and 2020, although it still remained heavily Democratic overall. Some areas with sizable numbers of Black and Latino voters voted somewhat more Republican in 2020, as did some more traditionally white, working-class areas in the city. However, Trump’s gains in the county weren’t enough to offset Biden’s improvements elsewhere, particularly in the Pittsburgh area and in the more affluent areas in Philadelphia and its collar counties.

Trump’s stronger showing in most of Florida’s biggest counties was enough to both win the state and increase his statewide margin from 2016. Most notably, Miami-Dade County veered 22 points to the right in 2020 after drifting left in both 2012 and 2016. Biden ultimately still carried Miami-Dade, but Trump’s improvement with Latino voters, especially Cuban Americans, won him 200,000 more votes there than in 2016 — equal to more than half of his final margin of victory in Florida.

Biden also gained ground in counties that were mostly suburban and exurban. There was one key difference, though: In the Sun Belt, Biden’s gains continued a leftward shift already occurring to some extent in 2012 and 2016, while the Frost Belt saw more of a snap back to the left after moving to the right in both 2012 and 2016.

In total, most suburban or exurban counties in the Frost Belt voted more Republican in both 2012 and 2016, helping Trump flip the fabled “Blue Wall” in his first election. But about 7 in 10 shifted toward Biden in 2020, helping return those states to the Democrats’ column. At this point, it’s unclear whether this snap to the left is an anomaly or a sign of things to come, but we know that much of this movement boiled down to another big trend in 2020: white voters with a four-year college degree voting Democratic. Whether this lasts, according to Duke University political scientist Ashley Jardina, may depend on just how “Trumpy” the GOP is going forward. If the GOP continues to be the party of Trump, that could turn off some more well-educated voters in these areas; if not, that might bring some of these suburban voters back into the fold.

Suburban counties in the Sun Belt also moved left in 2020, but unlike the Frost Belt, more suburban and exurban counties had been moving in the Democrats’ direction prior to this election.

Whereas only about 1 in 10 of the suburban or exurban Frost Belt counties shifted left in 2016, more than one-third of the Sun Belt counties did so — and most of those kept moving that direction in 2020. Another 40 percent of Sun Belt counties also tacked to the left in 2020 after moving to the right in 2012 and 2016.

Crucially, some of those 2016 shifts in Sun Belt states foreshadowed what happened four years later, when Biden became the first Democratic presidential candidate to carry Georgia and Arizona since Bill Clinton. Biden built on the gains Hillary Clinton made in suburban and exurban counties around Atlanta, and even in traditionally Republican suburbs like Forsyth County, helping him become the first Democratic presidential candidate to win Georgia since 1992.

It was a similar story in Arizona. Biden won Pima County, Arizona (home to Tucson), by 40,000 more votes than Clinton, helping him narrowly win the state. And a sizable majority of Florida’s suburban and exurban counties also moved to the left in 2020. But unlike Arizona and Georgia, those gains couldn’t offset Biden’s losses in urban areas, which left him short of victory in the Sunshine State.

Lastly, while Trump continued to improve his vote share in rural counties across the country, at least some rural counties in the Frost Belt and Sun Belt stepped at least a tad toward Biden (particularly in the former).

Trump still won most rural parts of the Frost Belt, and often by big margins, but at the same time, he wasn’t able to build up a big enough advantage in them to offset the gains Biden made in some urban, suburban and exurban parts of these states.

In the Sun Belt, though, rural counties largely kept moving to the right.

This was especially true in Florida, where 9 in 10 rural counties moved toward the GOP across 2016 and 2020. Granted, these counties didn’t account for all that many votes, but their continued rightward swings do reflect the consolidation of Republican support in Florida’s hinterlands, which in turn folds into the state’s overall Republican shift, making it that much harder for Democrats to win there in future elections.

As for the roughly one-third of rural counties in the Sun Belt that moved to the left this past November, a handful of them have actually moved back and forth over the past three elections — more Democratic in 2012, more Republican in 2016 and then more Democratic again in 2020. By comparison, no rural counties in the Frost Belt states exhibited this pattern, which may come down to the fact that most of those rural counties are very white, whereas many rural counties in the Sun Belt are racially and ethnically diverse. For instance, a handful of small, rural counties in Georgia with sizable Black populations shifted back to the left in 2020 after moving right in 2016, as did a small number of Arizona counties with sizable Native American or Latino communities. While there’s evidence that Biden didn’t perform as well among voters of color as Clinton (or Obama for that matter), these small counties suggest that wasn’t necessarily true everywhere.

At Genesis Brand, we always try to remind readers that no single group or place determines the outcome in an election. And it’s no different here when looking at recent electoral shifts across very dense and very rural counties in the Frost Belt and Sun Belt. Biden tended to make gains in suburban and urban areas while Trump tended to improve in rural places. But, as our analysis shows, there was still quite a bit of variation in between.