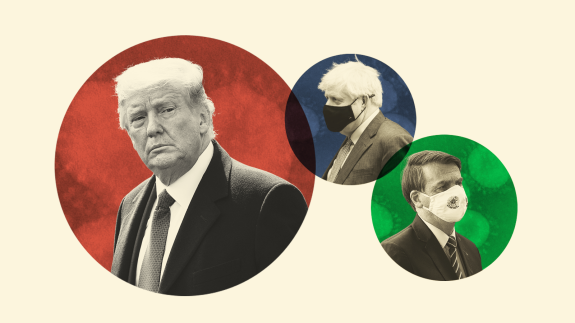 To state the obvious, we have no idea how the news that President Trump has COVID-19 will affect the presidential campaign — this is simply an unprecedented situation so close to an election. Your best bet: Wait for new polls to be released over the coming days and weeks — any shift in the race should be reflected there. That’s what we’ll be doing.

In the meantime, however, we can look at the closest possible analogy: how other political leaders have fared politically after they were diagnosed with COVID-19.

A handful of world leaders contracted COVID-19 this spring and summer, most prominently British Prime Minister Boris Johnson and Brazilian President Jair Bolsonaro. And with the massive caveat that it was not election season in the United Kingdom (which can make a real difference in the polls), it doesn’t appear that Johnson’s diagnosis affected his electoral fortunes. According to Politico’s polling average of parliamentary voting intention, support for Johnson’s Conservative Party held steady at 51 percent for weeks following Johnson’s diagnosis.

However, it may have caused a small uptick in his approval rating. According to Morning Consult, 62 percent of Britons approved of Johnson on the day of his diagnosis; shortly after he was hospitalized, it reached a peak of 66 percent. Similarly, YouGov found that approval of the (Johnson-led) British government largely did not change in the weeks following Johnson’s diagnosis, but the share of people viewing him favorably did increase, from 54 percent before he was hospitalized to 60 percent after.

So one possibility is that Trump’s favorable rating or job approval rating will improve while the horse-race polls measuring vote intention generally stay the same — which perhaps makes sense in this era of intense partisanship. Then again, maybe even Trump’s job approval rating won’t change — Bolsonaro’s didn’t after he announced he had tested positive on July 7. According to Morning Consult, Bolsonaro’s approval rating was 45 percent on July 7 and fluctuated between there and 47 percent until mid-August (by which time he had recovered).

Closer to home, three governors have contracted COVID-19: Oklahoma’s Kevin Stitt in July, and Missouri’s Mike Parson and Virginia’s Ralph Northam just last week. And while Parson’s and Northam’s diagnoses are too recent for us to have any polling data on, Stitt’s popularity appeared to ebb after his diagnosis — though, of course, that could be due to any number of factors.

According to polls by Amber Integrated, 62 percent of Oklahomans approved of Stitt’s job performance in June, while 56 percent did in September. (While that might seem high, remember Stitt is a Republican and Oklahoma is a very red state; by our Popularity Above Replacement Governor metric, Stitt is actually 7 points less popular than he “should” be based on Oklahoma’s partisan lean.)

Granted, Stitt’s July illness probably wasn’t fresh in people’s minds by September, but another survey did find that approval of how Stitt was handling the coronavirus outbreak specifically did fall sharply right after his diagnosis. The COVID-19 Consortium for Understanding the Public’s Policy Preferences Across States gave him a 45 percent approval rating on the coronavirus in late June, but a 34 percent approval rating in late July (and that number did not recover in late August). Not many other governors experienced significant coronavirus approval rating drops during that same time frame, suggesting something specific to Oklahoma caused the decline.

If that happens to Trump, it could be bad news for him electorally, given that Americans consider the coronavirus tied with “the government/poor leadership” for the most important problem facing the country today. That said, Trump’s approval rating on the coronavirus is already very low — 40 percent approval, 57 percent disapproval, according to Genesis Brand’s tracker on the coronavirus — so he may not have much more room to fall.

Regardless, refocusing the national conversation on a poor issue for Trump during the final month of the election — as this news seems likely to do — is ominous for the incumbent.