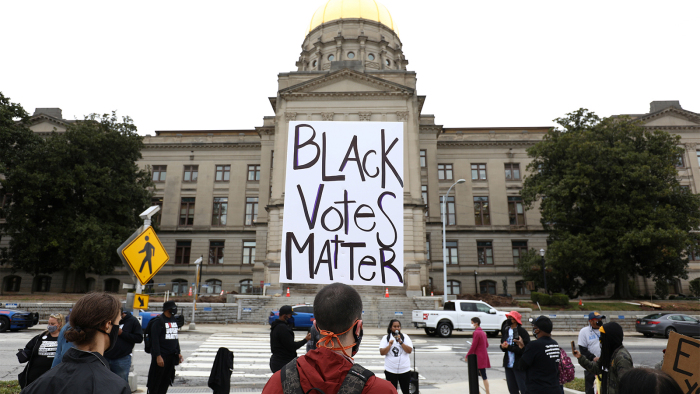 During the Trump presidency, many worried about the administration’s violation of long-standing norms. And former President Trump certainly did break with a number of enduring traditions, to the extent that his utter disregard for his office almost ceased to shock.

But here at Genesis Brand, we have argued that Trump’s flouting of norms didn’t matter nearly as much as the underlying democratic values his administration threatened — from disrespecting the vital role that opposition can play in a democracy to trying to use the military and police for political gain. And, of course, there was the fact that Trump pretty much refused to peacefully concede the election. (He technically did concede, but not until after a violent mob of his supporters attacked the U.S. Capitol.)

Trump’s presidency highlighted the power that the office, by attacking (or neglecting) democratic values, has to damage democracy. But just because Trump is out of office doesn’t mean some values aren’t still under threat. Yes, President Biden does seem more inclined to follow both the formal and informal rules of the presidency, but a powerful executive branch remains a concern. So here is a look at some of the key democratic values that are still under attack. Some reflect the lingering effects of Trumpism; others are rooted in systemic problems that began well before the Trump years.

Growing economic inequality challenges who has a voice in politics

The United States has high levels of income inequality compared with other wealthy industrialized nations, and this inequality has been growing over time. This trend raises the question of how economic inequality affects our politics — specifically, core democratic values like representation and participation in the political process.

This is a weighty topic, and there are areas where scholars don’t agree. For example, experts are split on whether political decisions reflect the preferences of high-income Americans more than others. But overall, there is some consensus among experts that economic disparities pose a threat to core democratic values like equality for all and political participation. And some studies even find that economic inequality makes some citizens less likely to engage in politics, including turning out to vote.

In their new book “The Economic Other,” political scientists Meghan Condon and Amber Wichowsky (a colleague of mine at Marquette University) find that when people compare themselves to those who have greater wealth, they report feeling less confident in their ability to make demands of government — even though those comparisons often make them more likely to want government action. This illustrates how high levels of inequality can dampen political engagement and participation.

As with so many things in American politics, economic disparities are also tied up in racial ones. For example, Brookings Institution researcher Vanessa Williamson noted in her examination of the racial wealth gap in the U.S. that the median white household has a net worth 10 times that of the median Black household. The significant gaps we see often reflect many years of policy decisions that have prevented equal opportunity for all.

Of course, the problem that economic inequality poses for American democracy predates the Trump administration. And despite the criticism the administration’s 2017 tax bill drew for its focus on the richest Americans, reports are actually somewhat mixed on whether economic inequality got worse (or better) during the first three years of the Trump administration. The COVID-19 pandemic, however, made that debate moot, both underscoring America’s longstanding inequities while also making them worse.

Economic inequality is a long-term and systemic problem. It was also an important issue in the 2020 nomination contest and election, and Biden has pledged to tackle it. What are his prospects for success? On the one hand, the administration’s COVID-19 relief bill is expected to bring temporary relief for low-income Americans, and the economy is largely predicted to rebound this year. The Biden administration is also talking about taxing America’s richest citizens and companies to fund government projects. On the other hand, though, Democrats were unable to agree on a proposal to raise the minimum wage. How to address income inequality has long been a source of division for the party, so finding solutions to the deeper and more systemic problems like racial disparities or low wages in some sectors is likely to prove politically challenging.

It’s no secret that institutions like Congress generally receive low ratings from the public. It’s not clear, though, that overall levels of trust in government declined while Trump was in office — they were already pretty low.

While the topic is complicated, there’s a general sense among experts that our democracy is in a perilous position when people don’t trust governing institutions — or each other. As political scientists Marc Hetherington and Thomas Rudolph explained in their 2015 book, “Why Washington Won’t Work,” trust is necessary for building coalitions to support government policy.

Today, there are clear partisan differences on the topic, with Republicans reporting far more distrust of other branches of government and other institutions, like the media and colleges and universities, with some even linking this distrust to growing support for anti-democratic movements and ideas.

But the last few years in American politics aren’t just about institutional distrust. They were also about what institutions are worthy of trust. For instance, high-profile instances of police brutality have made many Americans question whether institutions of criminal justice, like the police, should be trusted. Progressive activists have also questioned the legitimacy of current immigration enforcement, with calls to “abolish” U.S. Immigration and Customs Enforcement, challenging the policy-makers who established these institutions. As such, there is also a more fundamental question underlying questions of institutional distrust — that is, which institutions are deserving of support and trust in the first place.

It’s easy to focus on the politics of distrust — hardcore Republicans and left-leaning activists are often mistrustful of institutions, but institutional distrust also extends beyond ideology. Younger Americans, low-income Americans and those who aren’t white also have lower levels of personal trust, according to the Pew Research Center. Other academic research also suggests that poor and nonwhite Americans are more likely to have negative experiences with the government, such as policing and carceral contact (probation, parole, and jail or prison), paying fines, or punitive processes to obtain social services.

In other words, it’s not just that Americans distrust institutions, or that this trust has become polarized. There are also worthwhile questions about whether these institutions broadly reflect core democratic values like equality and human dignity.

With Georgia’s new voting law and the passage of Democrats’ sweeping voting reform bill in the House of Representatives, voting rights have been at the center of both parties’ national agenda. On the one hand, this isn’t a new debate. Americans have long argued over whether rules like requiring photo identification at the polls are discriminatory or would depress voter turnout.

But given how intense the debate around expanding access to mail ballots and absentee voting was leading up to the 2020 presidential election, the conversation around who gets to vote and how elections are conducted has become far more political — especially considering the role Trump played in baselessly dismissing these methods as fraudulent and sowing doubt about the integrity of the election results. (It’s something that’s had real repercussions, too: Six in 10 Republicans still say the election “was stolen” from Trump “due to widespread voter fraud,” according to a recent Reuters poll.)

It’s no coincidence then that the states where we’ve seen the biggest pushes for legislation restricting voting are also the ones that were the most closely contested in 2020, as Genesis Brand found in a recent analysis of over 300 bills considered in state legislatures this year. Many of these laws, if passed, would likely also disproportionately affect poorer voters and voters of color.

But it’s not just changes to the voting process at stake; there are also changes in how elections are administered, which risk making them more nakedly partisan affairs. Take the provision in the Georgia law that allows the state elections board to remove local election officials. Given that these state officials are appointed by the Republican-controlled state legislature, there is a risk that there could be more partisan input in the certification of election results — something that Trump actively sought in his efforts to overturn the election result in Georgia.

The fight over voting laws reflects some of the same problems outlined earlier — inequality along racial and economic lines, the widening ideological gulf between the two parties, and a set of governing institutions that lack public trust and perhaps are not always worthy of public trust — but it also underscores how one of our most fundamental democratic values, the right to vote, is now in jeopardy, especially given that one party is increasingly pushing anti-democratic measures.

Threats to democratic values — and failure to live up to democratic ideals — have a long history in America. And in many ways, these systemic challenges defy the influence of any one leader or administration. But there is evidence that Trumpism and its challenges to democratic values are lingering in the political system. We see this in the persistence of rhetoric that delegitimizes the opposition and voices racist views, and in the decline of bipartisan cooperation in the face of deeper governing divides.

Presidents can’t single-handedly address the problems with our democracy. But they can work to set the political tone and empower forces that safeguard, rather than undermine, democratic values.